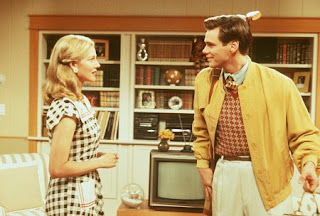 Note: A review from my preblogging days.

Do you want to be a star? Warren Beatty asked Madonna in Truth of Dare "What's the point of living if you're not on camera all of the time?" Garrison Keillor wrote a song that went "You better be a star, a star every minute / and that People magazine, you better be in it."

Jim Carrey lives out the ultimate star nightmare in The Truman Show, a frightfully plausible horror/comedy that logically explores the implications of our media culture. Adopted at birth by a corporation, Truman grows up surrounded by secret cameras hidden in buttons, mirrors, doors, radios, etc. Unbeknownst to him, all the world's a soundstage and he plays the lead in an immensely successful 24 hour C-span-like TV show.

He lives on an idyllic island reminiscent of those new Disneyworld housing developments where people live out safe Cracker Barrelesque lives in a ghastly perpetually deathless Happy Days rerun. It's the best of all possible It's a Wonderful World for Truman, but something's amiss. Why did a studio light fixture fall from the sky? Why did his long dead dad reappear as a homeless man, just to be whisked away? Why does the one love of his life Sylvia (Natascha McElhone) say that she's not supposed to speak to him? (She's not part of the script.) It turns out that a subversive political organization has been trying to break onto the set for years to tell Truman what's up, and now he's starting to suspect something.

Director Peter Weir approaches this elaborate conceit carefully by plunging us into the TV show at the beginning of the movie. We watch Truman go through his everyday routine and all of the odd camera angles constantly remind us that we're spying on him. We get implicated in the vicarious enjoyment of invading a man's most intimate privacy.

Like John Travolta in The Boy in the Bubble, Carrey has no trouble playing the one real person in a world full of fakery, and he cuts up on occasion, but this is essentially a prison break movie from an alternate reality. Smile and play the game of being a happily married insurance salesman and he's okay. Begin to walk off the prescribed path of his role and he discovers catering services for actors where an elevator should be, walls of flames on the perimeter of the island, and fake doctors incapable of performing surgery.

The movie carries such quiet force because it comments directly on our heavily-media-influenced lives. If you devote 40% of your day to the fictional pleasures of TV, movies, novels, video games, etc., aren't you living in a world of contrived appearances much as Truman does? With all of the technological developments in surveillance--hidden cameras in banks annd ATM machines, people spying on email accounts and social security records--are we much less spied upon that Truman? If the movies help define our dreams, can't they entrap us in their "reality"?

Peter Weir said that he intentionally stayed away from the metaphorical implications of The Truman Show while rewriting and directing the movie, but the plot reverberates much like a Kafka story, raising far more questions than it answers. How much do our lives resemble advertisements? If people imitate movie stars, how much of their identity remains? The Truman Show suggests the boundary lines between the real and the simulated are much more fragile than we think.
Labels: The Truman Show

Anonymous said…
Your early reviews are just as insightful as your recent ones.
December 21, 2008 at 2:34 PM

Anonymous said…
The Warren Beatty quote in context was a criticism of Madonna's insane need to be filmed:

Warren Beatty: [after Madonna declines to talk to her doctor off-camera] She doesn't want to live off-camera, much less talk. There's nothing to say off-camera. Why would you say something if it's off-camera? What point is there existing?

The Film Doctor said…
Thanks for clarifying the Beatty quote, Anonymous. I like Beatty's seemingly infinite self-consciousness in front of a camera, and the way he knew how to shape his image so well as a producer and star of Bonnie and Clyde.
December 23, 2008 at 9:02 AM