6 notes on the mysteries of It Happened One Night 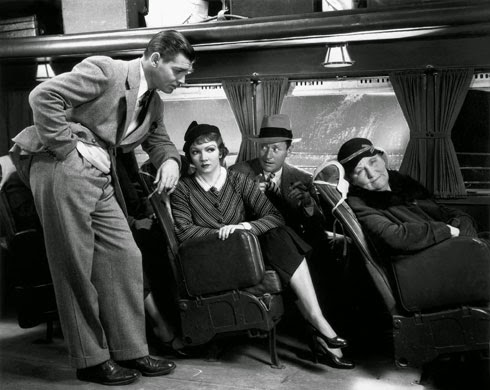 1) Why one night? Peter Warne (Clark Gable) and Ellie Andrews (Claudette Colbert) meet at night on the bus to New York, spend the night in a hotel, fall in love (perhaps) outside by some hay bales on a farm, and consummate their marriage when the wall of Jericho finally tumbles (a blanket strung between two beds in an auto camp). Which night is the movie's title referring to? The film never specifies. Later, Frank Capra moved on to much more straightforward titles like Mr. Smith Goes to Washington (1939). Why is he being so indeterminate here?

2) Why do so many goofball Americans keep breaking into song in the course of this movie? Why do they sing so often with increasing derangement? Even Peter Warne sings while driving back from New York late in the movie (but he's fallen in love by then). The true oddball is a guy named Danker (Alan Hale, the father of the skipper in Gilligan's Island), who sings whatever comes to mind loudly and pointlessly after picking up Peter and Ellie in his jalopy. Did Frank Capra want to shoot a musical? Is all of the singing some sort of coping mechanism for the Depression? Lastly, does Cameron Crowe allude to the "Flying Trapeze" business in the "Tiny Dancer" scene in Almost Famous (2000)?

Then again, the night scene in which everyone on the entire bus gleefully sings along to "The Daring Young Man on the Flying Trapeze" demonstrates how anyone in Capra's world can take the limelight, even if for only the second verse. The essential democratic aesthetic of that scene stands out when you compare it to the many romantic comedies such as 27 Dresses (2008) where all the extras can do is look on as the two leads demonstrate their love over and over and over in one public forum or another, each audience on camera somehow legitimizing the one watching in the theater.

3) What's the deal with the water theme? After Ellie escapes from her dad's yacht by swimming away, she has trouble keeping herself from getting soaked in the rain en route to New York, causing Peter to say she's as "helpless as a baby." Later, Peter protects Ellie from getting drenched in a downpour by loaning her his raincoat. After the bus plows into a rainy ditch, Peter carries Ellie over a stream while lecturing her about proper piggybacking. Also, Ellie says she would like to be a plumber's daughter. Is Ellie's working class redemption a matter of getting baptized over and over? She learns of the ways of the common folk by having to stand in line at an auto camp before taking a shower. Did the movie's writer Robert Riskin have water on the brain?

4) What should we make of Peter's various lessons in proficiency? He shows Ellie how to properly dunk a donut in coffee (again, the liquid theme), given that she tends to overdunk and thereby threaten the donut with dissolution (just as she threatens to get overly wet early on). Later, Peter lectures her on hitchhiking techniques and proper piggyback riding (pointing out that Abraham Lincoln was a "natural born piggybacker"). He also gives Ellie a lesson in how men undress. Perhaps all of these lectures logically culminate in Ellie flashing her legs to get a car ride, thereby exposing the fundamental flaw in all of that masculine knowledge, i.e. "the limb is mightier than the thumb."

5) Throughout It Happened One Night, alcohol is used as a kind of salve, comforting Ellie at home when she knows that she's marrying the wrong man, providing Peter with a good drunk when his plans go awry, and even giving Ellie's father Mr. Andrews (Walter Connolly) a means to celebrate his daughter marrying the right man. We first see Peter drunk as he tells off his editor on the phone in front of his drunken newspaper reporter peers. Throughout all of this therapeutic tippling, is the movie celebrating the end of prohibition?

I also wonder how much the movie's enduring appeal may be due to Capra's Depression-era emphasis on hunger. Ellie begins the movie in the midst of a hunger strike that betrays her manipulative contempt for her father's control. In the midst of her revolt, she throws over a silver tray holding a steak dinner, but later, ironically, she deals with her gnawing appetite as she's obliged to sleep outdoors on a farm with Peter. We also witness a mother on a bus passing out from hunger after she and her son run out of money, a melodramatic scene that still shows how Americans had to get used to any stranger around them being ravenous in 1934. Peter handles the situation on the farm by grabbing some carrots out of the garden, but "spoiled brat" Ellie still refuses one. She takes until the next day to finally capitulate by sullenly eating a single carrot in the jalopy as Peter drives. Perhaps this undertone of starvation gives It Happened One Night its particular edge. The central couple have more fundamental drives to contend with than the usual one of falling in love. 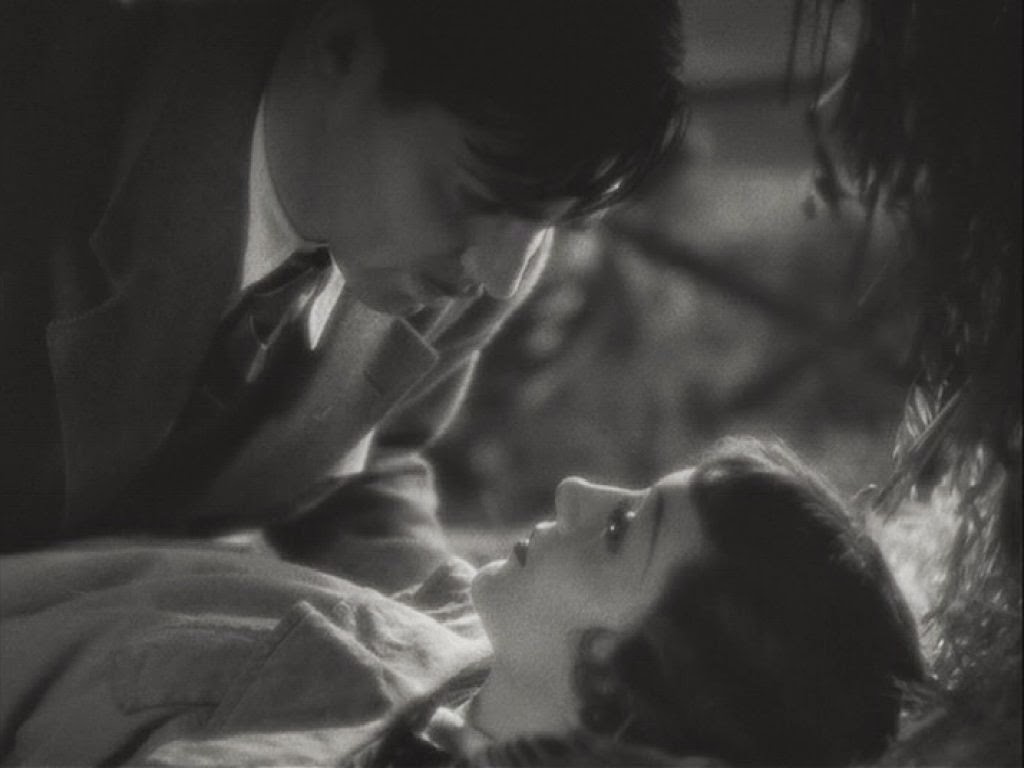 6) As a kind of reverse Cinderella, Ellie cheerfully assimilates with the common man. Her pleasure in roughing it flatters the audience with the impression that the rich envies them. It Happened One Night posits that a cheap bus ride is preferable to all of the Great Gatsby-esque wealth of Mr. Andrews' mansion. What was once youthful rebellion now becomes a media show (during the would-be wedding with King Westley (Jameson Thomas) with Ellie's father's secret approval). The newspaper montage, the many headlines proclaiming Love Triumphant reminds me of similar claims to fame in Philadelphia Story (1940), Stripes (1981), Tootsie (1982) and innumerable other movies where the characters must enjoy or suffer a mass media amplification of their story to be worthy of our attention. Regardless, Peter never does appear to publish his inside scoop about the runaway heiress, and the real romance is (as far as we know) never written about. Instead, the couple disappears discreetly in Michigan. As the newspapers falsify everything, Peter and Ellie's love story is reserved for the movie viewers only.
Labels: It Happened One Night

DeadSpiderEye said…
The Daring Young Man... once you've seen the snap of Mr. Leotard in the eponymous garb, before modesty dictated the inclusion of a skirt, you'll spot the inspiration for the lines in the second verse:

"...But I could not please her one quarter so well
As the man upon the trapeze"

The Film Doctor said…
I hadn't thought of that.

I'm always freshly astonished that Capra (and the movie) has the time to linger with these random bus riders as they perform in turn each verse of the song. What recent film would allow such random extras a moment to stand out in this way? A true vision of egalitarian fame.
March 4, 2015 at 4:46 PM

Joe Powell said…
I've read previously the "Flying Trapeze" number wasn't scripted, Capra came up with the idea on set and improvised the scene. And it was remade twice as a musical -Eve Knew Her Apples (1945) starring Ann Miller and You Can't Run Away from It (1956) starring June Allyson and Jack Lemmon.
March 5, 2015 at 10:48 AM

Joe Powell said…
read the Trapeze section was totally improvised on set by Capra - it was remade twice as a musical.
March 6, 2015 at 11:58 AM

The Film Doctor said…
Thanks, Joe.

I guess that keeps me from reading too much into it. Perhaps that sense of spontaneity is what gives the scene its kick.
March 16, 2015 at 7:56 PM