Iconography and the Yammering Haters: a Review of Taylor Swift's "Look What You Made Me Do" Video

As someone who remembers the flowering of the music video during the 1980s and the ascendance of figures like Madonna and Michael Jackson as they newly explored the form, I usually don't have much to say about the dull marketing calculations of recent music videos. A typical example would be Katy Perry's recent "Swish Swish," a forgettable video that alludes to Space Jam (1996) to little effect. Full of celebrity cameos, sight gags, and grotesquery, "Swish Swish" exemplifies the contemporary degrading cartoon Idiocracy attention-seeking visual internet squalor that does not linger in the mind.

Taylor Swift's "Look What You Made Me Do" video, however, strikes me as something else. As Anne Helen Petersen points out in her Buzzfeed essay "The Great White Celebrity Vacuum," Swift largely has not produced much new work during the last six months, and the "Look" song and video mark her return to the public eye with multiple iconographic images that point back to her previous incarnations and personae. In dramatic contrast to the relative sweetness of, say, "Shake It Off" (2014), "Look What You Made Me Do" comes across as a vindictive, fierce, and paranoid Swift interrogating her own media image with every millisecond of the video seemingly test-marketed for maximum meme-worthy impact, and I like the semiotic intensity of it all (without pretending to get the many, many references to incidents in her highly publicized and debated past). Swift has arrived at a cold and angry level of fame, but the video also asserts the power of her celebrity. After all why would someone cut the wing off of a jet marked "REPUTATION" with a chainsaw? In comparison to Perry's slippy hijinks, Swift's "Look" is hagiographic--all about power with her dominating every shot composition in a triangular tableau that reminds me of some of evil robot Maria scenes in Fritz Lang's Metropolis (1927) which Madonna also used to good effect in her "Express Yourself" video. 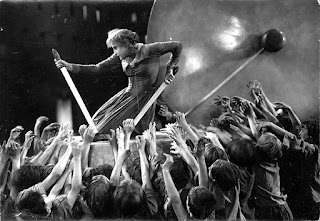 After a humorously Gothic beginning with Swift's zombie alluding to Jackson's "Thriller" video, she digs up the grave of her reputation (a reply to Petersen's essay), then reappears in a bathtub full of jewels before assuming her throne with a bunch of snakes giving her tea. I've read of how all of this imagery alludes to various celebrity tiffs, put downs, when its isn't ripping off other videos, but I enjoyed imagining other reasons for snakes, a Cleopatra/Britney Spears reference, perhaps? Has Swift's fan base and internet buzz become the same kind of writhing vicious commentary, a perpetually petty yammering chorus of snark (such as one finds on Twitter, for instance) aspiring for influence on a staircase? In The Circle, one can find a good depiction of this chorus when Emma Watson's character Mae chooses to go fully "transparent" for her Mark Zuckerberg-esque mentor Bailey (Tom Hanks), allowing herself to experience the ultimate celebrity nightmare of being on a continual internationally-accessible video feed from when she wakes up in the morning until she goes to bed at night. When she does so, everyone who follows Mae constantly comments on everything she does with a creepy tweet-like relentlessness that shows how horrific contemporary media exposure can be. Not only is Mae drastically over-exposed, everyone else is reduced by the movie's Facebook-like social media to endless miniaturized bickering commentary, all of it fed by the need for attention coupled with the dictates of social media engineers ("oligarchic platform owners") profiting over human gullibility and cell phone addiction. 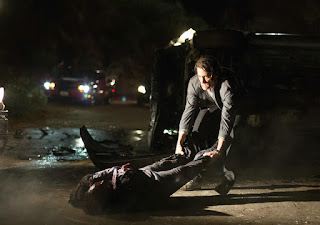 Then, the "Look What You Made Me Do" video cuts to a car accident with Swift suddenly looking a lot like Katy Perry as she's thrown onto the dashboard and steering wheel before paparazzi arrive to pruriently photograph her. I enjoy the way the shot evokes the twisted aesthetics of Jake Gyllenhaal's work in Nightcrawler (2014) and its emphasis on just how sick the public has gotten to be as it sates itself on images of car crashes, death warmed over for the evening news, all of it making J. G. Ballard's Crash (1973), and by extension the Cronenberg 1996 movie adaptation, a documentary prophecy rather than a novel.

It's also fun to see Swift serve up her power-play with Spotify as a robbery with other women in cat masks. In that moment in a video full of expensive sets rapidly deployed, Swift wields a baseball bat as she robs the streaming service, at one point holding up a stack of burning money. Does this shot intend to refer to the Heath Ledger's Joker and his nihilistic burning of money in The Dark Knight? Ultimately, Swift did win her feud with Apple Music when they, in Kaitlyn Tiffany's essay, "agreed to pay royalties to everyone during its free trial." So, does that count as a robbery with money to burn? At any rate, the shot does show off Swift's power to affect big business with her marketing decisions. 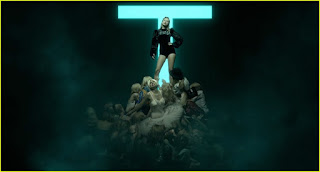 In the end, I still don't get why Swift's persona feels obliged to cut off the wing of a jet with a chainsaw, but the image has a gleeful destructiveness. So, yes, Swift's newest incarnation stands before a lit cross-like T as her earlier media selves squirm and fall down below, but one could also say that's an image of the celebrity celebrating a video that quickly breaks records across the world, no matter what others say or tweet or post, etc. Whatever her faults, with these kinds of images, Taylor Swift reminds the viewers where we stand or fall in the vicious hierarchy of celebrity.
Labels: Look What You Made Me Do Taylor Swift