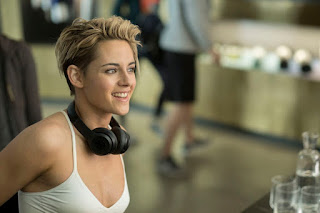 1) Charlie's Angels proved difficult to sit through. My partner, Beckie abandoned it quickly in part because she found the music grating. I kept stopping the Blu-ray player, wandering off, and then returning later out of idle curiosity to watch it in bits and pieces.

2) I generally have high regard for the career choices of Kristen Stewart, especially her work with the brilliant Olivier Assayas in Clouds of Sils Maria (2014) and Personal Shopper (2016), but she mostly looks semi-ironically bemused in this movie. Much of Charlie's Angels came across as forced and mechanical when it wasn't making serious errors in terms of keeping the viewer's interest. The movie begins with Stewart as Sabina Wilson seductively pointing out to the male millionaire soon-to-be her victim that "it takes men an additional seven second to perceive a woman as a threat compared to a man. Isn't that wild?" But then, the film cuts abruptly to a dull retirement party for the titular Bosley of this version of the franchise (Patrick Stewart). Someone gives him a watch. The original Bosley of the TV series was played by the younger goofball David Doyle. Later in 2000, Bill Murray starred as Bosley in the playful McG version with Cameron Diaz, Lucy Liu, etc. (which had a fun scene with Crispin Glover as the "Thin Man"), but Patrick Stewart ill-fits the role now, and why switch over from a glamorous Kristen Stewart to a smug-looking Patrick Stewart as people applaud his character for a career as Bosley we know nothing about? Patrick has a glowering and overfamiliar intensity that's out of place. I hear that Elizabeth Banks had trouble attracting top talent to the movie. Did Patrick Stewart only agree to be involved if he gets introduced with gravitas early on? After that retirement party misstep, the momentum of the movie never really recovers. 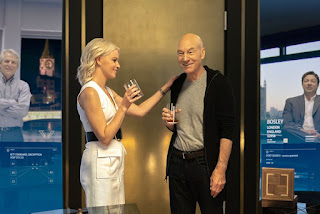 3) Ella Balinska distinguishes herself as Angel Jane Kano, but her role comes across as underwritten. Naomi Scott plays the naive but intellectual newbie Elena Houghlin. I don't remember all that well whatever action set pieces follow after that retirement party. When the movie's director and screenplay reviser Elizabeth Banks appears as Bosley with some frequency (the movie has many Bosleys), I thought fondly of Hitchcock's brief cameos in his films, and how smart he was limit his appearances to just that.

4) Kristen Stewart appears later in disguise as a jockey for a horse race that reminded me of Hitchcock's Notorious (1946). Given that another scene was set in Rio de Janeiro, the main location of Notorious, I imagine that Banks meant to refer to the former classic. 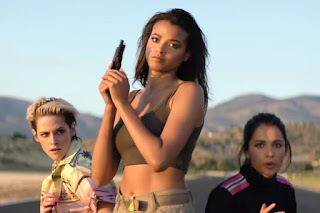 5) That's about all I remember (I saw the movie a few weeks ago). Since then, I've rewatched The Grifters (1990), which holds up extremely well, To Catch a Thief (1955), North by Northwest (1959) which my whole family tends to study and recite lines from as if it is the Bible, the generally very good Pride and Prejudice with Keira Knightley (2005), Bridesmaids (2011), a recent comedy classic with an amazing performance by Kristen Wiig, and the brilliant and surprisingly unerotic Hustlers with Jennifer Lopez who deserved a nomination for an Oscar as Best Actress for her work in that movie.

6) Perhaps I should have reviewed Charlie's Angels sooner or not all. It may have been more polite to just let it go by in the relentless streaming of distracting entertainment as our theaters go bankrupt, the unemployment rate skyrockets, and people in our neighborhood go for walks outside in this pleasant spring weather. Hailee Steinfeld does show up late in the movie for a cameo as a trainee for the Angels Academy. I plan on rewatching her early work in True Grit (2010) soon.
Labels: Charlie's Angels Elizabeth Banks Ella Balinska Hustlers Jennifer Lopez Kristen Stewart Naomi Scott Olivier Assayas