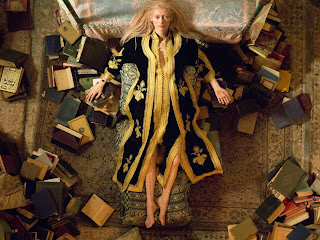 ---"'We hardly saw any living things. We saw one whale, sort of rolling helplessly on the surface with what looked like a big tumour on its head. It was pretty sickening.'

'I've done a lot of miles on the ocean in my life and I'm used to seeing turtles, dolphins, sharks and big flurries of feeding birds. But this time, for 3000 nautical miles there was nothing alive to be seen.'

In place of the missing life was garbage in astounding volumes." --Greg Ray

---blooper reels for Star Wars, Back to the Future, and Silence of the Lambs

---The Eye of the Beholder

---"The nagging, omnipresent digital media have produced a version of the Attention Deficit Disorder that psychologists began identifying in children decades ago: Continuous Partial Attention (CPA). A former Apple employee, Linda Stone, coined the term in 1998, differentiating it from multitasking, or the pairing of a 'fairly automatic' activity, such as eating lunch, with one requiring concentration, such as making a phone call. CPA results from 'a desire not to miss anything,' to be plugged into sources keeping us 'in the know' and, artificially, at high alert. Between smartphone, laptop, e-reader, Twitter, Tumblr, and YouTube, says novelist Walter Kirn, we’re like the 'stiff-backed lady operators' in old movies, 'rapidly swapping phone jacks from hole to hole as they connect Chicago to Miami, reporter to city desk, businessman to mistress.'" --Thomas L. Jeffers

---the titles of animated films and video games

---"For me there’s no question that cinematically ON HER MAJESTY’S SECRET SERVICE is the best Bond film and the only one worth watching repeatedly for reasons other than pure entertainment (certainly it’s the only Bond film I look at and think: I’m stealing that shit). Shot to shot, this movie is beautiful in a way none of the other Bond films are—the anamorphic compositions are relentlessly arresting—and the editing patterns of the action sequences are totally bananas; it’s like Peter Hunt (who cut the first five Bond films) took all the ideas of the French new wave and blended them with Eisenstein in a Cuisinart to create a grammar that still tops today’show fast can you cut aesthetic, because the difference here is that each of the shots—no matter how short—are real shots, not just additional coverage from the hosing-it-down school of action, so there is a unification of the aesthetic of the first unit and the second unit that doesn’t exist in any other Bond film. And, speaking of action, there are as many big set pieces in OHMSS as any Bond film ever made, and if that weren’t enough, there’s a great score by John Barry, some really striking sound work, and what can you say about Diana Rigg that doesn’t start with the word WOW?" --Steven Soderbergh

---trailers for Years of Living Dangerously, Only Lovers Left Alive, X-Men: Days of Future Past, The Wolf of Wall Street, The Immigrant, Captain America: The Winter Soldier, and Robocop

---David Thomson's Moments that Made the Movies 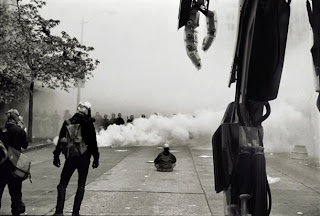 ---Richard Linklater on cinema and time

---How Calvin and Hobbes Inspired a Generation

---"There is a kind of audacity in something like Lincoln, in which important white men get discursive about the moral quandary in which slavery mires the country. That debate required men to search their souls and vote accordingly. But after enough of these movies, you're just hot with insult. You have to stop accepting apologies, accepting, say, The Help, and start demanding correctives, films that don't glorify whiteness and pity blackness, movies — serious ones — that avoid leading an audience to believe that black stories are nothing without a white voice to tell them that black people can't live without the aid of white ones.

McQueen and Ridley turn that dynamic inside out. Their movie presents the privilege of whiteness, the systematic abuse of its powers, and black people's struggles to get out from beneath it. A different movie might have taken this story and turned it into a battle between Epps and the white men who feel a duty to free Northrup. That's what we're used to. There have been complaints that the movie is too violent, that it depicts too many lashings, too many cruelties, too much interracial abuse, that all the gashes on all the backs (what Toni Morrison poetically described as chokecherry trees) are just too much. But that's a privileged concern." --Wesley Morris

---The Walking Dead: A Decade of Dead

---how an SNL parody trailer gets made

---The Federal System of Biometric Identification