"Follow the instructions or you'll be put to sleep": 13 questions about The Lego Movie 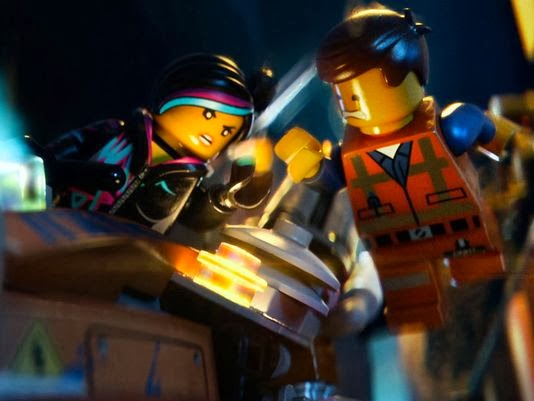 1) How can a children's film about toys be so thought-provokingly metamodern, postmodern, self-reflexive, and hyper-referential?

2) Is The Lego Movie profound?

3) How does The Lego Movie advertise for a toy company and simultaneously intrigue the adult viewer with its coded references? Shouldn't we be objecting to a film with the bald crassly commercial title of The Lego Movie? How can such a terminally ironic title prove so liberating?

5) How does the brainwashed conformist figures (including our hero Emmet) in Bricksburg reflect the dystopian world view of They Live (1988)? How much does The Lego Movie suggest that we are all brainwashed by corporate-controlled popular culture (which would logically include the advertisements to go watch The Lego Movie)? For example, when Wildstyle asks Emmet about his favorite restaurant, Emmet replies "Any chain restaurant."

6) How much is Bricksburg a testament to the moronic homogenization of corporate-controlled culture? Is the movie's TV show Honey, Where Are My Pants? a reference to the futuristic stupidity of Idiocracy (2006)?

8) How does the free-wheeling seemingly-subversive ideology of The Lego Movie make the lumpen militaristic Navy-advertising stupidity of Battleship (2012) and the sterile plastic machismo of G. I. Joe: Rise of the Cobra (2009) that much more despicable?

9) How do President Business' robot micromanagers comment on the evils of repressive corporate domination?

10) Why does Bad Cop's snarl strongly resemble that of Dick Cheney? Does President Business' nefarious practices (which include torture) mirror Bush-era foreign policy? 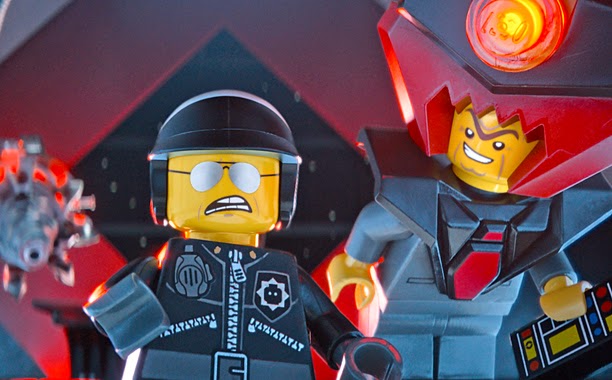 11) What is the ideology of The Lego Movie? As President Business says, "Follow the instructions or you'll be put to sleep." Does the film suggest that creative play is the only way to break free from the thought control of corporate co-optation?

12) When one visits a Toys"R"Us, one finds a massive amount of its shelf space devoted to expensive box sets of Lego toys. How much does The Lego Movie reinforce its parent company's agenda?

13) Jonathan Franzen writes that "Technological consumerism is an infernal machine." Is The Lego Movie compelling because it pretends to subvert the very thing that lies behind its creation?
Labels: corporate control Everything is Awesome The Lego Movie

Anonymous said…
My question is: why do so many think this is a subversive film? Doesn't the film support the notion that you can be an individual through consumerism? That is, there's something for everyone in the marketplace and what you buy helps differentiate you from others? What you buy makes you different and special. Even someone such as Adam Curtis made a doc about this: The Century of the Self. The Lego Movie also reflects real Lego subculture where "master builders" spend oodles of money on boxed Lego sets, but combine different ones to create their own unique creations. Lego stores also sell assorted bricks that come sans instructions.
February 16, 2014 at 3:13 PM

The Film Doctor said…
The Lego Movie is subversive because it demonizes the cultural standardization of a corporation/government even as it sells the products of a corporation. As Abramson points out in his "Metamodernism" essay, one can interpret the "Everything Is Awesome" song as both celebratory of everything being awesome or the "anthem of a repressive authoritarian state." I naturally lean towards the latter interpretation. In so many ways, by foregrounding surveillance, brainwashing, the mind-control of television, the manipulations of Starbucks, etc., the movie depicts a dystopic vision that would normally be the opposite of good wholesome advertising for children, and yet it's also advertising a plastic product for children, even if it also makes one question authority in the process. Just by making me intrigued by its one hour and 40 minute ad, it seems subversive. It is as if some large measure of a truthful funhouse mirror of our culture snuck through the sales pitch.
February 16, 2014 at 7:41 PM

Roderick Allmanson said…
The film isn't totally about embracing unbridled creativity, either. When all the master builders did their thing, it was a total mess because all their own individualistic viewpoints couldn't gel and they had no teamwork. The film is obviously anti-corporate standardization as well. I'd say it does a nice job rotating around Emmett who find the best of both worlds to come to a compromise of subduing the sheer chaos of individualistic desires but also becoming a person capable of independent and creative thought.
February 16, 2014 at 11:28 PM

The Film Doctor said…
Yes, I agree, yet Emmet is something of a nonentity designed to make anyone feel good with being a nonentity who also happens to be the "special" just as Neo is in The Matrix. Critics have mentioned that the "chosen one" narrative device is also ironically treated, but I'm not so sure. It all seems to be designed to get the viewer to identify with the nobody who wins random religious awe for not much reason. Chris Miller and Phil Lord do what they can to reinvent or recalibrate such a tired idea, mostly by finding humor in it.
February 17, 2014 at 11:27 AM

The Film Doctor said…
The Lego Movie includes a TV show entitled Honey, Where Are My Pants? that repeats the same dumb joke over and over. It reminds me of Ow My Balls! in Idiocracy, but I'm sure there are other similarly mindless shows that one could think of. Honey, I Shrunk the Kids also comes to mind.
February 18, 2014 at 10:20 AM