Between rage and sympathy: a review of Jonathan Franzen's Purity 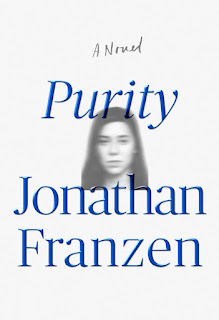 For whatever reason, I developed a serious taste for Jonathan Franzen's work over the summer, rereading and admiring his The Corrections (2001), kind of enjoying his footnotes in the obscure The Kraus Project (2013), and now rereading his new book Purity and reconsidering my initial distaste for its sometimes surprisingly commercial blend of murder, East German Stasi intrigues, and a really annoying feminist character named Annabel who argues with her husband Tom in a tinny, righteous, hectoring way for too many pages. Annabel proves so overpowering a presence in the novel, I've started to wonder if Franzen decided to distill all of his prickly intolerant overbearing tendencies into one insufferable woman.

But, then again, I like Franzen's Cassandra-like rage against the demented, distracted, and delusional quality of postmodern life. When he's grinding his axe on a topic like overpopulation and our collective blindness to the seriousness of its effects on the environment, it almost makes up for the overly drawn-out romantic triangle plot of Freedom (2010). At times, Franzen seems dead on target with a rant like this from The Kraus Project:

"I could, its true, make a larger apocalyptic argument about the logic of the machine, which in Kraus's day was still localized in Europe and America but has now gone global and is accelerating the denaturization of the planet and sterilization of its oceans. I could point to the transformation of Canada's boreal forest into a toxic lake of tar-sand by-products, the leveling of Asia's remaining forests for Chinese-made ultra-low-cost porch furniture at Home Depot, the damning of the Amazon and the endgame clear-cutting of its forests for beef and mineral production, the whole mind-set of 'Screw the consequences, we want to buy a lot of crap and we want it cheap, with overnight free shipping,' and the direct connection between this American mindset and a new Chinese prosperity that--in a classic Krausian collision of old values with new valuables--funds the slaughter of millions of Pacific sharks for the luxury of their fins and tens of thousands of African elephants for their ivory. And meanwhile the overheating of the atmosphere, meanwhile the calamitous overuse of antibiotics by agribusiness, meanwhile the widespread tinkering with cell nucleii, which may prove to be as disastrous as tinkering with atomic nucleii. And, yes, the thermonuclear warheads are still in their silos and subs" (274-5).

Meanwhile, Purity mostly focuses on the story of a 25 year old woman named Pip who sometimes reminds the reader of her namesake in Dickens' Great Expectations (1861). Pip begins the novel with an exploitative job selling pseudo-environmental solutions on the phone. She has massive amounts of student debt, a crush on an older married man, and a charismatic Julian Assange-like man's interest in her from his compound in Bolivia. By weaving together chapters that take on different points of view (many of the characters experiencing rising amounts of anxiety for one reason or another), Franzen can explore all kinds of topics--our lack of privacy, the way that fame can poison one's soul even as most everyone wants more attention, a writer who drinks much bourbon and lounges around in his boxers all day in an attempt to write a "big" novel, a missing nuclear warhead in Texas that takes on Dr. Strangelove reverberations as a white trash couple uses it to heighten their lovemaking, and the deadly effects of the Internet (as he writes, "The aim of the Internet and its associated technologies was to 'liberate' humanity from tasks--making things, learning things, remembering things--that had previously given meaning to life and thus had constituted life. Now it seemed as if the only task that meant anything was search-engine optimization" (492).

As much as Franzen finds ways to dissect postmodern American existential angst, I missed the tight structure of the two parents and the three grown children all exemplifying the split between the east coast pretensions and the midwest blandness of The Corrections. Purity still has its moments where Franzen's satirical vision summarizes our landscape. For instance, take this scene in Texas from the point of view of the 50-something journalist named Leila:

"To drive east on Amarillo Boulevard was to pass, in quick succession, the high-security Clements Unit prison complex, the McCaskill meat-processing facility, and the Pantex nuclear-weapons plant, three massive installations more alike than different in their brute utility and sodium-vapor lighting. In the rear-view mirror were the evangelical churches, the Tea Party precincts, the Whataburgers. Ahead, the gas and oil wells, the fracking rigs, the overgrazed ranges, the feedlots, the depleted aquifer. Every facet of Amarillo a testament to a nation of bad-ass firsts; first in prison population, first in meat consumption, first in operational strategic warheads, first in per-capita carbon emissions, first in line for the Rapture. Whether American liberals liked it or not, Amarillo was how the rest of the world saw their country" (173). 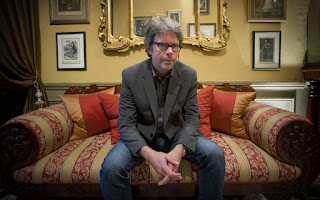 This x-ray vision of our debased culture suits me well (I especially like the sodium-vapor lighting equalizing all three facilities), but for some reason Purity keeps returning to the carping of Annabel who torments her overly sweet husband Tom with her artistic sense of injustice, her rejection of her family's billions of blood money made from meat processing, and her dislike of the world as it is. Perhaps we are meant to see some actual purity in all of Annabel's rejections and in Pip's search for a better way of life free from her parent's psychodramas. Franzen's fiction works best, as it sometimes does in Purity, when he finds a balance between his hyper-critical rage and his more sympathetic examination of our inner lives.
Labels: Jonathan Franzen Purity

Leblanc_phil said…
I'm not sure if you'll be able to access to this content from the US, but the CBC has had a very long discussion with Jonathan Franzen in mid-September on the radio show Writers & Company. His comments on technology and totalitarianism in particular were quite interesting. The whole discussion in fact was quite amazing: http://www.cbc.ca/radio/writersandcompany/jonathan-franzen-on-purity-1.3222688.

Additionally, they also have a game you may enjoy, Who said it? Jonathan Franzen or Disney's Frozen. I have to say even I couldn't quite tell them apart in some instances: http://www.cbc.ca/books/2015/08/who-said-it-jonathan-franzen-or-disneys-frozen.html
October 3, 2015 at 2:55 PM