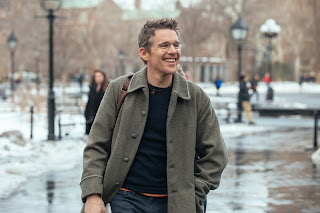 1) After a dull start, Rebecca Miller's Maggie's Plan proved engaging enough with the combined talents of Greta Gerwig and Julianne Moore playing characters competing for the attention of a ficto-critical anthrolopologist named John Harding (Ethan Hawke). The movie develops wry momentum once Maggie (Gerwig) allows their combined interest in his drafting of a novel to become a romance. Once John suddenly kneels down before Maggie (dressed in a nightgown) to proclaim his love for her in a manner that reminded me of Gene Wilder doing something similar in The World's Greatest Lover (1977), I kept finding myself fixating on his deliberately ersatz haircut.

2) Perhaps, by this point, after so many Sunset movies, and the epic time expansion of Boyhood, Hawke could not just simply appear in a decent short haircut. Perhaps such conservatism didn't square with Rebecca Miller's vision of his slightly pretentious intellectual character, but did his hair have to be so misshapen and deliberately badly cut with its chicken comb top and its uneven strands going every which way? Is he supposed to look boyish? In Hamlet 2000 Hawke sported a respectable 90's pageboy cut that he would sometimes cover with a ski cap. In most of his movies, Hawke's do has looked fine, so why does he look like such a dork here?

3) Perhaps I'm just a guy with a guy's limitations watching a movie that patiently explores various ways in which women self-actualize as mothers or academics or lovers. I can see why Greta Gerwig picked the role. She gets to wear lots of prim outfits with knee-length socks as her character wrestles with her tendency to ignore men altogether as she prefers being a mother figure. Julianne Moore plays Georgette, a writer and a leading academic with an exotic Brazilian(?) accent who still harbors a weakness for John (Lord knows why). Maggie finds, after a certain point, that she rather likes Georgette, even though Maggie stole her husband away from her. 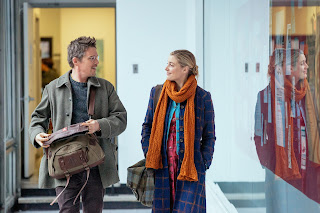 4) So, as Maggie's plan of getting John to reunite with his former wife reaches its many complications, I just kept staring at Hawkes' shag updo and feeling bad for him. At one point, John curses out Maggie for manipulating him, and I could understand. Anyone who has to spend so much time onscreen under that pile of postmodern pick-up sticks/going-every-which-way coiffure really should be annoyed.
Labels: Maggie's Plan