"Not my first rodeo": notes on Terrence Malick's Song to Song trailer 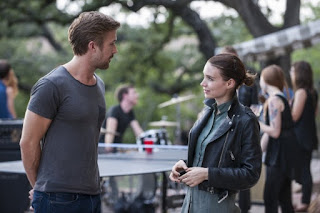 "Not my first rodeo," I thought, when watching the new Terrence Malick trailer for his upcoming movie Song to Song. I've been down this road before. I have forced myself to sit through Malick's recent films. I wasn't born yesterday, and, frankly, I don't buy into the hype about this new one, no matter how much Rooney Mara, Natalie Portman, Michael Fassbender, and Ryan Gosling (not to mention Iggy Pop and John Lydon) romp around in the midst of rock concerts, drive playfully in convertibles, or flirt during parties or whatever. Given what happened with Knight of Cups (2015), I doubt that Song to Song has a script. Instead (I imagine) Malick gave his high level cast a hand-typed sheet of quotes from Horace or Cicero, and then set them loose with his cinematographer/steadicam operator as they tried to make something out of next to nothing--their increasing desperation (Gosling chewing on Mara's foot or whatever) providing the real entertainment. Uh, a love triangle between Rooney, Fassbender, and Gosling perhaps? Malick enjoys watching these stars squirm, and it makes for a pretty, pretty trailer, but we will learn (once again, soon enough) the limits of a movie without a screenplay.

Recently, Ray Pride (of the excellent Movie City News) and I had a little exchange on Twitter on this very topic, a discussion that could foreshadow many a critical disagreement to come about Song to Song. Ray had posted the link to the trailer, and I wrote in reply:

Me: "where one gets to hobnob with screenplay-free movie stars improvising feverishly in pretty locations."

Mr. Pride responded: "I marvel at Knight of Cups and its slipstream of thought/regret made possible only by Malick's wild over-shooting and months upon months of finessing."

Me: "Yes, still, I tend to favor the emperor's clothes view of Malick. Much depends on how much the viewer is willing to buy into his pretension, and I like a good screenplay."

Ray: "And if you look at his earlier pages, you can tell he can write a screenplay. RADEGUND is reportedly the first of his fully-scripted chamber dramas to get produced."

Me: "Yes, but why bother now if he can get a-list stars to strain for effect for him? Why not embody pure spontaneity instead? Knight of Cups ended up being very pretty pretty pretension. Christian Bale was not happy."

Ray: "I wrote up my rationalization for KOC. Another eccentric perspective: those two movies were shot almost back-to-back, what, three years ago? Maybe at his age he’s now interested in making a few more finite productions rather than leaving a mass of sprawl behind."

Me: "I think he's just cashing in on his mystique. Real inspiration vanished back around the days of Badlands."

After that, our conversation ended amicably.

So, perhaps I'm wrong. Perhaps the emperor Malick wears clothes after all, and all will be redeemed when Song to Song opens in New York and Los Angeles on March 17.

But I doubt it.
Labels: Ray Pride Song to Song Terrence Malick

Connie Wilson said…
I have been writing about movies since 1970 (and have one book on 70s films, "It Came from the 70s: From The Godfather to Apocalypse Now." I stood in line here in Austin @ SXSW from 5 minutes to 5 until 6:30 p.m. on Friday, only to learn that 600 people (and me) were being turned away from the too-small Paramount Theater (capacity: 1100). Seems they've sold something like 90,000 badges, and it looked like MANY of that group were lined up, with me, to see Ryan Gosling, Michael Fassbender, et. al. I was a fervent admirer of "Badlands." I liked "The Thin Red Line." I found his Colin Farrell Pocahontas film so so and disliked "Tree of Life" when it wasn't dealing with the family drama. Preliminary report(s) from those who DID get in, told me at a showing of "The Hero" (which was pretty good, with Sam Elliott, Katharine Ross, Nick Offerman and Laura Prepon) was that "Song to Song" is a movie about the Austin movie scene that has no music to represent that but multiple locations, which just confused the audience, so much so that a couple who has been going to this for 4 years now left mid-film. Saw "The Ballad of Lefty Brown" tonight (Bill Pullman). Pretty slow going, but probably a better film than the one I missed. I hate to say it, but it's almost like when Kubrick put out "Eyes Wide Shut" and you just wanted him to go back to doing "Dr. Strangelove" or "Full Metal Jacket." (or something like that.)
March 12, 2017 at 1:56 AM