A sentence from the Library of America's Shake It Up: Great American Writing on Rock and Pop from Elvis to Jay Z 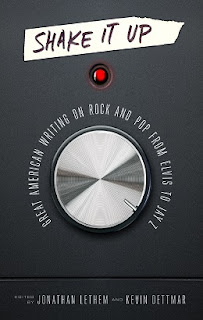 I've been very much enjoying the recently published Shake It Up, edited by Jonathan Lethem and Kevin Dettmar. It provides a jukebox sampling of lively loopy rock, soul, and folk journalism that shifts giddily from Eve Babitz seducing a cheerfully newly thin Jim Morrison in "Jim Morrison is Dead and Living in Hollywood" to the decidedly grim portrait of the up-and-coming band Led Zeppelin slogging across America (in a way that most definitely does not resemble Almost Famous (2000)) eventually traumatizing Ellen Sander in "Inside the Cages of the Zoo," from Lester Bangs not being all that sympathetic when Elvis died to Ed Ward not finding Bruce Springsteen's Born to Run all great after all. The book is full of twists when one might expect more praise--Chuck Eddy not caring much for the later Ramones, for instance. And the style often comes across as pleasantly drug-addled and deranged. I felt that this one sentence by Camden Joy's piece entitled "Total Systems Failure" deserved honorable mention here:

"Then the record companies ran out of Nirvana specialty reissues and Sonic Youth did not make another Daydream Nation and stupid Mark E. Smith assaulted his girlfriend while Elvis Costello forfeited his place in the pantheon and generation-defining classics were on the tips of the Breeders' and Uncle Tupelo's tongues when the band members turned on another as Nick Cave and Morrissey became jokes and Bob Mould and Mike Watt continued on cluelessly and the gifted pop band Christmas came back as the utterly irrelevant smug swingers Combustible Edison and traditionally deserving dues-paying types like Vic Chesnutt and the Fastbacks could not get a commercial purchase on the popular imagination as everybody from the Posies to Pearl Jam to Archers of Loaf never figured out how to make an album entirely important from start to finish, forgetting the point of pop stardom is to bring together huge clumps of otherwise unaffiliated folks, and Pavement couldn't follow up the Pacific Trim EP with the requisite jubilant breakthrough (their Let It Be) and Cat Power and the Mountain Goats defiantly clung to Dylan pre-'65 and Tom Waits was too late with The Black Rider and Yo La Tengo were inexplicably overlooked (how does that begin to happen?) and the fetish for releasing crappy home demos--whose very lack of finish lent them the steady hiss of a gradually disappearing public--succeeded only in stealing mid-decade credibility from keenly perfectionist pop stars like Robyn Hitchcock and Nick Lowe and They Might Be Giants precisely when they issued their masterpieces."
Labels: Library of America Shake It Up