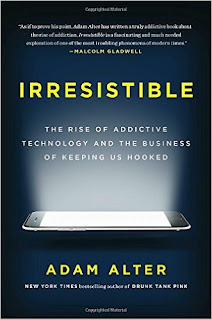 "The environment and circumstance of the digital age are far more conducive to addiction than anything humans have experienced in our history. In the 1960s, we swam through waters with only a few hooks: cigarettes, alcohol, and drugs that were expensive and generally inaccessible. In the 2010s, those same waters are littered with hooks. There’s the Facebook hook. The Instagram hook. The email hook. The online shopping hook. And so on. The list is long—far longer than it’s ever been in human history, and we’re only just learning the power of these hooks.

Compared to the clunky tech of the 1990s and early 2000s, modern tech is efficient and addictive. Hundreds of millions of people share their lives in real time through Instagram posts, and just as quickly those lives are evaluated in the form of comments and likes. Songs that once took an hour to download now arrive in seconds, and the lag that dissuaded people from downloading in the first place has evaporated. Tech offers convenience, speed, and automation, but it also brings large costs. Human behavior is driven in part by a succession of reflexive cost-benefit calculations that determine whether an act will be performed once, twice, a hundred times, or not at all. When the benefits overwhelm the costs, it’s hard not to perform the act over and over again, particularly when it strikes just the right neurological notes.

A like on Facebook and Instagram strikes one of those notes, as does the reward of completing a World of Warcraft mission, or seeing one of your tweets shared by hundreds of Twitter users. The people who create and refine tech, games, and interactive experiences are very good at what they do. They run thousands of tests with millions of users to learn which tweaks work and which ones don’t—which background colors, fonts, and audio tones maximize engagement and minimize frustration. As an experience evolves, it becomes an irresistible, weaponized version of the experience it once was. In 2004, Facebook was fun; in 2016, it’s addictive."  --from Adam Alter's Irresistible (a book that has been preoccupying me recently)
Labels: Adam Alter Irresistible