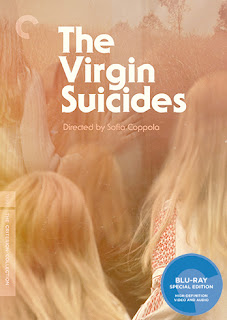 I enjoyed this recollection of Sofia Coppola's in The Guardian via @CriterionDaily:

"What does The Virgin Suicides mean to me now? It makes me remember shooting in Toronto with Kirsten and all the cast. Also, I have fond memories of it just not being a total disaster. I remember my Dad telling me that your movie’s never as good as the dailies – everything shot that day – and never as terrible as the first rough cut. When I saw the first rough cut, I thought: 'Oh no, this is terrible, what have I done? I’ve talked all these people into letting me make a movie and it’s terrible.' Then, little by little, we pieced it together and made it into a film.

I don’t know if I would have a film career if it wasn’t for that book. Turning it into a film really opened me up, gave me the bug. I think I was just wandering in my 20s, trying to figure out what I wanted to do, trying different things and having that angst of not feeling comfortable in your own skin yet. It was scary directing a film, but I was so connected with the material I felt like I had no choice. The Virgin Suicides made me a film-maker."
Labels: Sofia Coppola