Black Panther and the American Military-Industrial Complex: from Adam Serwer's "The Tragedy of Erik Killmonger" 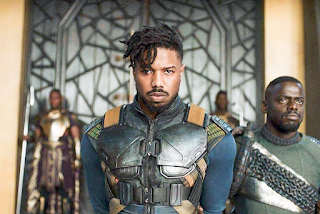 Black Panther left me stunned, impressed, and eager to learn more about Ryan Coogler's aesthetics, politics, and his treatment of key themes like isolationism/integrationism. I plan on writing something more later, but for now I'll quote from Adam Serwer's excellent Atlantic article "The Tragedy of Erik Killmonger" which concerns the central ambivalence the viewer feels about the villain of the movie:

"It is also a mistake, to, as Lebron does, view Killmonger as 'as a receptacle for tropes of inner-city gangsterism.' Killmonger is not a product of the ghetto, so much as he is a product of the American military-industrial complex. Here too, the script is explicit. Noting Killmonger’s technical background (he studied at MIT) and his war record (tours in Iraq and Afghanistan, even in Africa where, he acknowledges, 'I killed my own brothers and sisters on this continent'). The CIA agent Everett Ross says of Killmonger, 'he’s not Wakandan, he’s one of ours,' later observing that Killmonger’s coup is what the U.S. government 'trained him to do.' The part of Killmonger that makes him a supervillain is not the part of him that is African."

Other compelling articles about the movie:

---"Behind the Scenes of Black Panther's AfroFuturism" by Angela Watercutter

---"On Killmonger, the American Villain of Black Panther" by Doreen St. Felix