On The Pleasures of Edward Gorey 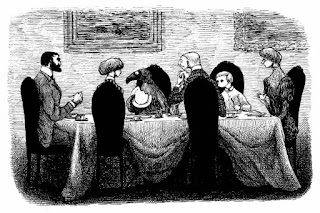 Recently, I've been fixated on Edward Gorey. He has a new biography out by Mark Dery, and I admire Gorey because he was an uncompromising artist who never let others get too much in the way of his production. He somehow knew what to do, even if it was another nonsense book shaped by the alphabet or made up of limericks. By writing and drawing brief books, Gorey did as he pleased until the outside world caught up with him in the 1970s. He never seemed to cater to anyone, and one symptom of that is he often did not read his mail. He seemed to prefer the company of cats to humans. He also didn't seem to mind being as morbid in his work as he pleased. Instead of dwelling much on the present, the Edwardian/Victorian era in an imaginary England suited him creatively, and he knew to not overly explain anything. He saw Henry James as a kind of enemy of over-elucidating everything in his novels.

Gorey, in contrast, is the artist of the oblique and the merely suggested, his aesthetic built on indirection often combined with a very specific image-- a murdered child, a mystery in a Gothic manor, a frustrated artist plagued by his attempt at a novel, another house on fire, a drunkard who suffers from delirium tremens, a series of Surrealist disconnected tableaux, or a sequence of disconnected phrases that suggest some subconscious associations. As Gorey put it, "I admire work that is neither one thing nor the other," as Dery reports. "Explaining something makes it go away. Ideally, if anything were any good, it would be indescribable." Like Mallarme, Gorey is the artist of the hinted, a person who comes across as morbidly afraid of boring the reader. He preferred to keep his work as open to as many interpretations as possible. As he said, "Always be circumspect. Disdain explanation."


In his youth, Gorey wrote a series of Dugway plays, and here's Dery's summary of Gorey's themes already on display: "the melancholy of lost time ("THE SCENE: An antique room, obscurely decaying"); the stealthy tiptoe of our approaching mortality (symbolized for Gorey by crepuscular or autumnal or wintry light); and, of course, angst, ennui, the banal horrors of everyday life, arbitrary and unpredictable turns of events, cruelty to children (a governess kills her charge's pet canary), the cruelty of children (a little girl bashes her big sister's head in with a silver salver), a murder most foul (a woman shoves her friend over the balustrade" (63).

To quote Gorey one last time: "Gorey once observed that 'his mission in life' was 'to make everybody as uneasy as possible, because that's what the world is like.'"
Labels: Edward Gorey Mark Dery