"Take this pink ribbon off my eyes": 5 notes on Captain Marvel 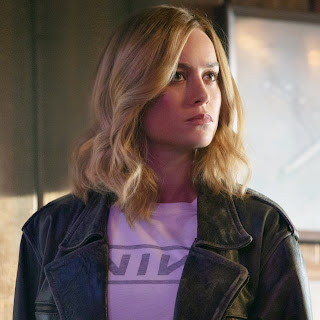 1) Annette Bening's work as the Supreme Intelligence in Captain Marvel was almost enough for me to forgive her for starring in 20th Century Women.

2) It's not hard to root for Brie Larson. Now, two of the stars of Scott Pilgrim vs. the World have large superhero franchises, which only seems fitting.

3) In this short-attention-span-junkfood-saturated-with-media environment we live in where our phones devour hours of our attention each day with addictive devices and apps, one likes to think that the Marvel studio executives know what they are doing by now. But still, I find it ironic that we can take pleasure in watching Brie Larson assume her superpowers partially because Marvel movies have always starred male leads. It's about time that changed. The fact that she's not some hulking muscle-inflated stud grunting out pronouncements of arrogant male privilege can still delight, just as Gal Gadot as Wonder Woman did. Later in the movie, after many actions scenes that often involve fire bolts shooting out of her hands, Carol Danvers/Vers/Captain Marvel still takes a moment to help Nick Fury (a weirdly digitally de-aged Samuel L. Jackson) do the dishes. I don't remember Thanos doing anything like that in Avengers: Infinity War. As a star, Brie Larson remains recognizably human in spite of the corporate carpet-bombing synergistic media campaign swirling around her.

4) I did like the movie, and yet . . . how many unnecessary problems this film has. An early scene involves Vers and various Star Force Kree warriors infiltrating some planet on a secret night mission, and I could hardly tell what was going on as the green lizard shapeshifter people known as the Skrulls guerrilla fight Yon-Rogg (Jude Law) and his gang in the dark purple murk.  Then movie treats us to a clumsy dream/exposition sequence where Vers memory allows her to bop around her past life as she faced various challenges (a go-cart race, an Air Force bootcamp rope to climb, etc). Also, we see her drunkenly singing in a bar, and all of these skittering non-scenes are incoherently accompanied by some Skrull barking in a voiceover. I think that the Skrulls were mining her mind for some secrets concerning the Supreme Intelligence or something, but I can't imagine that green lizard men with large ears will age well.

5) Fortunately, the lighting and the humor improve once Vers crash lands on earth back in the 90s, in a Blockbuster Video store. Once she changes into a Nine Inch Nails t-shirt and jeans, hops on a stolen motorcycle, joins the de-aged Fury, and sets out on her journey to learn just what those mysterious glowing early dreams mean, the movie finds its footing. There's a scene-stealing cat, many jet fights in outer space, No Doubt's "Just a Girl" playing over a slightly better lit later fight scene, and bolts of light-speed engine-worthy photon blast energy erupting out of Captain Marvel's eyes and hair. It's about bloody time.
Labels: Annette Bening Brie Larson Captain Marvel