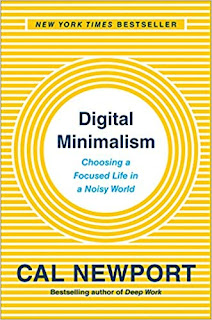 "Eliminating solitude also introduces new negative repercussions that we're only now beginning to understand. A good way to investigate a behavior's effect is to study a population that pushes the behavior to an extreme. When it comes to constant connectivity, these extremes are readily apparent among young people born after 1995--the first group to enter their preteen years with access to smartphones, tablets, and persistent internet interconnectivity. As most parents or educators of this generation will attest, their device use is constant. . . .

My first indication that his hyper-connected generation was suffering came a few years before I started writing this book. I was chatting with the head of mental health services at a well-known university where I had been invited to speak. The administrator told me that she had begun seeing major shifts in student mental health. Until recently, the mental health center on campus has seen the same mix of teenage issues that have been common for decades: homesickness, eating disorders, some depression, and the occasional case of OCD. Then everything changed. Seemingly overnight the number of students seeking mental health counseling massively expanded, and the standard mix of teenage issues was dominated by something that used to be relatively rare: anxiety.

She told me that everyone seemed to suddenly be suffering from anxiety or anxiety-related disorders. When I asked her what she thought caused the change, she answered without hesitation that it probably had something to do with smartphones. . . . She noticed that these new students were constantly and frantically processing and sending messages. It seemed clear that the persistent communication was somehow messing with the students' brain chemistry.

. . . the plight of iGen provides a strong warning about solitude deprivation. When an entire cohort unintentionally eliminated time alone with their thoughts from their lives, their mental health suffered dramatically. On reflection, this makes sense. These teenagers have lost the ability to process and make sense of their emotions, or to reflect on who they are or what really matters, or build strong relationships, or even to just allow their brains to power down their critical social circuits, which are not meant to be used constantly, and to redirect that energy to other important cognitive housekeeping tasks. We shouldn't be surprised when these absences lead to malfunctions."

Newport's book can easily boiled to one urgent lifestyle tip: Get away from your smartphone. The device is much more sinister and addictive that we can fully comprehend at the moment.
Labels: Cal Newport Digital Minimalism