The enduring depth of the charmingly shallow: 4 notes on the pleasures of North by Northwest 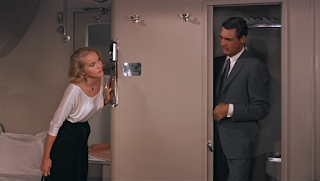 1) In our household, Hitchcock's North by Northwest (1959) has always been held in particularly high esteem, although I prefer to teach Notorious (1946) and Psycho (1960). In terms of film technique, North by Northwest strikes me as comparatively shallow, a knock off variation on The 39 Steps (1935), although one could say shallowness is the point. Family members often quote various scenes, especially Eve Kendall's lines like "Plane travel vs. train travel. Rather innocuous considering he was a fugitive from justice. Who did he kill?" My son, who now teaches filmmaking, describes the movie as a series of set-piece scenes that often humorously lead to satisfying climaxes, with someone getting punched, or drunken humor, or motherly humor mixed with suspense. Given that the plot of the movie tends to want to kill off Thornhill through elaborate means, Roger is equal to the challenge, perhaps in part due to his career in advertising teaches him how to lie and adopt various personae fluidly. Hitchcock seems intent about torturing Cary Grant, as if in a kind of jealous reply to his fame and good looks, (which reminds me of the treatment of Emma Stone in the more recent The Favorite), yet Roger is something of an expert fraud, a man of surfaces in a movie full of allusions to other Hitchcock films, a man happy to become in the moment what the occasion requires, be it a red cap, a murder victim, a killer on the loose, a witness testifying in court, and/or a derelict son to his doubting mother. Is the beginning of Roger's drunken driving scene a reference to the various cliff-edge over water moments in Grant's "Suspicion" (1941)?

2) Among the set-piece scenes, I like the auction one especially in the way Roger subverts a social ritual of the rich in order to attract the police. An auction implicitly asserts the manners of the privileged class as it makes its artful purchases, but Roger undermines the ceremony until a woman says to him, "You're no fake. You're a genuine idiot," to which Cary Grant replies, "Thank you." The scene is not only very funny, it also shows how Roger is happy to play the cog in the fateful apparatus dictated by criminals and the CIA. According to the impossibly smooth Phillip Vandamm (James Mason), Roger will play a corpse next: "You're very next role. You will be quite convincing, I assure you." But Roger keeps finding ways to slide out of the storyline assigned to him. Roger embodies the disruptive element that revolts against the narrative he's in. 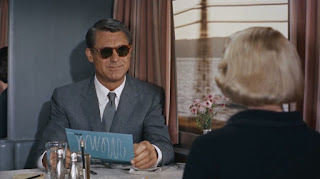 3) Just as the design elements of Psycho sometimes juxtapose the vertical old creepy house with the blandly modern horizontal Bates hotel, so does North by Northwest revel in vertical/horizontal dichotomies. For instance, at the very end of the movie, the scene switches from the cliffhanger conclusion on the cliff faces (ha!) of Mount Rushmore to the speedy horizontal of a train ride, where (again) Roger pulls Eve up to the upper bunk as a kind of nostalgic return to the interior decorations of their escape from the police earlier. So, the vertical and the horizontal keep switching off and accumulating on each other, even amidst the lewd joke of the final shot. The movie begins with the Saul Bass credit sequence's vibrant vertical lines of a skyscraper iconographically preparing us to upcoming heights of the United Nations building, the various floors of several luxury hotels, and, of course the attack of a crop dusting plane as it swoops down to try to assassinate Roger from above.

4) When I wrote earlier that the movie is shallow, it is also full of absences, given that the main earlier  McGuffin of George Caplan doesn't exist at all, as much as Vandamm's men look for him, as much as Roger stumbles into embodying him. The end of the movie keeps returning to the blanks in what Roger calls "that same silly gun of" Eve's. Why is there so much emphasis on fake bullets? Are they supposed to be like little George Caplans, creating lots of effects, but not really existing? Are we meant to associate Roger's fake killing at the hands of Eve with the actual assassination of Lincoln whose visage looks out upon Mount Rushmore? As Vandamm says in his last line, "That's not very sporting, using real bullets."
Labels: North by Northwest. Alfred Hitchcock