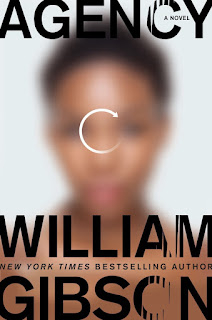 ---"How AI Will Turn Us All Into Filmmakers" by Clive Thompson

---"No Treatment Protocol": Steven Soderbergh's Contagion and The Die-off Scenario"

---"Along with trust, a sense of individual agency – heroic centrality in your own story, the ability to make and carry out choices of your own, the “capacity to act” – is the central offer of most Hollywood dreams, and the product sold to us by the majority of corporate ads; but it’s the least likely attribute most of us will ever possess. Like it or not – know it or not – we tend to do what nudge and soft power would prefer. From his beginnings in 1984’s Neuromancer, Gibson has offered the struggle for agency as an unacknowledged, quietly devastating war – fought by hackers, gig economy workers, off-gridders and their networks – against the algorithm, against the manipulation of our needs, our personal information and our appetites, by big data and gangster capital. If he was “prescient” back then, he’s right on the ball now, when it’s so much harder to believe in those loose human associations he imagined in the 1990s, whose combination of technical nous and cultural know-how enabled them to quickly distinguish the real from the sucker fantasy."  --from M. John Harrison's review of William Gibson's Agency

---"They made a movie out of it" by James Pogue

---"The Pleasures of Pauline Kael" by Farran Smith Nehme

---"But if this decade’s start represented one extreme of the celebrity power pendulum, then 2020 marks a return swing: The stars haven’t been this powerful, with this much leverage, since the 1950s, when they first broke free from their studio system contracts, or the 1980s and ’90s, when the rise of the power publicist and agent granted them unprecedented leverage. In short, no could ever make that documentary, with that argument, today.

But the celebrities didn’t vanquish the paparazzi so much as figure out how to undercut them — and the publications they fueled. In the end, the solution was so straightforward. Celebrities simply became their own paparazzi, posting all manner of details and footage of their daily lives on social media, and effectively put real paparazzi out of business."  --from Anne Helen Petersen's "How the 2010s Killed the Celebrity Gossip Machine"

---"In essence, in the last decade or so, corporations have co-opted the most palatable transformative fandom and monetized it."  --from Katherine Trendacosta's "The Decade Fandom Went Corporate"
Labels: Notable film and media links