In Robert Zemeckis’ Back to the Future (1985), one of the more iconic moments of the movie takes place about an hour into it when both Marty McFly (Michael J. Fox) and Doctor Brown (Christopher Lloyd) figure out how to “harness” the power of lightning to send Marty “back to the future.” Doc Brown says these last thrilling words in his living room one evening as he suddenly points directly at the camera, as if the audience in the movie are looking on from the future itself (as in a sense they are). As Marty and Doc takes turns moving towards the camera in the scene, the focus shifts from close up (as in the still above) to further back to the fireplace where four framed pictures of famous men, mostly scientists, line the mantlepiece--moving from left to right--Isaac Newton, Ben Franklin, Thomas Edison, and Albert Einstein. Otherwise, the room consists of a roaring fire and the kinds of lamps, doodads, and furniture that one might expect from a prosperous bachelor scientist living in a small town in California in 1955. By analyzing this set design, the pictures on the mantlepiece, the costumes, the low key lighting, the shot composition, and the positions of the two actors, I will explore how cinematographer Dean Cundey and director Robert Zemeckis chose to illustrate a discovery by placing them within various scientific and visual traditions during this key moment of realization in Back to the Future.
On the one hand, Doc Brown is a comically exaggerated variation on the mad scientist with his bugged out eyes and wild hair, a figure that one can first find in the movie Frankenstein (1931), but one could even go back to Fritz Lang’s Metropolis (1927) for a similarly crazed inventor. Doc’s an important figure in the movie who remains a close friend of Marty--a major point of continuity between 1985 and 1955--and here he wears a silver robe that resembles a smoking jacket, a white tie, a pink shirt, and two wrist watches to further emphasize the theme of time. Doc also still has the cut on his head from an accident in the bathroom that led to his original Eureka! moment described but never seen in the movie when he figures out the idea behind the “flux capacitor,” the machine that allows time travel to take place in the iconic DeLorean car. In this particular moment, Doc’s head positions itself in a slight overlap between Einstein on the mantlepiece (who also tended to have wild hair), and the picture of Tom Edison, that Doc was just talking to earlier in the scene, emphasizing how all four men are mentors for him. Doc’s dramatic pose breaks the frame of the shot as he stares at the viewer without acknowledging what he’s doing. He’s too caught up in the moment of scientific discovery. It is as if, subconsciously, Doc wants the viewer to share in this Eureka moment by making us the future. By loosely breaking frame at this moment, Doc’s position emphasizes a radical shift away from the usual positioning within a scene.

Meanwhile, Marty McFly stands behind him, looking to the right, in his Levi’s jeans (I’m guessing), a two-tone jean jacket, a flannel grey plaid shirt, and his slightly greased 1980s style hair. Marty’s about the change into a much more fifties-ish pair of khaki pants and a red sweater as they go investigate the situation at the Hill Valley high school with Marty’s mother, Biff, and George McFly in their younger manifestations. For now, Marty still conveys a more informal and hip 80s look given the new wave button on his jacket. In the course of the scene, he moves in and out of focus as he walks back and forth from the chair by the fireplace to a closer position by the camera, but at the moment, he’s temporarily out of focus to give Doc his big moment.

The composition of the image has several vertical elements juxtaposed. Next to the two actors standing in the middle, two greenish Tiffany lamps frame the mantlepiece while several other colorful vintage lamps have much fringe on the left side of the still while a red chair, the mantlepiece, and a frame for the fireplace provide the horizontal elements of this low key shot. The left side of Doc’s face is clearly the dominant since it is mostly lit from the left side while the right is in shadow as if from all of those lamps on the left. The scene is firelit with much indirect lighting, giving the moment a warm, homey, old fashioned, comfortable feel with the suggestion of mahogany and Victorian ease, with the green and red pleasantly balanced with one another. The subsidiary contrasts are Doc’s tie, the colorful lamps, Marty’s face, and the pictures of the great men ranged behind him.

Those four pictures all provide a mute commentary that reflect Doc’s heroes, his mentors, and the range of his influences. Isaac Newton figured out many of the major theories about space, time, and motion that are still valid today, and his notions about absolute time would be adjusted by Einstein’s theory of relativity--a relationship between the two men that justifies their positions on the opposite extremes on the mantlepiece. Ben Franklin was both an inventor and a scientist, and Doc and Marty will replicate to some degree Franklin’s discovery of electricity from a kite when they catch lightning from the clock tower to help jump start Marty’s return to 1985. As in the case of Newton and Einstein, Tom Edison, the inventor, shares a relationship with Ben Franklin given the way he took electricity and used it to invent the lightbulb, the telephone, and other machines. Albert Einstein’s discovery of the theory of relativity allows for the complicated interrelation between time and matter that could conceivably lead to time travel. Einstein’s scientific discoveries have elements where time speeds up or slow down depending on one’s travels. The freakish ambiguity of his theories prepares the viewer for Doc’s discoveries in the movie. The science of Back to the Future may lean towards the cartoonish at times, but this scene puts Doc and Marty firmly in the traditions that could produce a time machine. 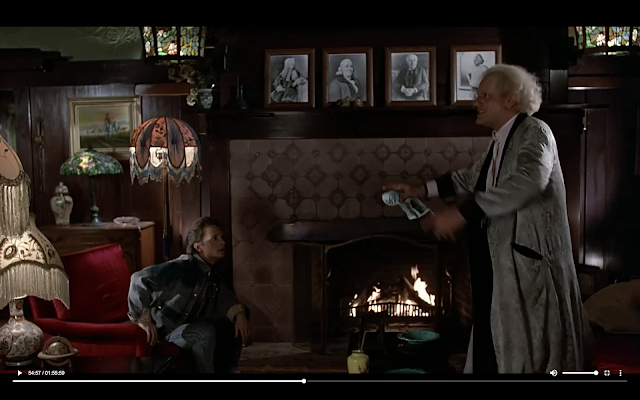 From the still from just a few seconds before the previous one, the fireplace dominates the scene much more, making one realize how much Doc Brown blots out the fire when he has his Eureka moment, as if the flames provided a kind of visual fuel for his discovery. Here, Marty sits in an expectant position in the red chair, subservient to Doc’s ravings and realizations, with both of their faces in profile. The lighting at this moment comes from both the right and left while their faces are in shadow, but the four influential men are clearly in focus along with most everything else in the back end of the living room. Doc holds in his hand the flyer about saving the clock tower that Marty accidentally brought from the future. With that flyer, the filmmakers again used an image to help convey an idea that leads to a discovery.

So, why did Zemeckis and Cundey decide to place this discovery here, in this unexpectedly chummy fireside location? At this point, Doc has seen his future time travelling invention, the DeLorean car, and stored it in his garage. He also watched his future self on the videotape thanks to Marty, so he has every reason to feel good about his future achievements. The living room provides a logical place for the four influential scientists and inventors to line the mantlepiece like a kind of shrine. One could associate fire with one of the first and most important inventions of man that provides our species with an ability to dominate our environment, let alone keep ourselves warm. The fireside atmosphere also conveys a Masterpiece Theater-like visual tradition that runs parallel to the scientific one, a place where Sherlock Holmes could discover a new method for solving crime, or Victorians could read a book in domestic warmth. The glowing scene provides a kind of reassurance that Marty will get a way to return to the future, if only because Doc’s point towards the audience matches his flying car rushing directly at the camera in the film’s final shot.
Labels: Back to the Future Michael J. Fox Robert Zemeckis