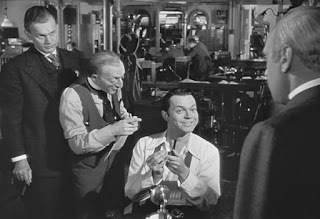 1) Given its "classic" status, it is easy to forget that Orson Welles' Citizen Kane (1941) was made in a spirit of savage mockery of yellow journalism newspaper magnate William Randolph Hearst, a man whose media empire allowed him to guide mass public opinion as he pleased, even to the point of trying his durndest to destroy Citizen Kane. Who could we compare Kane to nowadays? A man who builds his career around lies? A man who, when he loses an election, turns to the headline "Fraud at polls!" to save face? Instead of maintaining that big lie, as some might have done recently, Kane turns his attention to propagandistically supporting the career of his wife, Susan Alexander (Dorothy Comingore) as an opera star even though she can't sing.

2) The movie's spirit of vicious satire I believe gets lost in our latter-day impulse to bend the knee before this august cinematic achievement with movies like Mank (2020), a kind of retelling of the writing of the movie from Herman J. Mankiewicz's point of view, Welles' collaborator on the screenplay. But Herman's alcoholic perspective is something of a drag compared to the up-and-coming wunderkind Welles with his fun with having a final cut and a movie studio (RKO Radio Pictures) to play with like some gigantic train set.

3) Also, 26 year old Orson's charisma also complicates our responses to the film. How are we supposed to feel about the young millionaire as he "thinks it would be fun to run a newspaper," doing anything he "can think of" to get attention even as our local newspapers are replaced with the lying posts of social media and the stalwart branded articles of The New York Times (which I read every day). How much should we consider Kane's innovations of The New York Daily Inquirer as a forerunner of the Fox News Network and the 24 hour news cycle? Is part of our problem the fact that Kane is insufficiently hateful even as the newsreel points out that he "was hated by many more"? Do we view the song and dance "Charlie Kane" scene through the "Me Too" lens given his stolen kiss of one of the showgirls, or do we enjoy Welles' pleasure in sending up the musical convention with a bit of semi-inept soft shoe dancing even as Jedediah (Joseph Cotton) satirically blows smoke on Kane's reflection in the window? Kane gets his comeuppance from both of his wives, but the movie takes its tragic turns uneasily, since Welles was clearly having so much fun learning how to make a film.

4) When teaching this film, I like to focus on parsing out the brilliance of the early scene with Kane's mother (Agnes Moorehead) as the reverse dollying camera has to make its way past a table that has to break in half to accommodate Mrs. Kane and Walter Thatcher (George Colouris) so they can sit down to sign away young Charles to a bank. I love the swish pan transitions as Kane and Emily Monroe's marriage rapidly sours in a viciously quick montage with silver mise en scene emphasizing Emily's increasingly cold responses to his domineering lies. And the opera scenes with Susan Alexander's humiliation just get more ghastly every time I watch them, even as Kane tries his best to keep the lies going by clapping away after her performances.

5) At any rate, Citizen Kane is a classic in the way it exposes Kane's lies for what they are--the increasingly pitiful machinations of a man that the world learns to ignore successfully. That's a happy ending I can fully support, even as I appreciate the jigsaw puzzle complexity of the movie's Modernist portrait of Charles Foster Kane.