From Mark Seal's “'Marlon Was as Dead as Could Be': How Brando Beat the Odds and Became the Godfather" 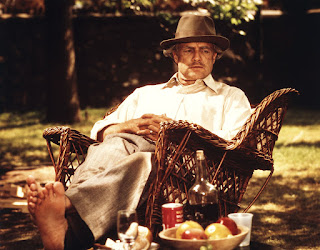 --via Vanity Fair, a sample of Mark Seal's upcoming book Leave the Gun, Take the Cannoli: The Epic Story of the Making of The Godfather:
"Brando told Coppola not to record his voice, because he hadn’t settled on the don’s speech pattern. The director nodded to Narita to begin rolling, and Marlon Brando, supposedly washed up and finished as an actor, began to turn forty-seven years of preparation, experience, and talent into art. 'Slightly, from a low angle, I filmed him holding a glass of wine in one hand and a cigar in the other, going through animated gestures,' said Narita. 'Francis was videotaping at the same time. At one point Brando dipped the end of the cigar into the wine. The phone rang unexpectedly. Brando calmly picked it up, staying in character, and mumbled a few words as if talking to someone on the other end of the line. Then he hung up and continued his pantomime.'

Coppola felt the moment was right to spring his surprise. 'Without warning, I ushered in my barber friend, who went up to Brando and launched right into his speech,' he told Playboy in 1975. 'Brando didn’t know what was going on for a moment, but he listened and then just started doing the scene. It was my shot. The thing worked. I had it down on tape. I’d watched forty-seven-year-old Marlon Brando turn into this aging Mafia chief. It was fantastic.'"
Labels: Francis Ford Coppola Mark Seal Marlon Brando The Godfather