Slapping the corpse: For Colored Girls and the polarized critics 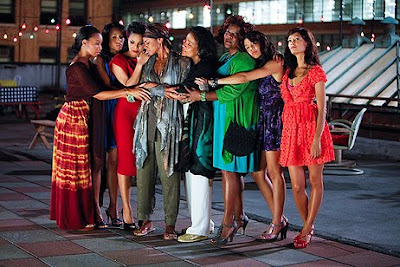 After seeing Tyler Perry's For Colored Girls, I was both intrigued by the ambitious intensity of the film and appalled by its ramped-up man-hating histrionics. While the film's extremity ultimately got tiresome for me (Perry is the Nigel Tufnel of directors, always keeping his melodrama cranked to 11), I still found the ideological, gendered, and cultural divide on display amongst its critics fascinating. While a friend wondered why I would go see the film, tickets for For Colored Girls sold out for two days at our local cineplex, and the librarian proclaimed Shange's "Choreopoem" the best book when I checked it out from the public library. Ntosake Shange constructed her original play out of a multitude of voices, so I thought I'd do the same here with critical reactions:
---"[For Colored Girls] is a film destined to polarize. Many will hate it. Hopefully more will love it, or at least allow room for it, for its raw brutality, its extremes, its difficult truths." ---Betsy Sharkey
---"The film is based on Ntozake Shange’s electric play, the self-described choreopoem “For Colored Girls Who Have Considered Suicide/When the Rainbow Is Enuf.” Inspired by “our mothers,” including Isis, Zora Neale Hurston, Anna May Wong and Calamity Jane, the work, first staged in 1974 as a work in progress and performed ever since, including on Broadway. It is a classic of its unapologetic feminist era, consisting of some 20 poems accompanied by choreographed movement and music, including a blast of Martha and the Vandellas. The characters are seven chromatically differentiated women (brown, yellow, purple, red, green, blue and orange) from points across the country, who recite “dark phrases of womanhood” (the first words in the play) involving infanticide, incest and other horrors. (Mr. Perry adds two more women.) 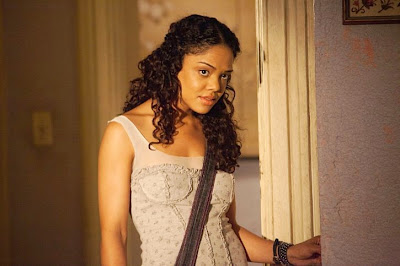 That might sound unbearable, but done right it’s thrilling — specific in its pain, universal in its reach — and Mr. Perry works very hard and gets it mostly right." ---Manohla Dargis
---"Indeed, the stories Shange tells in the play are socially relevant enough for a showman like Tyler Perry to want to capitalize on them for a contemporary black audience. But Perry's commercial impulses have little to do with Shange's radicalism (she refers to her writing as `cultural aggression'). How likely are we to feel for lady in red and her losses when we're busy watching Janet Jackson struggle to act from behind her perfectly applied lip gloss?" ---from Hilton Als' "Color Vision" 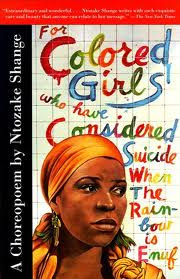 ---"Perry's version is set largely in a rundown Harlem apartment building. In one unit is Tangie (Thandie Newton), a bartender and freelance whore whose little sister, Nyla (Tessa Thompson), is starting to follow in her wanton footsteps. Across the hall lives Crystal (Kimberly Elise), whose alcoholic veteran boyfriend, Beau (Michael Ealy), beats on her and their two young children. Kelly (Kerry Washington) is a social worker who checks on Crystal's kids. Crystal works as an assistant for Jo (Janet Jackson), a mega-rich fashion-magazine editor with nothing but disdain for poor people. Juanita (Loretta Devine) is a nurse who runs a non-profit organization helping inner-city women. Tangie and Nyla's mother, Alice (Whoopi Goldberg), is a hellfire-and-brimstone religious fanatic. Yasmine (Anika Noni Rose) teaches dance to Nyla and other teenage girls. Gilda (Phylicia Rashad) manages the apartment building and tries to keep an eye on her tenants. . . .
The mortar that Perry has used to assemble the bricks of Shange's play is the cheapest, crappiest material available. The plot points that fill in the details are standard Lifetime Movie Channel fare: secretly gay husbands, nice guys who turn out to be rapists, infertility caused by STDs, back-alley abortions administered by a chain-smoking crone who sterilizes her instruments in bourbon, etc. Sometimes this banality can be saved by the matriarchal strength of Phylicia Rashad, or by Kimberly Elise's unadorned sincerity. Usually, though, it's just laughably trite. And I do mean laughably. When a rape victim sees her attacker dead in a morgue and her response is to slap his dead face as if challenging him to a duel, what reaction other than laughter can we possibly be expected to have?"
---from Eric D. Snider's review "All the Trite Cliches of the Rainbow" 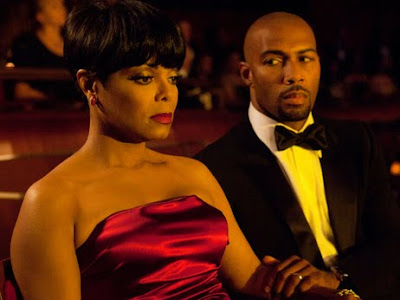 ---"Tyler Perry is no stranger to kitchen-sink melodrama. But “For Colored Girls’’ is the kitchen sink, the washing machine, the curling iron, the sofa, and the ironing board. It’s Oscar, Emmy, Grammy, Tony, and Razzie. It’s astounding. It’s terrible. It’s astounding. Then terrible again. It’s too much — too much screaming, too much crying, too much preaching, too much reaching, too much healing, too much feeling, and, by the time a man dangles two small black children from an apartment window, it’s too much too-much. The audience I saw it with didn’t seem to know whether to clap when it was over or start taking Lipitor." ---Wesley Morris
---"The last thing I wanted (or needed) to see was another film that painted the black man as society's stammering uber-demon, who comes to steal, kill and destroy; or another project that portrays black men as this nation's perpetual delinquents — jobless, thoughtless sexual misfits who can't stop screwing long enough to pick our heads up and realize how we're letting down our women, our children and families, our God and our America.Hide your kids, hide your wife, and hide your husbands, too ... (you know the rest).Quite frankly, it's a narrative I've had enough of, thank you very much.In For Colored Girls, yes, there is a disproportionate number of troubled black men. There is one redemptive male character who isn’t a killer, a rapist, or a liar." ---from Lee Hill's "Finding a Place for Colored Boys"
---"American feminism has changed a lot since 1975, and takes a less monolithic attitude toward male sexism and female suffering, conceding that while men can be oppressors and women oppressed, women do, after all, have free will; they can (and should) take responsibility for their pain as well as their pleasure. and exert control over both. These are more complex attitudes than Perry's broad-brushstroke filmmaking might seem capable of articulating. Articulate them he does -- not that critics notice or care. In their eyes he'll always be an interloper, and he'll never get credit for being anything but a vulgarian bumpkin who made a fortune pandering to black churchgoers and kissing Oprah Winfrey's ring.
I've barely touched on what I like best about Perry: the fact that, in film after film, he gathers together some of the greatest African-American actresses in America -- actresses who are lucky to get one or two scenes in a film with a predominantly white cast -- in leading roles that let them chase dreams, make mistakes, fall in love, have their hearts broken, flirt, seduce, manipulate, preen, pout, rail against injustice, and endure and transcend Old Testament-level suffering. And they reward Perry with performances so heartfelt, and often so accomplished, that they make all of his films worth seeing no matter what you think of him as a director." ---Matt Zoller Seitz 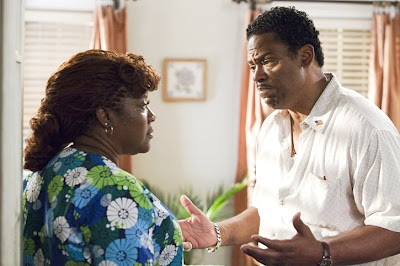 ---lastly, Loretta Devine's thoughts (who stole the movie for me):
That said, the movie critics who will help shape that legacy are predominantly white men who’ve always had it out for Tyler Perry. Isn’t that a disadvantage in the immediate term?
"You know. White men run everything. Don’t start me up. [Laughs] There are people who love it. There are people who think it’s not necessary. There are going to be black men who say, “I don’t want to hear this any more.” But this is a drama, you know? This is a piece of entertainment for people to go into and come out of and have things to talk about and reflect on their own lives and say, “Oh, God, that was me in my 20s,” or, “That was a problem my girlfriend had.” Because the movie resolves itself, and it teaches you that you have to find that thing inside you — and you have to love yourself spiritually. That’s the last thing that the film tells and teaches every woman: No matter what has happened to you, you have to go inside and love yourself. We’re in a country that still embraces all kinds of cultures, and there’s racism across the board for everybody. The people who run this country are primarily white men. So what you gonna do?"
Labels: For Colored Girls

Clarabela said…
Interesting opinions of the movie For Colored Girls. People may not like Tyler Perry or his movies, but at least he had the money and the courage to take on this this movie.

Not matter what you think of the material, these women gave such incredible performances, I will be shocked it at least 1 or 2 of them are not recognized at Oscar time.
November 7, 2010 at 7:09 PM

The Film Doctor said…
Thanks for your thoughts, Clarabela.

I agree that the actresses gave incredible performances. I'm still wondering, though, why Perry decided to have Janet Jackson play a Miranda Priestley-like character? Does he like The Devil Wears Prada? Jo only gets to wield her power in the opening scene, and then, later her philandering husband puts her in the same boat as many of the other women. The Priestley idea just seems thrown in for upper class contrast.
November 8, 2010 at 11:37 AM