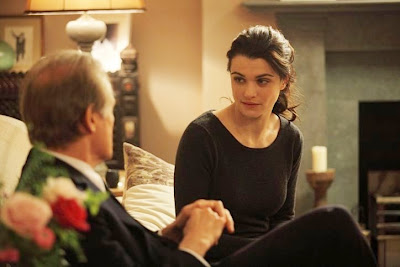 ---Film Students Getting Punched
---God's eye view
---Naomi Klein's The Shock Doctrine
---13 movie poster trends
---Book: A Futurist's Manifesto:
"In a digital realm, true content solutions are increasingly built with open APIs, something containers are pretty bad at. APIs—application programming interfaces—provide users with a roadmap that lets them customize their content consumption.The physical forms of books, magazines, and newspapers have user interfaces that predate APIs. We’ve all figured out how to access the information contained in these physical products. But, the physical form itself does not always make for a good user interface, something that Craigslist, the Huffington Post, Cookstr, and others have capitalized on.
Open up your API, I contend, or someone else will.Many current audiences (and all future ones) live in an open and accessible environment. They expect to be able to look under the hood, mix and match chunks of content, and create, seamlessly, something of their own. Failure to meet those needs will result in obscurity, at best."
---"Make a movie every week. Write every night." Filmmaking advice from Tarantino and Raimi
---how headlines are created
---Radical America
---Limbo VFX reel
---"a single burned DVD is effectively a civilization starter kit"
---"bicycles for the mind"--Silberman explores Steve Jobs' relationship to Zen:
"As a young seeker in the ’70s, Jobs didn’t just dabble in Zen, appropriating its elliptical aesthetic as a kind of exotic cologne. He turns out to have been a serious, diligent practitioner who undertook lengthy meditation retreats at Tassajara — the first Zen monastery in America, located at the end of a twisting dirt road in the mountains above Carmel — spending weeks on end “facing the wall,” as Zen students say, to observe the activity of his own mind.Why would a former phone phreak who perseverated over the design of motherboards be interested in doing that? Using the mind to watch the mind, and ultimately to change how the mind works, is known in cognitive psychology as metacognition. Beneath the poetic cultural trappings of Buddhism, what intensive meditation offers to long-term practitioners is a kind of metacognitive hack of the human operating system (a metaphor that probably crossed Jobs’ mind at some point.) Sitting zazen offered Jobs a practical technique for upgrading the motherboard in his head.The classic Buddhist image of this hack is that thoughts are like clouds passing through a spacious blue sky. All your life, you’ve been convinced that this succession of clouds comprises a stable, enduring identity — a “self.” But Buddhists believe this self this is an illusion that causes unnecessary suffering as you inevitably face change, loss, disease, old age, and death. One aim of practice is to reveal the gaps or discontinuities — the glimpses of blue sky — between the thoughts, so you’re not so taken in by the illusion, but instead learn to identify with the panoramic awareness in which the clouds arise and disappear."
---Lezard's short history of Cahiers du Cinema
---stop-motion Tintin
---Liang's "Camera Movement in Max Ophul's films" (thanks to @filmstudiesff)
---Joseph Mitchell's "Up in the Old Hotel" 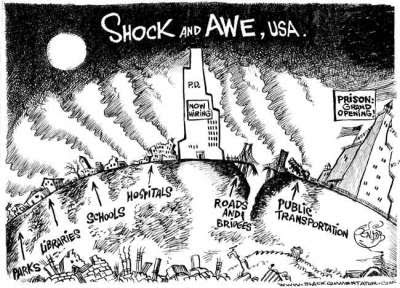 ---the draconian effects of the Stop Online Piracy Act
---the secrets of the McRib that involves heart, tripe, tongue, scalded stomachs
---"Freeing themselves from the constraining expectations of naturalism, those moments embody the culturally confrontational fact that compared with all other art forms, musicals have the greatest vocabulary for sustained joy."
---"The global economy will remain a horrific disaster for another decade and we’re facing worldwide environmental catastrophe, so we must never, ever cut funding for the Army. Got it."
---Saul Bass: A Life in Film and Design
---a letter from Madonna
---Page Eight trailer
---Ingram considers the implications of digital ownership
---the hunt for Blue Velvet's lost footage
---lastly, Eddie Murphy's career arc
Labels: Naomi Klein Notable film and media links The Shock Doctrine

SPEEDbit said…
It really is amazing to read all the info on your blog. The stuff about Steve Jobs..It really tells the story of a great mind and how in his instance it developed..Great post. Keep Blogging!
November 7, 2011 at 4:22 PM