"You must pay for everything in this world one way or another": notes on genre and justice in True Grit 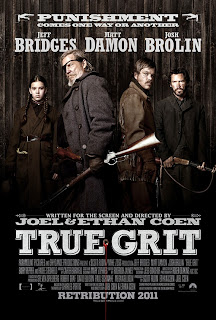 I'm about to attempt to teach True Grit, so some blog posts concerning my evolving thoughts on both the Charles Portis novel and the Coen brothers' movie version seem in order. While I very much admire the novel, the more recent and highly respectful 2010 movie version does take some odd liberties with the storyline. (Why does LaBoeuf have to bite his tongue?) Some opening notes:

1) How does one compartmentalize the novel?  In his essay "Charles Portis: Study of a Cult Novelist," Joseph Parry finds that "Academics may have overlooked him [Portis] because of the regional humor in his novels and the difficulties in classifying his work into a neat genre." True Grit is mostly both a semi-parodic western adventure and a coming of age story.  At times, when Mattie praises her pony Mattie, the novel can resemble some sort of young adult variation on Black Beauty.

2) How does True Grit reflect the political turbulence of the period in which it was written (1968)? At one point in the novel, LaBoeuf confronts Rooster over his involvement in William Clarke Quantrill's bloody border gang during the Civil War.  As he says, "I heard they murdered women and children at Lawrence, Kansas.  . . .  Do you deny they shot down soldiers and civilians alike and burned the town" (158)?  Did Portis mean for the reader to make a connection between Rooster's shady background and war-time atrocities committed by American soldiers in Vietnam? (The My Lai massacre took place during the same year that the novel was published.)

3) What should one think about Mattie's Old Testament sense of judgment?  The entire plot of True Grit is driven by her Hamlet-like determination to avenge her father's murder.  As she says early on, "I would not rest easy until that Louisiana cur [Tom Chaney] was roasting and screaming in hell" (24)!  Later, when she chances upon some prisoners in transport, she claims that "They had ridden the `hoot-owl trail' and tasted the fruits of evil and now justice had caught up with them in demand payment.  You must pay for everything in this world one way or another.  There is nothing free except the Grace of God.  You cannot earn that or deserve it" (40).  In my 2010 post concerning the Coen brothers' previous film A Single Man, I explored how "how, even given the unknowability of fate, judgment can still be swift and deadly" in that movie. Does the Old Testament sense of morality in True Grit provide some tentative answers to the metaphysical ambiguities of A Single Man?  The Presbyterian doctrine of Election has something to do with Mattie's convictions.  In his editorial "Narrative and the  Grace of God: The New True Grit," Stanley Fish debates the question: 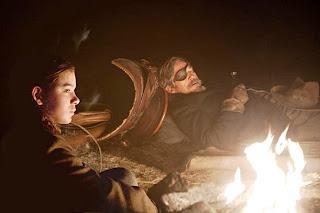 "The words the book and films share are these: `You must pay for everything in this world one way and another. There is nothing free with the exception of God’s grace.' These two sentences suggest a world in which everything comes around, if not sooner then later. The accounting is strict; nothing is free, except the grace of God. But free can bear two readings — distributed freely, just come and pick it up; or distributed in a way that exhibits no discernible pattern. In one reading grace is given to anyone and everyone; in the other it is given only to those whom God chooses for reasons that remain mysterious.

A third sentence, left out of the film but implied by its dramaturgy, tells us that the latter reading is the right one: `You cannot earn that [grace] or deserve it.' In short, there is no relationship between the bestowing or withholding of grace and the actions of those to whom it is either accorded or denied. You can’t add up a person’s deeds — so many good one and so many bad ones — and on the basis of the column totals put him on the grace-receiving side (you can’t earn it); and you can’t reason from what happens to someone to how he stands in God’s eyes (you can’t deserve it).

What this means is that there are two registers of existence: the worldly one in which rewards and punishment are meted out on the basis of what people visibly do; and another one, inaccessible to mortal vision, in which damnation and/or salvation are distributed, as far as we can see, randomly and even capriciously. It is, says Mattie in a reflection that does not make it into either movie, a `hard doctrine running contrary to the earthly ideals of fair play' (that’s putting it mildly), and she glosses that hard doctrine — heavenly favor does not depend on anything we do — with a reference to II Timothy 1:9, which celebrates the power of the God 'Who hath saved us, and called us with an holy calling, not according to our works, but according to his own purpose and grace, which was given us in Christ Jesus before the world began.'" 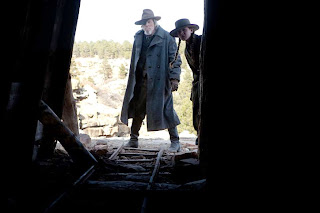 4) Fish concludes with an appreciation for the Coen brothers' metaphysical sensibility: "The new “True Grit” is that rare thing — a truly religious movie. In the John Wayne version religiosity is just an occasional flourish not to be taken seriously. In this movie it is everything, not despite but because of its refusal to resolve or soften the dilemmas the narrative delivers up."  One can claim, then, that Mattie's Presbyterian convictions supply one answer to the questions about the seeming arbitrariness of the film's and the novel's vision of justice.

I'll write more notes on Mattie's voice, her negotiating skills, the novel's use of the "innocent eye," and the differences between the novel and the Coen brothers' movie presently.
Labels: True Grit

Anonymous said…
The Coen Bros. built "Barton Fink" entirely around the narrative structure of the Book of Daniel in the Old Testament, equating the lot of the progressive screenwriter in 1930s-40s Hollywood with that of the elite Jewish slaves in Babylon.

In fact, the entirety of their ouvre is more or less a compendium of old testament-style justice through the prism of dark comedy.
February 7, 2012 at 6:47 PM

The Film Doctor said…
Thanks, Anonymous. I never made that connection. Even for Raising Arizona?
February 7, 2012 at 6:54 PM

Anonymous said…
Oh sure. Hi stole Nathan Arizona's son. He must pay. A dark force of nature (that is out of the control of the Earthly authorities) is sent to destroy him. His life is destroyed, and he is chased even as he continues his wickedness (robbing banks).

His salvation is a fickle whim (a grenade pin), and nothing that is really deserved. He learns a lesson and becomes a law-abiding family man. Note that his two fellow robbers, upon seeing the random power of divine/evil justice, also renounce their ways and crawl through the mud to go back to jail (the Coens share the guilty/redemption dynamic with Dostoyevsky).

Also, you mentioned "A Serious Man". How fickle are the evils that plague the main character, really? Did he covet his neighbor's wife? Did he allow his eldest son to worship an idol (TV)? Did he lie/cheat/steal (the academic bribe)?

The Film Doctor said…
Anonymous, your theories are compelling, but the conclusion (especially the way the two convicts return to jail) struck me as a bit convenient, even as Raising Arizona is still my favorite Coen brothers movie. Are we supposed to think of Leonard Smalls as an agent of justice? Is there Old Testament retribution in The Big Lebowski? All of this thinking makes my head hurt.

I've been studying the novel True Grit, and I'm beginning to wonder if all of Portis' novels are one long elaborate skillfully written shaggy dog joke. His books seem to mock anyone who attempts to analyze them.
February 8, 2012 at 8:03 PM

Anonymous said…
I am sure one could come up with a hierarchy of punishment/come-uppance in Coen Bros. films. The only truly bad guy who seems to get away is Chighur, and in that the Coens were just being true to the novel (although he is massively injured and sneaking away on foot at the end).

Even in Miller's Crossing, where everyone is a bad guy more or less, the two "best" bad guys get the ultimate punishment in a buddy picture - the lose their friendship.

Old Testament justice is often not what we would consider "fair" in modern terms. The book of Job is not the only time when God imposes conditions on humans that beggar one's sense of fair play.

Lebowski may fall into the Coens' more Dostoyevskian aspect. He flirts with being a Holy(secular) fool. He meditates, he is virtually oblivious to what goes on around him: until somebody steals his rug.

But the Big Lebowski and the Nihilists do get their come-uppance. Donny's death may be the price Lebowski and Walter pay for their own double-crossing money theft scheme.

If "Fink" is the Book of Daniel, and "Serious Man" is the Book of Job, I wouldn't be surprised to see more parallels between Coen films and the Old Testament, both in structure and sensibility.

I prefer Old Testament morality to the New one. It appears to square more with my experience. In the novel True Grit, Mattie tends to lean more towards retribution over any inclination to listen to "Vengeance is mine, sayeth the Lord." With her thoughts on Election, she implies that God's Grace is separate and largely inexplicable. As she writes, "You must pay for everything in this world one way or another. There is nothing free except the Grace of God. You cannot earn that or deserve it."

In comparison, it seems to me that The Big Lebowski is just too affectionate a portrait of a ne'er-do-well to have any proper sense of justice (not to mention the Dashiell Hammett plot grafted on). I wonder if people love that film due to the way it exonerates loafers like Lebowski.
February 13, 2012 at 12:27 PM

Anonymous said…
Ultimately, I think I agree with you about "Lebowski". It fits much more into the Coens' "Hudsucker Proxy" and "O, Brother" paradigm than any true old world justice of God/Fate milieu. Although, there is certainly a lot of the fickle nature of Fate in all three films.

Overall, I'd say that the Coens feature a cinematic world of ancient morality in contemporary(esque) settings, with a healthy comedic dose of "I'd rather be dumb and lucky than actually good".

And yes, as regards "True Grit", Mattie's Calvin moral dowdiness must have appealed to the Coens right away.
February 15, 2012 at 2:01 PM