"May the odds be ever in your favor": 8 notes on The Hunger Games 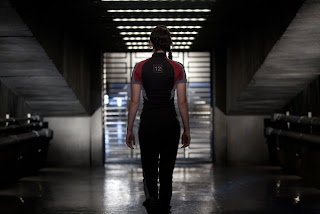 "And so it was decreed that each year, the various citizens and districts in the country of Panem that each section would offer up in tribute one young man and one young woman, to fight to the death in a pageant of honor, courage and sacrifice. The lone victor, bathed in riches and perfection for the rest of their life, would serve as a reminder of our generosity and our forgiveness to the rebels... to everyone."

1) I find The Hunger Games more compelling as an idea, or a narrative with subversive implications, than as an actual film.  The film only goes so far before it begins to resemble yet another teen-oriented movie.  Haven't we seen an elect gang of kids transported on a train to a magical land before?  Or a heroine who has not one but two leads forlornly in love with her? (Oh, the anguish when a romantic scene cuts to the other one being neglected! Time to choose between Team Gale (Liam Hemsworth) and Team Peeta (Josh Hutcherson)).

2) The Hunger Games suffers from the commercial dread of popular young adult novel beginning-of-the-movie-series franchisitis.  Everyone involved in the film is so bloody concerned with getting the book right (so as to not annoy the fans), the movie scarcely has a chance to exhale. Many of the scenes come across as earnest and square amidst all of the turbo-futuristic satirical trappings of the storyline.  One would like to think that Woody Harrelson as the drunken mentor Haymitch Abernathy might have some potential as a trickster figure free to make cracks at the movie's expense, but he no sooner shows up than he crudely telegraphs what a drunk he is (by grabbing a bottle of whisky), and stumbles off.  Later, we see him sober up by refusing a drink. Everything seems too programmatic, the narrative too rigid to encourage anyone to show much subtlety in their portrayals.

3) Having read half of Suzanne Collins' novel, I can understand the book's adolescent appeal (it's especially funny when Katniss acts like a sullen brat.  On page 92, when Haymitch becomes too domineering, we get this sublimely young adult passage: "I bite my lip and stalk back to my room, making sure Peeta can hear the door slam.  I sit on the bed, hating Haymitch, hating Peeta, hating myself for mentioning that day long ago in the rain.")  Unfortunately, perhaps due to the book's target audience, most all of the adults tend to be cartoonishly two-dimensional.  I like Elizabeth Banks' previous work, but as Effie Trinket, she's both unrecognizable and shallow, a grotesque figure warped by an evil empire's need to project itself. There's no particular reason why the rich in the future land of Panem couldn't wear decently styled clothes, but Collins and the filmmakers picture them as garishly brightly-colored with overly baroque beards, at times reminding me of Oz or the face-painted post-apocalyptic underground inhabitants of A Boy and His Dog (1975) if not the rich grotesques of Brazil (1985) or Metropolis (1927).  I imagine that Stanley Tucci enjoyed playing the ultimate talk show host Caesar Flickerman with his bright blue pompadour, but, while funny, he's ultimately just as limited a creation as the other adults. Only Donald Sutherland's relative gravitas as President Snow, the ruler of Capitol, the one percenter who does not like underdogs, hints at something more. I couldn't help being reminded of Sutherland's much more nuanced work as Hawkeye Pierce in Robert Altman's MASH (1970), where baby boomer anti-war rebellion shows itself in the seemingly random episodic way the film was made.  In comparison, The Hunger Games, under Gary Ross' straightforward direction, remains far too serious about hitting plot points and catering to the youth market.

4) Like much science fiction, The Hunger Games functions as a distorted mirror to contemporary economic, cultural, political, and environmental issues. 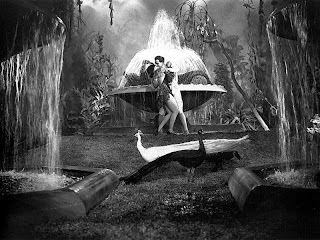 5) Environmentally, as Brian Merchant points out, the world of The Hunger Games has already irrevocably changed due to global warming, as implied by this passage: "[The mayor] tells of the history of Panem. He lists the disasters, the droughts, the storms, the fires, the encroaching seas that swallowed up so much of the land, the brutal war for what little sustenance remained. The result was Panem, a shining Capitol ringed by thirteen districts…” Furthermore, even though Katniss is relieved to find that she gets to fight the Games in the woods, those woods are artificial creations electronically manipulated by the Games officials as they please. So, Collins' story seems split between the view of man as either a victim or the controller of nature.

6) As Katniss strives to win over sponsors through her carefully staged public appearances before the games begin, The Hunger Games proves itself just as much concerned with the process of constructing a celebrity identity as in readying its characters for battle.  What the viewing audience wants is a compelling story, so Peeta's public declaration of love for her enhances Katniss' appeal.  Since nascent celebrity is all about appearances, Cinna (played by a rather humorously sparkly Lenny Kravitz) works hard to evoke fire in Katniss's outfits, which brings attention to her and helps sell the Dragon Tattoo-esque slogan "Katniss, the girl who was on fire." In her sullen way, Katniss reminds us frequently of the artificiality of these techniques, but they work.  As an unknown from a poor Appalachian district (that otherwise tends to wear dreary 1950s clothes), Katniss has to forge a relationship with the crowd so that they (and by implication, we) can share vicariously in her dramas of revolt.  Her emotional upheavals are yet another commodity, like her killings, to be sold to sponsors. Katniss learns that the media doesn't care what she's actually like.  She must learn how to exploit whatever aspects of her past self that she can.

7) The film shows us the sickly psychological and cultural effects of constant electronic surveillance, never more so when some genuine emotion may be expressed for a mass voyeuristic audience. When Katniss pauses during the games to note a camera inside of a hole in a tree right near her (and filming her), I wanted to shout, "The Truman Show! More relevant than ever." Later in the movie (slight spoiler alert), Katniss and Peeta can't share a tender The English Patient-esque moment in a cave without the scene cutting to various goofy but official looking guys observing them in the Hunger Games media command center or Haymitch leaving her note saying "You call that a kiss?"  I remember seeing similar pseudo-romantic but observed scenes in This Means War.  Do emotional scenes need some onlookers to make them matter nowadays?

8) After all, what kind of weird ancient Roman generational atavistic pleasure are people getting from watching young people kill each other?  The movie could prove useful to the those encouraged to learn survivalistic fighting techniques, but even though The Hunger Games pays cynical lip service to Occupy Wall Street-style revolt when the people of District 12 (or is it some other District?) start to riot after Katniss sends them a three-fingered salute on TV, the movie and the book emphasizes how rigged the Hunger Games actually are. Logically enough, a tribute is seen as a "walking corpse" as soon as s/he is selected, since 23 out of 24 tributes must die. Effie Trinket and President Snow are fond of repeating the slogan "May the odds be ever in your favor" when giving speeches to the commoners, but this Darwinian struggle in the woods is really a mediated distraction from what's really going on: a government demanding sacrifice of two youths in exchange for each district's continuing survival. The powers that be cynically use adolescents as disposable puppets for theirs and the larger population's bloodthirsty appetite. At one point, Snow considers why the rulers don't just save themselves the trouble of the Games and "execute all 24 tributes all at once"? Collins likes to suggest that, as in the similar Shirley Jackson short story "The Lottery," there are darker, bloodthirstier forces at work behind the official propaganda, and that gives The Hunger Games an edge that readers and viewers can understand.
Labels: The Hunger Games

Richard Bellamy said…
I find The Hunger Games more compelling as an idea, or a narrative with subversive implications, than as an actual film.

You point out the silly prose and the silly triangle with the Team Peeta - Team Gale elements. That continues in the second book, which I am reading now. Once again, it's a case of "Bella" can't make up darn mind.

But things are getting very serious in Book Two, and I'm enjoying that, as I enjoyed the gravity and seriousness of moments in the film that are less dramatic in the book.

Interesting about your reference to Brazil. In a futuristic dystopian mood, I re-watched that recently, and the gaudy Capitol costumes and hairdos seem to owe a lot to that far-out movie.
March 25, 2012 at 5:10 PM

I just learned from a friend that the movie version includes several late behind-the-scenes command room moments that marks a major change from the book. I wonder why the filmmakers included them?

I also never got around to consider Jennifer Lawrence's work in the movie. It seems ironic that aspects of the storyline of The Hunger Games seems to parallel and foreshadow her abrupt advancement to high level fame. She's an excellent actress, and she grounds the film well (she conveys a sense of emotional honesty), but I miss her work in the more modest and genuinely edgy Winter's Bone.
March 26, 2012 at 12:14 PM

Richard Bellamy said…
Lawrence was definitely excellent in WINTER'S BONE. The whole hunt for who would play Katniss was somewhat like the search for Scarlett O'Hara. She has benefited from the hype. Now teens should see BONE.
March 26, 2012 at 12:56 PM

bd said…
It was interesting to me too that the surveillance aspect was so amp'd up in the movie. Repeated shots to the master control room increased the sense of voyeurism and manipulation that I felt compared to when I read the books.

The Film Doctor said…
Thanks, BD.

I still wonder about two things:

1) how much subversive potential this franchise could have. As Donald Sutherland points out:

"This film has a chance of being something that can change things. This film, through that character of Katniss Everdeen, could be a catalyst, could be a motivator that makes a generation of young people who have been by and large dormant stand up and take some kind of political action. I wasn't trying to define the political action; I just thought that through this allegory they could become aware of the political structure surrounding them, and the injustice that there is inherent in it."

2) How much does this film cynically cater to our jaded late-American Empire tastes in gladiatorial combat?
March 27, 2012 at 4:18 AM