"Define worse": 7 notes on Thor: The Dark World and its villainous elves 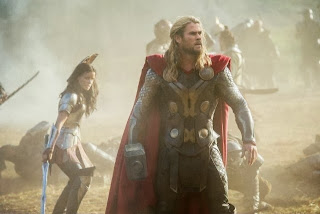 1) In comparison to last year's witty, winning The Avengers, Thor: The Dark World has a perfunctory air as if the people at Marvel studios sulkily churned out what little they could under the commercial obligation of maintaining the Thor brand (I prefer Captain America). The result is hallucinatory but campy, leaving me wondering where I've seen such tropes like multiple realm convergences (Tomb Raider?) and villainous elves before. We get planets like Vanaheim, where the frost monsters dwell, and Svartalfheim where the abandoned husks of Dark Elf spaceships lie scattered about the barren plains under brooding shadows. At least the names are creative.

2) Many years ago, in the fairy tale beginnings of Asgard, Dark Elf Malekith the Accursed (a very pale Christopher Eccleston with blonde hair extensions) and his lieutenant Algrim vow revenge after the Asgardians place his beloved Aether under a stone column (as some Asgardian says, "Bury it deep"). The Aether is a powerful but a vague substance suitable for overthrowing the Nine Realms, a kind of red tendrilly CGI murk, good for any nefarious purpose or plot point.

3) Thor (Chris Hemsworth) still has his red cape, a bulky physique, and a cute little hammer. Just as vampire Edward loves his mortal Bella Swan, Thor has a weak spot for Jane Foster (Natalie Portman) who has an infinitesimally brief life expectancy in comparison to his mighty self who can live for 5000 years. Thus, Thor's love for Jane is roughly equivalent to a human falling in love with a comely mosquito.

4) Meanwhile, in the abandoned-warehouse outskirts of London, Jane falls asleep after a leaf-strewn portal sucks her to some indeterminate metaphysical place where it just so happens that the Aether penetrates her flesh and makes her glow reddishly. Did the Aether somehow know that she loves Thor? Soon, Jane finds that she has the otherworldly power of blowing up any guards who may otherwise impinge upon her space later when she visits Asgard. As an ordinary human, it helps to have something to make Jane stand out amongst the proud warrior Asgardians who only vaguely resemble Norse mythological figures.

5) As part of his Dark Elf skullduggery, Malekith stabs Algrim with a dagger and then sticks a red Aether lava rock in the wound. This procedure causes Algrim to writhe and turn into molten lava with super powers. Wearing a rhino/Minotaur/bull mask on his head for dramatic effect, Algrim then frees the enemy warriors from their dungeon in the depths of Asgard, thus wreaking havoc on King Odin (a perpetually bemused Anthony Hopkins with a gold eye patch) and his warrior God kingdom. It's always something.

6) As the shapeshifter trickster figure Loki, Tom Hiddleston easily dominates Thor: The Dark World because he's subversive and unpredictable in comparison to the monotone Thor and all of his bland Asgardian warrior clan stuck within the limited acting parameters of a Marvel-heroic amber. Somewhat like Iron Man in The Avengers, Loki gets all of the fun lines like "Trust my rage" and "Wanna have a rousing discussion about truth, honor, patriotism?" and "Define worse" and "Satisfaction is not in my nature." Hiddleston cheerfully holds one's attention even when he's just sulking and reading a book in his forcefield-bound dungeon cell. 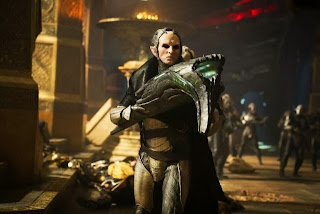 7) Later in the movie, after the Nine Realms start to Converge (causing CGI circles of different planets, Svartalfheim included, to appear the sky over Greenwich, England, of all places), Thor and the evil elves duke it out underneath a gigantic blade-like elf spaceship (a Harrow) that can disappear when it feels like it. The warriors keep falling in and out of various portals, reappearing in other realms amidst Jotenheim frost monsters, etc. At one point, while still fighting, Thor and Malekith land upon the Gherkin building in London and make a squeaking sound as they slide down the side of the skyscraper, alarming the office workers inside. So does Thor: The Dark World slide out of one's brain as one walks out of the Regal cineplex.
Labels: Thor: The Dark World

viNomadic said…
Sounds as if Stan the Man & his Marvel-ous scripting cabal mashed a fair amount of Nibelungenlied onto bare-bones Norse nomenclature?
November 12, 2013 at 1:01 AM

The Film Doctor said…
That's an interesting connection. A sampling of Wagner and a 16th century German epic poem? I kept thinking that evil elves could also serve a Christmas merchandising tie-in. I couldn't make myself get all that alarmed by the threat of universe-wide elf domination.
November 12, 2013 at 8:05 AM