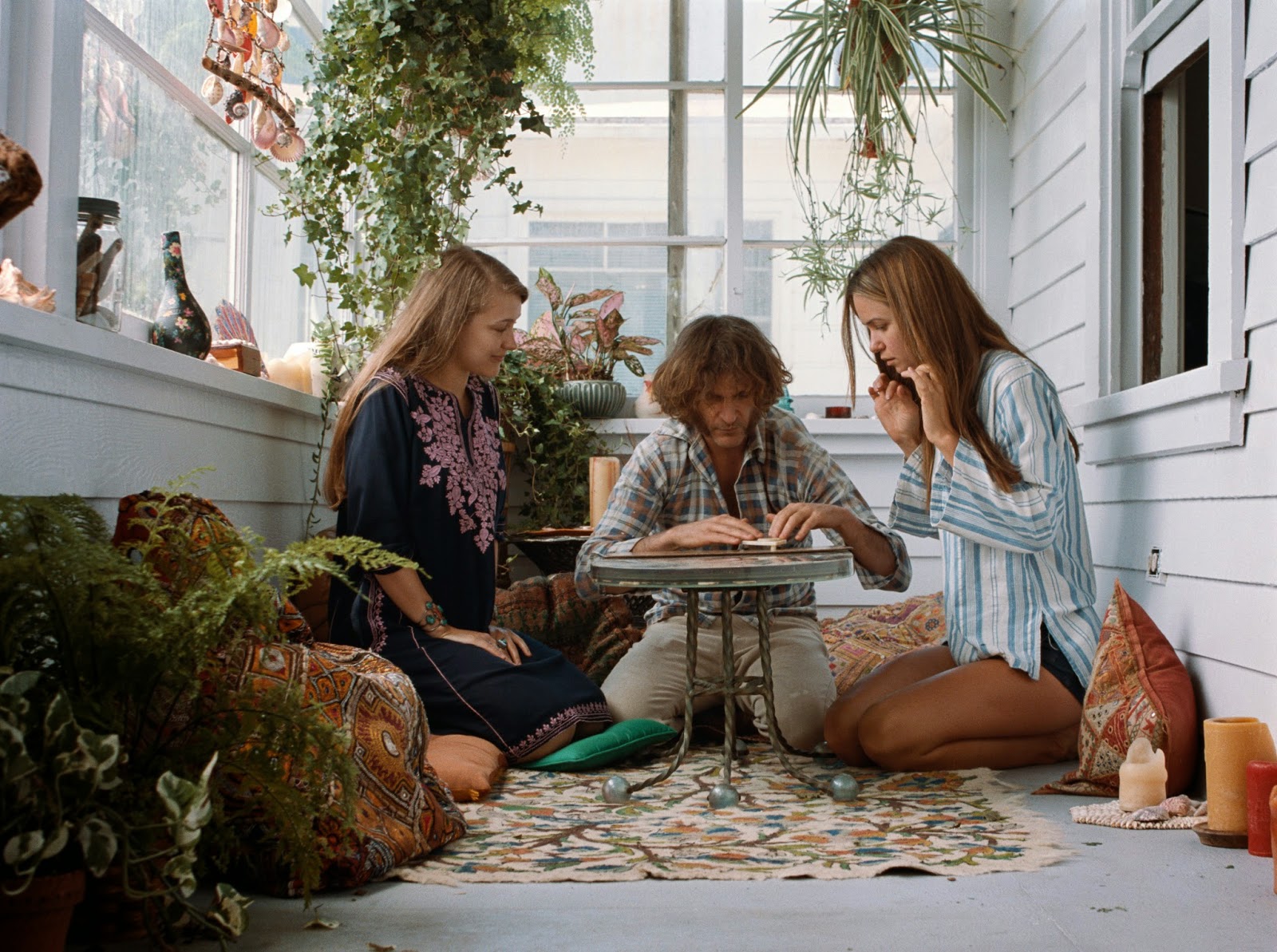 1) In comparison to the clarity of Boyhood, Inherent Vice is murky. It has an idealized romantic subtext with a long lost girlfriend Shasta played by Katherine Waterston, a fundamental division between the squares (Nixon, the FBI, the police) and the hippies in an early 70s Los Angeles milieu, the director of The Master with his actor Joaquin Phoenix playing Larry "Doc" Sportello, a grungy distracted private eye with mutton chop whiskers who constantly invites the viewer to wonder how a forgetful stoner could ever remember anything long enough to solve crimes, a convoluted Thomas Pynchon story line (I tried to finish the novel Inherent Vice twice but couldn't) with much skullduggery, secret organizations, heroin, pizza to help with the munchies, a kidnapped billionaire, gunplay, Benecio del Toro playing a lawyer reminiscent of both Savages (2012) and Fear and Loathing in Las Vegas (1998), Jena Malone, Reese Witherspoon, a lush neon-lit Rastafarian cinematography by Robert Elswit with lots of greens, reds, and yellows, and many characters asking Phoenix "What's up doc?" so that we can associate him with the trickster figure Bugs Bunny. Clear?

2) The movie seems written in a kind of code, not unusual with Pynchon, but it still left me wondering what Paul Thomas Anderson is saying. Even as it favors the hippie over the neurotic establishment types, Inherent Vice comes across as more serious than The Big Lebowski (1998). I was always bothered by the way the Coen brothers ultimately glorified Jeff Bridges' doofus central character as some sort of vessel of Zen wisdom, but Anderson seems to want Doc to cut both ways simultaneously. He is an anti-establishment authority figure, a sympathetic victim of police abuse, and a man capable of being quite astute in deciphering crimes with the boorishly humorous mega-cop Bigfoot (Josh Brolin with a buzzcut). In his recent films, Anderson likes to explore the various ways in which male authority establishes and undermines itself. In There Will Be Blood (2007), he diagrams the rapacious American capitalist mindset of Daniel Plainview, a man happy to seek profit absolutely regardless of the damage that it may incidentally cause to the people around him. With The Master (2012), Anderson ironically explores what little of mastery remains amongst con men, religious cults of personality, and damaged World War II vets.

3) In Inherent Vice, the only authority figure left is the freak with his John Lennon-esque military jacket, his granny shades, his sandals, and his long brown hair (at one point turned into a pseudo-Afro). One can see hints of Robert Altman's revamping of Philip Marlowe with a preternaturally nonchalant Elliot Gould saying "It's okay with me" no matter what happens (Altman's career seems like a good model for Anderson), but Inherent Vice's blend of social critique and slapstick satire makes it hard to know how to react. I get the feeling that the movie would benefit from the kind of slow, measured, note-taking viewing on Blu-ray that illuminates Scorsese's Goodfellas (1990).  In the meantime, much as Doc remains befuddled, I was often confused by Inherent Vice, perhaps because Anderson has conditioned me to look for Art when he was trying to be funny.
Labels: Inherent Vice Paul Thomas Anderson