"What good is the right to free speech?": a review of Laura Poitras' Citizenfour

I was stunned by Laura Poitras' Oscar-winning Citizenfour, both for its seeming nonchalance and its intensity, and because Poitras manages to pack so much tension and paranoia into scenes in which very little is going on. For much of the first half of the documentary, we mostly watch Edward Snowden hang around a nice hotel room in Hong Kong during the summer of 2013. He talks with Glenn Greenwald and a reporter from The Guardian, types on his laptop, watches the news as his release of top secret NSA-related information gradually dominates the worldwide press, tries to fix his hair, and occasionally looks out the window at the Hong Kong skyline much as Scarlett Johansson's character Charlotte did in Lost in Translation (2003).

Edward keeps insisting, in a distinctively low-key way that the powers-that-be will want to twist the story of the NSA's lies and transgressions in regards to our privacy into one that concerns him and his "crimes" alone, but I couldn't help fixating on his intelligent brandless demeanor. At first he wears a white t-shirt and jeans. He wonders about what to do about his stubble. One can sense that he's getting a bit uncertain and nervous about what will happen to him (later he goes underground, and (as we know) resurfaces somewhat in Russia), but meanwhile he lets Greenwald and others tell the story of the NSA as they will. Due to his job, Mr. Snowden had access to amazing amounts of top secret information flowing across his computer screen, including real-time drone footage. We also learn that people with that kind of access can focus on our data stream in real-time, tracking our phone calls, computer communications, purchases with a credit card, etc. We might get used to having our privacy violated in this way for the good of "national security," but as Citizenfour keeps asking us--at what cost? Do we have freedom of speech under total surveillance, or does the entire concept of freedom get cancelled out in the midst of the Patriot Act curtailment of civil liberties? When I bring up the idea with friends, they tend to assume that no one will ultimately care about whatever data stream they leave behind, but Citizenfour never allows that kind of complacency to reduce its tension. 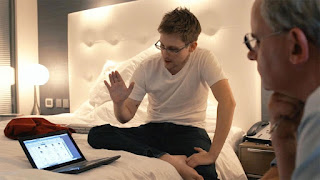 Meanwhile, as Snowden comes clean as the whistleblower and appears talking on video in the international press, the US authorities charge him with several crimes under the Espionage Act, in effect accusing him of being a spy. We see him suddenly getting lots of phone calls from mysterious people, so he hides out (now wearing a black suit) for a while in Laura Poitras' hotel room to get away from media scrutiny. I was struck by the movie's postmodern sense of drama. Mr. Snowden need not engage in a car chase, evade machine gunfire, or dally with some supermodel to gain worldwide attention. In fact, Citzenfour emphasizes how all of those Bond cliches have become passe. So many people, media outlets, corporations, and governments use so many dubious and increasingly desperate devices to gain attention and thereby attempt to influence others. In dramatic contrast, Snowden does next to nothing on screen as the dark implications of his release of information continues to spread today.
Labels: Citizenfour Edward Snowden Glenn Greenwald Laura Poitras