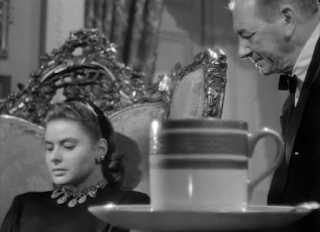 Guillermo del Toro may not necessarily be interested in being subtle. I enjoyed the first third of Crimson Peak given its Age of Innocence portrait of Buffalo, New York, its lurid orange and yellow lighting, and its overall sense of maximalist aesthetics (with Jessica Chastain as the evil sister Lucille of Thomas Sharpe (Tom Hiddleston)). We quickly learn what she's capable of as she points out how moths eat butterflies before lowering a butterfly down to be crawled over in close-up by ants (a reference to the beginning of Blue Velvet (1986)). Relatively innocent writer Edith Cushing (Mia Wasikowska), i.e. the butterfly, suddenly finds her father's head mysteriously bashed in, so she rushes into the debonair Thomas' arms, and before one can say Jane Eyre she's swept off to the delightfully decrepit Allerdale Hall where the snow falls through the roof onto the living room floor, the plumbing tends to bleed instead of gush water, reddish ghosts appear in most scenes, and Thomas explicitly tells Edith to not go down to the wine cellar, I mean basement.

So far, so richly gothic romantic, but then I started to notice the Notorious (1946) allusions. Having taught the movie for many years, I find that Notorious (1946) is not my favorite Hitchcock (Psycho (1960) has more of a kick), but it's certainly one of Hitchcock's most restrained allusive movies, built much like a Mallarme poem in its willingness to suggest rather than overtly show anything. In comparison to most, Notorious is a model of civilized constraint where Cary Grant as Devlin need only gesture towards his suit coat to suggest that he may have a gun, Alicia's (Ingrid Bergman) most vulgar act is to swoon onto a chess-board like floor, and the evilest Nazi thanks his host for a superb dessert before doing anything offscreen as unseemly as kill someone while driving the poor man home. With Notorious, Hitchcock never overplays his hand; he merely hints, and somehow the movie gains in stature the more it hides its vulgar underlying drives and activities under consummate technique.

Yet, (spoiler alert), whereas Alexander Sebastian (Claude Rains) and his mother decide to slowly poison Alicia (using coffee) once he finds out that she's an American agent later on, Lucille Sharpe starts poisoning Edith (using tea) as soon as she arrives at Allerdale Hall. Why? Why not? It ramps up the drama. Soon enough, we see poor Edith sitting in a very Notorious-esque chair as she's impinged upon on both sides by both Thomas and Lucille. That chair, particularly, made my jaw drop. Does del Toro really want us to make all of the connections to Hitchcock's movie, or is he counting on us not knowing it that well, so he can make postmodern allusions with impunity? Later, when the kindly but bland doctor McMichael of Buffalo shows up unexpectedly in Cumbria England to save poor Edith after she falls several floors onto a lump of snow, I wanted to shout "Charlie Hunnam is no Cary Grant!" 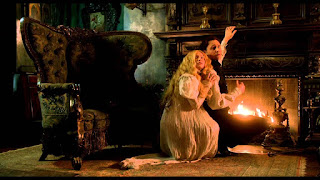 Given the increasingly gory, bloody, ghostly, and lurid extravagance of Crimson Peak, every escalating Notorious allusion kept reminding me of exactly how much better Hitchcock's film is, and I can't imagine that that was del Toro's intention. By the end of Crimson Peak, even given its excellent set design, costuming, cinematography, and acting, I was reminded most of Tim Burton's less successful Gothic confections like, say, Sleepy Hollow (1999). Del Toro also makes a major allusion to Kubrick's The Shining, but with Notorious the cognitive dissonance became too distracting. Crimson Peak reminded me of The Hateful Eight (which invites similar comparisons to Stagecoach (1939)) in their compulsion to take everything too far in the third act, perhaps because both writer/directors (Tarantino and del Toro) are concerned about the easily distracted public turning to something else on their cell phones. It's enough to make one long for duller, more sedate classic movies.
Labels: Crimson Peak Notorious