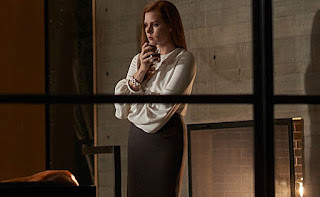 ---"Images detached from every aspect of life merge into a common stream, and the former unity of life is lost forever. Apprehended in a partial way, reality unfolds in a new generality as a pseudo-world apart, solely as an object of contemplation." --Guy Debord

---Harlan Ellison on why writers should get paid

---J.G. Ballard "predicted YouTube nearly 30 years ago, in an interview with Vogue, a medium 'in which each of us will be both star and supporting player. Every one of our actions during the day, across the entire spectrum of domestic life, will be instantly recorded on videotape. In the evening we will sit back to scan the rushes, selected by a computer trained to pick out only our best profiles, our wittiest dialogue, our most affecting expressions filmed through the kindest filters, and then stitch these together into a heightened re-enactment of the day.'"

---Understanding the Cinematography of Raoul Coutard

---trailers for Brimstone, Kong: Skull Island, Nocturnal Animals, Guardians of the Galaxy, Vol. 2, A Boy and His Dog, Beauty and the Beast, Passengers, Ghost in the Shell, and The Circle

---"I assume (perhaps incorrectly) that the future is all too liable to have its way with today’s most sophisticated encryption technology. I imagine that the world’s best-kept secrets — those of both private citizens and state institutions — will one day sit in plain sight on whatever it is that our descendants display data on.

Privy to that information while looking back at us, our ancestors will know us differently than we currently know ourselves, just as we now know the Victorians quite differently from how they knew themselves. The past, our own past, which our descendants will see us as having emerged from, will not be the past from which we now see ourselves emerging, but a reinterpretation of it, based on subsequently available information, greater transparency and fewer secrets." --William Gibson

---"It's Happening Here" by Anthony Kaufman


---"The next new media will perhaps be some form of virtual reality. (This was prophesied by the cartoonist Walt Kelly during the 1960 presidential campaign when Pogo tells his turtle friend that American elections seem to be pretty backward: 'What we ought to do is elect first a ghost writer an’ then find a candidate what fits the style.') Of course, Trump did practice that as well. Trump’s true innovation was the combination of TV entertainment and social media—something that any number of television shows, like the sitcom How I Met Your Mom, attempted by giving their fictional characters a social media presence. Trump began tweeting six or seven years ago, around the time that The Apprentice mutated into The Celebrity Apprentice. To use a film studies term, this form of direct address served to suture the audience into the show.

I’m not a determinist. Trump’s avant-garde use of media did not insure his election. Like all winners he was lucky—amazingly so. James Comey did him an enormous favor, as did the arrogant Clinton campaign gurus who decided Michigan was safely blue. But as Trump also benefited from fake news, chatbots, and internet trolls, it would be foolish to underestimate the way in which his facility with the media enabled him to shape the election’s terms and basic reality.

Using the principles of reality TV and the power of Twitter, Trump was able to create the spectacle and almost immediately annotate it to an audience of fans, just as Lady Gaga might address her 'monsters.' This powerful double spin offered a sense of community. No wonder people bought the illusion of straight talk and authenticity. Whether conscious strategy or megalomaniacal intuition it was enough to win this election–and astound the hard right Republicans who will be directing the show." --J. Hoberman