How does one design a video production class nowadays?--a correspondence with Morgan Honaker 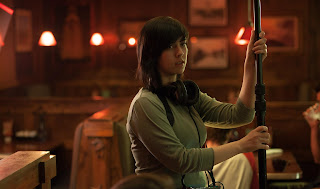 I teach a 2 1/2 week long interim video production class in January, and every year, I wonder what's going on in the filmmaking world that could help with the course. To help answer this question, I ask two of my star alumni filmmakers--Morgan Honaker and O. K. Keyes for their insights, suggestions, and help with the class. Here's a copy of my recent correspondence with Morgan.

First, I learned that she would not be able to assist the class in person, so I wrote:
I appreciate your help with the video production class in recent years, even if this one doesn't work out.

This year, I'm still figuring out how to set up the proper exposure on the Canon T6 DSLR and whether or not I can find some last second lighting on Amazon that doesn't cost too much. Given all of the recent changes in technology, etc., video production class always leaves me wondering if I know what I'm doing.

At any rate, I hope your year has gone well.

Sorry for the late reply - the holidays kept me a bit busy. I haven't worked with the Canon Ti6, but here are some articles I found about using it in different exposures . . .

Also, in terms of lighting, I would highly recommend investing in a couple of light meters. They can teach students the importance of correct aperture and focal distance better than anything else, and you'll see a vast improvement in their lighting. You can find decent ones for a good price on Amazon (https://www.amazon.com/Leaton-Digital-Luxmeter-Illuminance-Display/dp/B018QLIVSC/ref=sr_1_1?ie=UTF8&qid=1482971419&sr=8-1-spons&keywords=light+meter&psc=1). There are also smartphone attachments that function as fairly reliable meters, which you can also buy on Amazon (https://www.amazon.com/Luxi-All-Smartphone-Light-Attachment/dp/B00PKTWQTY/ref=sr_1_13?ie=UTF8&qid=1482971515&sr=8-13&keywords=light+meter).

For lights, I would go with some white-lights that you can use gels to manipulate the color with. Fresnels are great lights to have (https://www.amazon.com/LimoStudio-Photography-Television-Continuous-Spotlight/dp/B00D9UVQWO/ref=sr_1_6?ie=UTF8&qid=1482971537&sr=8-6&keywords=film+lighting+kit), but they do get very, very hot, so it would be a good idea to invest in some gaffer gloves (https://www.amazon.com/Working-Mechanic-Gardening-Scratches-Injuries/dp/B01FIQP7V2/ref=sr_1_4?ie=UTF8&qid=1482971764&sr=8-4&keywords=heavy+duty+work+gloves). You could also try out some LED lights (https://www.amazon.com/dp/B00LF1BG9M?psc=1), but you will definitely need to get some gels to manipulate the color (https://www.amazon.com/Lee-102-Light-Amber-Filter/dp/B00BHIJAI2/ref=sr_1_5?s=photo&ie=UTF8&qid=1482971886&sr=1-5&keywords=light+gel+rolls). It's hard to find gels that are long enough, so you may want to check out B&H video/audio warehouse. If you're trying to get better lights, you may also want to invest in some c-stands, nets, and flags, also.

Hope this is helpful (and not too confusing)! 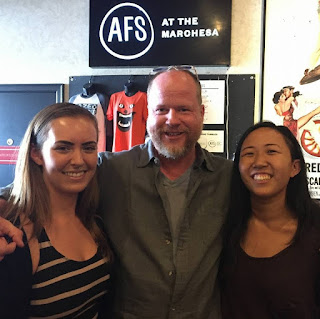 Last year, the students in the different groups ended up stressed about completing their longer movies on time, so I plan on scaling back their length this year. I'm still not sure how much one should devote to teaching them technique in comparison to how much time to let them learn by filmmaking. We may have erred on leaning towards the former, so we created too much pressure on them to use fancier approaches after so many presentations on different subjects. Turning to the actual making of the movie proved tricky. At one point, a director balked at first because he didn't get to shoot his movie idea. Another group over-relied on "fixing it in post." At what point does the equipment become too complicated to be effective? One fellow, who proved a good cinematographer, will return and help me out in teaching the new class how to use the camera.

This year, my old assistant chose to go on a trip to Costa Rica, so a new French teacher will help out. We will see how that goes.

Cheers, and thanks again,

I also found a couple of other good lights. If you're going to use the LEDs, I would definitely recommend getting some tungsten lights and some lights with gels as well. Here are links to a couple of decent ones . . .

It's definitely a hard balance to find, especially with the limited time you guys have in the class. I think about 1.5 - 2 days of crash course basics in narrative, cinematography, lighting, sound, and editing (both sound and picture but with an emphasis on the latter) would be sufficient. However, I personally think that narrative is the most important part of filmmaking, so I would spend the most time on effective plot structure (3-act structure, character development, an ending that is both slightly surprising but also feels inevitable, etc.). It's very easy to make something look pretty, but it's much more difficult to convey a story effectively.

It wouldn't be a bad idea to consider making the final project no-dialogue. It's a great way to make your students hone in on their story visually and it forces them to think more creatively about what sorts of stories they can tell. And, in general, films should be shown and not told, especially considering that you guys won't have access to really good microphones and post-production sound mixers. Just something to think on.

If you are going to include dialogue, though, I think 5-7 minutes is a good length for a week and a half of planning, shooting, and post. And definitely don't let any of them say that they'll "fix it in post." Unless you're on some million-dollar Hollywood film where the crew can afford to do that, the film is going to be awful if too much is done in post-production. Trust me, I have seen it countless times.

Well, perhaps your assistant wanted to throw you into a fit of stress and angst that would trickle down to your students and make their filmmaking better. You'd be amazed what a good amount of stress can do to improve the quality of a film.

If you have anymore questions, feel free to let me know!

At this point, I asked her if she would mind sharing this correspondence on the film doctor blog. I also asked her to finish with what she's been working on lately:

I wouldn't mind at all.

Recently, I've been trying my hand at composing for film and video games. I took a class this past semester where we recreated the score and sound design from parts of Alien, Requiem for a Dream, The Grand Budapest Hotel, a few advertising logos, and for my final project, I chose to recreate a scene from the show Avatar: The Last Airbender. I have only done a little scoring before now, the majority of which was for an arena shooter video game. However, I am going to be doing sound design and score for a independent short film in the next few weeks, and I'm hoping to have a composing reel uploaded to Vimeo before the end of January.

As for film more specifically, I've been working on my skills as a mixer. I'm going to be mixing a feature-length independent horror film in the coming year that we're hoping to submit to Fantastic Fest. I've also started mixing for documentaries and am currently working on one about PTSD and the lives of current veterans in America. In addition, I'll be working as a freelance production sound recordist and post-production mixer for a Texas advertising company that is hoping to open a branch in Austin in the coming year.

I'm also going to be working on a media studies thesis in the spring semester. It will be styled as a video essay (as seen on the YouTube channel "Every Frame a Painting" and "The Directors Series" on Vimeo) in which I will be examining the ramifications of modern Hollywood from 2012 - present. In short, I'm arguing that the current trend of recycled stories - these include remakes of classic movies and video games (Ben Hur, Poltergeist, Mulan, The Lion King, Assassin's Creed, etc.), continuations of old series (Star Wars, BladeRunner, Jurassic Park/World, etc.), and the endless continuation of new series (pretty much any Marvel/DC movie) - will lead to a decrease in audiences' interest in theater-movies and could mark the beginning of the inevitable decline in the theater system as a whole. In addition, by using only those stories that have been proven to make money, Hollywood is leaving little to no room for audiences to discover and explore new ideas through movies. Furthermore, independent films that are telling new stories are finding it difficult, if not impossible, to get their films into theaters (Swiss Army Man, Captain Fantastic, Moonlight, etc.), giving those filmmakers little reason to continue practicing their art. I'll release this thesis on Vimeo by May 2017 (if all goes well).

I'll still be working quite a bit as a freelance sound designer and mixer, but I am trying to broaden my skill set to composing and back to media studies critique in the coming year.

Hope this is what you were looking for!