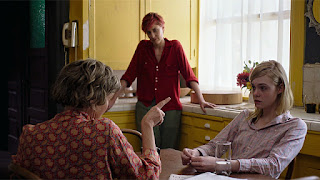 Last weekend, I watched, or tried to sit through Mike Mills' rather lengthy 20th Century Women on Blu-ray, in part because I have great respect for many of the actors involved, and also because I liked Mike Mill's 1979 internet radio station. Sitting through the movie, however, proved to be a traumatic experience in which I relived all of the rage and sheer angst provoked by Mike Mills' previous movie entitled Beginners (2010) (Mills' earnest movie-making style gives me the unholy fantods). I did, however, manage to write down some notes on 20th Century Women, which follow:

1) Such acting talents! Such skills in casting! Such a terrible movie.

Many years ago, Annette Bening had a role as a seductive soulless con woman in The Grifters (1991). Oh, how I miss those days.  Now, Bening plays Dorothea, a Birkenstock-wearing earth mother of 1979, the maternal glue who brings together various quirky characters. She endlessly worries over her frail sensitive 15 year old son Jamie (Lucas Jade Zumann) who is just trying to learn how to be a man just before Reagan's '80s and Mtv hits the scene in Santa Barbara, California.

After getting off of his skateboard, Jamie encounters his mother in the kitchen of their funky 1979 house. He gazes soulfully off into the distance, his lip quivering slightly.

"What about my feelings?" cries Dorothea. She lights a menthol cigarette.

"I can never have children," cries out Abbie (Greta Gerwig), who plays a red-dyed head artist from New York City estranged for her mother, but who still enjoys dancing, flailing around to 1979 new wave bands like Talking Heads. Later, someone will write "Art Fag" on Dorothea's Volkswagen Bug. This term designates that some prefer Black Flag over Talking Heads, but the problem is that Mike Mills wouldn't know how to depict a genuinely punk character even if she kicked him with her Doc Martens in the head.

3) I can see exactly why Bening, Elle Fanning, Gerwig, and Billy Crudup would go for Mike Mill's screenplay, because they get to emote and re-examine their deeper feelings in every scene. If their characters' home was on fire, they would probably die because they'd be too busy therapeutically pausing to consider how they might emotionally react to the fire just before it mercifully burnt them alive. Billy Crudup gets to play William, who looks and acts exactly like Russell of the infinitely superior Almost Famous (2000). Why wouldn't Crudup want to return to one of his best roles? William is not sure what to do. Should he sleep with Abbie, or kiss Dorothea, or fix car engines, or make bowls and open a ceramics shop? Or, how about Elle Fanning, who plays Jamie's platonic friend Julie? She likes to lie next to Jamie at night in bed, but she can never get romantically involved with him because he's too smart and sensitive and inclined to explore his feelings, etc. Abbie, meanwhile, can never have children, but that proves (spoiler alert) untrue, but not until after Mills can milk that bit of drama over and over in a very sensitive fashion. Did I mention that all of the characters watch Jimmy Carter's "Crisis of Confidence" speech? Be advised: everyone dances together towards the end of the movie in a hotel room. Dorothea lights another menthol cigarette. Jamie meanders down a hill on his skateboard.

4) Mills has so much trouble bringing this endlessly meandering ensemble drama into some sort of landing after flattering each movie star with his or her star-making scene. . . . .