The mystery of creation and terminal sequelitis: a discussion about Alien: Covenant 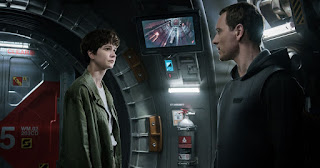 One afternoon recently, deep in the heart of the Film Doctor compound, Wickham F. and I discussed Alien Covenant:

FD: We both came out of Alien: Covenant reasonably entertained, but I had a lots of mixed feelings about the movie. I've taught the original Alien (1979) in my science fiction class, and Alien: Covenant struck me as being way way too similar to that film. It had the same music, the same scenes in terms of the way the aliens took over people, and a lot of the same plot developments. It seemed more like a remix than a sequel in which Ridley Scott was intent upon returning the viewer to favorite moments in the past in some sort of greatest hits. Alien: Covenant came across as such a bizarre cannibalizing of the original movie, which does hold up amazingly well. Part of the charm of Alien is that the technology is so crude . . .

FD: So much of the movie could be terrible, but because of the biology, the imagery, and the design hold up so well.

FD: I have great respect for the first movie, but this one is, what, number 7?

W: I think, ultimately, there is this inherent problem with the Alien films, in that they have to somehow get to a mysterious planet where they're all going to get killed.

W: And there has to be some motivation for them to get there, and they always go unsuspectingly. There are plot structure elements that are very repetitive from movie to movie. But still, Prometheus was a very daring choice for Ridley Scott as the director, because he kept telling people, it's not really an Alien prequel. And then, the studio executives objected to that, so that at the end of Prometheus, he sneaked in an alien to accommodate the suits. Scott attempted to make a different type of movie set within the Alien universe, and because that film got so much backlash, so much confusion, basically, when people where going in expecting one thing and getting something way more philosophical with inconvenient plot holes and weird character motivations. I imagine that Scott was more recently feeling pressure to make something more akin with those original Alien movies. So, even with trailers, you could tell they were saying "There's a xenomorph, they're landing on a planet, and there are head crabs. We're going back to what you love, people. Come on out to the theater."

FD: Isn't that a form of completely selling out? At the same time, Alien: Covenant has some thought-provoking mise en scene--a massive open space with twisted roasted corpses all around that reminds one of Pompeii, massive human head sculptures. 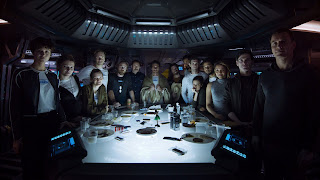 FD: Michael Fassbender's portrayal of the android David is compelling, but at the same time, Alien Covenant comes across as a bit pretentious, with David playing Wagner and sometimes reciting Shelley's "Ozymandias."

W: Meanwhile, no one makes science fiction horror movies anymore. And if they do, no one makes them like Ridley Scott. I think Alien: Covenant is something of a bait and switch. It gets you in the door, thinking they're going to touch down on a planet, and bad things are going to happen. The movie starts off that way, but then Scott keeps building upon the mythology he began with Prometheus, which is the idea of creation, of God, the question where do we come from as humans? In Prometheus, David asks one of the scientists, "Why was I made?" The guy is drinking. He's kind of a buffoon, and he answers, "Because we felt like it."  And David replies, "How unpleasant it would be if someone told you that was why you were made?" (I'm paraphrasing.) And then, David takes some of the alien goo, and puts it in the scientist's drink.

At the time, audience members thought what the hell? And what I like about Alien: Covenant is that you have this android preoccupied with creation. We all know that Ridley Scott is obsessed with androids, even going back to Blade Runner (1982). So, Scott appears to be imprinting onto this recent movie his philosophical inclinations and questions, such as do robots have a soul? In Blade Runner, androids were obsessed with living. Due to their short longevity, they just wanted to live, and they weren't given that opportunity, because they are terrorists, basically.

So now, Scott explores the mystery of creation by developing David who is frustrated with where he came from. So, I can understand why some fans are upset, because Scott is basically and totally doing his own thing.

FD: But he's repeating his own thing.

W: He's repeating himself to some extent, but he's also mucking with the alien mythology. He's saying, to hell with all of that James Cameron stuff in Aliens (1986). Also, Alien 3 and 4 is stupid. I'm going to build my own weird backstory to the Alien ethos with my own agenda.

FD: When it comes to David, he's a delightful character. I like him in the scene where all of the humans freak out because an alien pops out of somebody (and Alien: Covenant fully explores other ways that infant aliens can burst out of human flesh in unexpected places. It seems like after awhile, you are going to run out of places to pop out of), but beyond that, I enjoyed how in the midst of a scene where everyone is completely freaking over this gruesome birth, David remains utterly cool. He has nothing to fear. He's completely calm and collected, and therefore delightful.

To keep going with spoilers, it turns out that David is a complete fan of the aliens. He enables them in various ways. He wants to encourage their reproduction and spread them across the various planets. David wants to treat them as superior beings, but ultimately these aliens never do a whole lot except go [hissing noise] and then kill people. It seems like, if the filmmakers want to treat the aliens as exceptional, then the aliens need to start developing language, but mostly, still, they are fun bugaboo horror villain characters who are not that much different from demented cats.

W: They have two mouths.

FD: Alien (1979) was so good about keeping the alien mysterious, and there was also the strong sense of the biological imperative, that the alien has to survive cleverly. Now, with Alien: Covenant, the aliens replicate, and get killed. A lot of that initial interest in their sophistication and mystery has been lost because we're getting used to them.

W: Yes. That's a problem with prequels. They tend to get rid of the mystery of villains, such as Darth Vader. I think you have to take the first Alien as a completely different beast, no pun intended. It's a slasher movie in space, stripped down, with believable characters, space truckers, etc. It's a minimalist film in comparison to the bloated blockbuster of today. 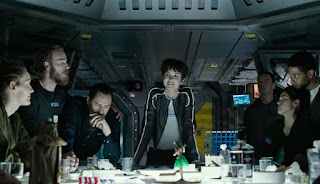 FD: And yet, Ellen Ripley (Sigourney Weaver) remains such a great female lead, and an influential character. With Alien: Covenant, one kind of remembers Daniels (Katherine Waterston) and Billy Crudup playing a weak captain named Christopher Oram. We also learn that James Franco played another leader who was killed off at the beginning. The crew mourns for him, but I couldn't figure out if we were supposed to be sad or happy because the character played by Franco was killed. I was cheered by the fact that he was dead on arrival like Kevin Costner in The Big Chill (1983).

W: There are some featurettes for Alien: Covenant that effectively set up the characters for the movie in ways in which the film itself does not. The featurette sets up some of the romantic subtexts and the relationships between the crew members, and you don't get any of that in the final product. As for your point about the problems with the villainous alien itself, I think that was probably due to studio pressures to return to the proven formula.

FD: In every week of 2018, we will get another tentpole sequel blockbuster-wannabe, and Alien: Covenant already seems to point in that direction. Potential audience members will get really really sick of all this rebaked reliable product, infinite repetition and terminal sequelitis.

W: This movie tries to please everyone.

FD: So, basically, you're saying that Prometheus proved too original, and so Alien: Covenant retreats from that.

W: Yes, Prometheus took more chances. The problem with Alien: Covenant is two-fold. The characters are criminally underdeveloped, so when they get picked off, you don't care at all. They're just fodder. Secondly, Alien: Covenant relies too much on the basic horror movie trope of minor characters wandering off without much motivation into dark corners just so they can get killed.

FD: After all, an exploration of the mystery of creation comes across as lacking if it's driven and defined by craven studio calculation. Ridley Scott deserves more than that.

W: He most certainly does.