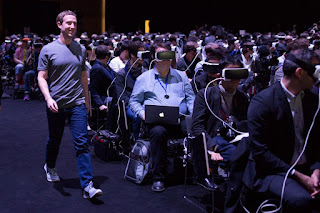 ---"Here’s Facebook denying that Russian propagandists bought ads from the company during the 2016 presidential campaign, and admitting, just a little while later, that they did. Here is Facebook admitting a little later still that, well, actually, the company distributed Russian propaganda to nearly 150 million people during election season. The company sold advertising to Donald Trump’s campaign much more cheaply than to Hillary Clinton’s (because Trump’s ads were so much more 'provocative' and, you know, algorithms). Advertisements which, by the way, could be so microtargeted that buyers could serve them up to groups of 'Jew haters.' But here’s Mark Zuckerberg, saying he considered the notion that Facebook had influenced the election in any way to be 'a pretty crazy idea,' a remark he later said he regretted." --from Mario Bustillo's "The Smallness of Mark Zuckerberg"

---"Facebook is the destroyer of worlds." --from Mike Shield's "Facebook's Algorithm has wiped out a once flourishing digital publisher"

---Facebook is “certainly right up to that line of practicing medicine not only without a license, but maybe without proof that what they are doing provides more benefit that harm.” --from Natasha Singer's "How Companies Scour Our Digital Lives for Clues to Our Health"

---"In many countries, Facebook is contending with a darkening reputation as a vehicle for disinformation and false news. The most recent example: Sri Lanka." --from Vindu Goel and others' "In Sri Lanka, Facebook Contends with Shutdown After Mob Violence"

---"Facebook is now so good at watching what we do online—and even offline, wandering around the physical world—it doesn’t need to hear us. After digging into the various bits of info Facebook and its advertisers collect and the bits I’ve actually handed over myself, I can now explain why I got each of those eerily relevant ads. (Facebook ads themselves offer limited explanations when you click 'Why am I seeing this?')

Advertising is an important staple of the free internet, but the companies buying and selling ads are turning into stalkers. We need to understand what they’re doing, and what we can—or can’t—do to limit them." --from Joanna Stern's "Facebook Really Is Spying On You, Just Not Through Your Phone's Mic"

---"Facebook has no incentive to change its ways. The money is too great. The issue is too nebulous to alienate more than a few Facebook users. The more that Facebook saturates our lives, families and communities, the harder it is to live without it."  --from Siva Vaidhyanathan's "Facebook Wins, Democracy Loses"

---"Nothing about Facebook is intrinsically organized or self-regulating. Its terms of service change fitfully, as do its revenue centers and the ratio of machine learning to principled human stewardship in making its wheels turn. The sheen of placidity is an effect of software created by the same mind that first launched Facemash—a mean-­spirited ­hot-or-not comparison site—but then reinvented it as Facebook, an 'online directory,' to prevent anyone from shutting it down. The site was designed to make the libertarian chaos of the web look trustworthy, standing against the interfaces of kooky YouTube and artsy Myspace. Those places were Burning Man. Facebook was Harvard." --from Virginia Heffernan's "Who Will Take Responsibility for Facebook?"

---"It reads like the plot of a sci-fi novel: a technology celebrated for bringing people together is exploited by a hostile power to drive people apart, undermine democracy, and create misery. This is precisely what happened in the United States during the 2016 election. We had constructed a modern Maginot Line—half the world’s defense spending and cyber-hardened financial centers, all built to ward off attacks from abroad—never imagining that an enemy could infect the minds of our citizens through inventions of our own making, at minimal cost. Not only was the attack an overwhelming success, but it was also a persistent one, as the political party that benefited refuses to acknowledge reality. The attacks continue every day, posing an existential threat to our democratic processes and independence." --from Roger McNamee's "How to Fix Facebook Before It Fixes Us"

---"What’s crucial to understand is that, from the system’s perspective, success is correctly predicting what you’ll like, comment on, or share. That’s what matters. People call this 'engagement.'" --from Alexis C. Madrigal's "What Facebook Did to American Democracy"

---"Facebook calls this 'frictionless sharing', which is its euphemism for silent total surveillance." --from Adrian Short's "Why Facebook's New Open Graph Makes Us All Part of the Web Underclass"

---ZUCK: yea so if you ever need info about anyone at harvard
ZUCK: just ask
ZUCK: i have over 4000 emails, pictures, addresses, sns
FRIEND: what!? how’d you manage that one?
ZUCK: people just submitted it
ZUCK: i don’t know why
ZUCK: they “trust me”
ZUCK: dumb f---s

---"In real-world terms, a part of Facebook still sees itself as the bank that got robbed, rather than the architect who designed a bank with no safes, and no alarms or locks on the doors, and then acted surprised when burglars struck." --from Kevin Roose's "On Russia, Facebook Sends a Message It Wishes It Hadn't" 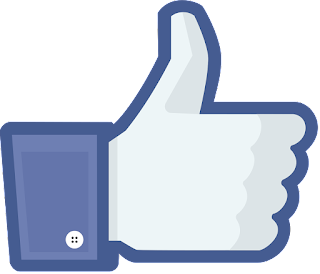 ---"One of our big focus areas for 2018 is making sure the time we all spend on Facebook is time well spent.

We built Facebook to help people stay connected and bring us closer together with the people that matter to us. That's why we've always put friends and family at the core of the experience. Research shows that strengthening our relationships improves our well-being and happiness.

But recently we've gotten feedback from our community that public content -- posts from businesses, brands and media -- is crowding out the personal moments that lead us to connect more with each other.

It's easy to understand how we got here. Video and other public content have exploded on Facebook in the past couple of years. Since there's more public content than posts from your friends and family, the balance of what's in News Feed has shifted away from the most important thing Facebook can do -- help us connect with each other.

We feel a responsibility to make sure our services aren’t just fun to use, but also good for people's well-being. So we've studied this trend carefully by looking at the academic research and doing our own research with leading experts at universities.

The research shows that when we use social media to connect with people we care about, it can be good for our well-being. We can feel more connected and less lonely, and that correlates with long term measures of happiness and health. On the other hand, passively reading articles or watching videos -- even if they're entertaining or informative -- may not be as good.

Based on this, we're making a major change to how we build Facebook. I'm changing the goal I give our product teams from focusing on helping you find relevant content to helping you have more meaningful social interactions."  --Mark Zuckerberg