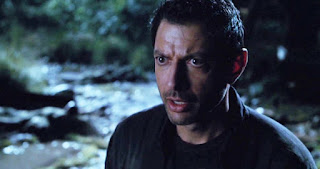 Some drink to remember, some drink to forget . . .  I'm still trying to forget The Lost World, Steven Spielberg's sequel to Jurassic Park that I hear just earned over 90 million dollars over its first weekend in the theaters.

For those of you familiar with the first movie, it turns out there was another island that served as a breeding ground for the Jurassic Park dinosaurs. At the beginning of The Lost World, a snooty British family happens to camp out on the beach of this island and their little girl nearly gets devoured by a bunch of foot-tall dinosaurs. Her mother screams, and the film abruptly cuts to the tall, vaguely sinister, and tired-looking post-Independence Day (1996) Jeff Goldblum as Dr. Ian Malcolm.

Jeff looks weary starring in this film, and I can scarcely blame him. He's the one character who seems to remember what happened in the first film when a corporation seeks to exploit the new dinosaur-growing technology. Why, he seems to ask, go through it all over again?

Dr. Malcolm finds himself blackmailed by the corporation, Ingen, to go camping on this island to protect, and ultimately save, his dinosaur-happy scientist girlfriend (where she came from is never explained). While on the island, he finds his adopted African-American daughter stowed away in the all-terrain RV for no really clear reason except that Spielberg likes to include children in his dinosaur death-romps.

Soon they all encounter another paramilitary force cruising around in jeeps to collect dinosaurs for an amusement park in San Diego, and then (guess) night falls, thuds are heard in the distance, and everything goes awry. 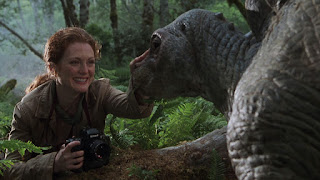 After this unlikely start, Spielberg serves up a bunch of action set-pieces most involving tyrannosaurus rexes, velociraptors, and those cute, but deadly, one foot dinos called compsognathuses who all munch their way through most of the two groups of explorers. People dangle from cliffs and t-rexes take voluptuous pleasure in drooling outside of tent flaps.

As survivors scramble for safety, I kept thinking of this film's curious resemblance to one sequence in King Kong (1933). Remember when that other expeditionary force wandered around Skull Island and encountered various dinosaurs as well as Kong himself? The Lost World basically repeats the same action formula without the ape.

As before, the main thrust of the film lies in how many different ways a man can get eaten. What is it like to be torn in half like a stick of beef jerky and devoured by two tyrannosaurs? People scream and go silent just before a fountain of blood gushes down. As in Anaconda (1997), you can usually tell by a character's appearance whether or not s/he will get eaten and how soon. 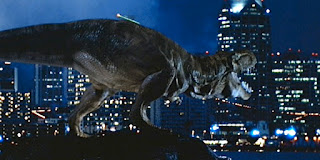 I found such meticulously story-boarded and planned pseudo-spontaneity boring. Except for adding on a few dinosaur species and placing a t-rex in San Diego, The Lost World follows much the same formula of increasing nastiness as we saw in Jurassic Park: the velociraptors come out like the dream team for the grand finale on the island. But aside from the many rainy nights in the jungle where puddles vibrate, the numerous dark warehouses where dinosaurs crash through windows, and the many times Jeff Goldblum looks up at something offscreen in fear and wonder, I found this film plodding, predictable, mechanical, and mostly humorless, a multi-million dollar argument in favor of keeping the dinosaurs extinct.
Labels: Jeff Goldblum Steven Spielberg The Lost World