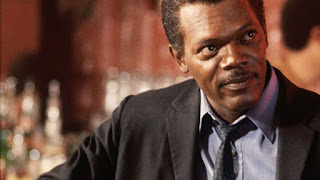 [Here's another time capsule review from 21 years ago, during my pre-blogging days.]

What do you do after you've starred in Pulp Fiction and Die Hard: With a Vengeance? If you're Samuel L. Jackson, you help produce and star in a modest $6 million 1950s African American family drama set in the Louisiana bayou.

Told from the vantage point of 10 year old Eve Batiste (Jurnee Smollett), Eve's Bayou has dysfunctional family affinities with The Ice Storm and A Thousand Acres. The movie begins at a party of the Batiste's house where we meet Eve's mother Roz (played by Lynn Whitfield in a put-upon wife role much like the one she had in Waiting To Exhale), Eve's rebellious 14 year old sister Cicely (Meagan Good), and Eve's handsome smooth-talking dad Louis (Samuel Jackson). Eve wanders off to crash in the old carriage house only to wake up and discover her dad over by the tool bench smooching with Matte Moreau, a local floozy.

Eve gasps, Louis calms her down by talking of dancing with her at the next party, and sends her off to bed. Later that night, Eve dreams of her drunken uncle getting killed in a car wreck just when the phone rings to announce that fact. In this swampy world where the men tend to be either adulterous, drunken, or dead, the women resort to their psychic abilities and voodoo techniques first to know what's going on behind the scenes, and second to enact revenge. Eve's slow initiation into the duplicitous world of adulthood parallels an increase in her psychic powers that she inherits from her Aunt Mozelle (Debbi Morgan).

In this uneven movie that sometimes sinks into melodrama, Debbi Morgan is the most consistently watchable character. With her '50s beehive hairdos and wide-eyed look, she plays the kind of lovable aunt who can drop by and tell Eve in the parlor about how her second husband got shot by her jealous lover. Mozell's psychic counselling consists of holding another women's hands and flashing onto black and white scenes of the bayou water that leads the person in question--a man injecting heroin, an unfaithful wife in bed with another man--thus deciphering the mystery her client seeks knowledge of. Since Mozelle has used up three husbands who all died in melodramatic ways, her story threatens at times to overwhelm the main plotline. I wondered how responsible she was for her dead husbands. Did she find it convenient to get rid of them? And yet she is one of the most likable characters in the movie. 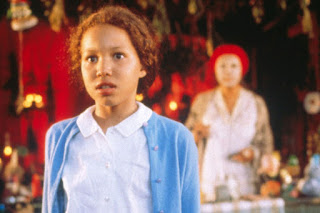 As signs and portents build up and as Samuel L. Jackson comes home later and later at night, the movie takes on a hysterical tone--too many people crying or raging, too many scenes that have to be intense. There's a big secret that I can't give away that plunges Eve's older sister Cicely into depression. In response, Eve resorts to some voodoo of her own. For instance, some wolfbane in a packet worn around your neck wards off evil. If you want to kill someone, take some of his/her hair and bury it near the family grave site in a snake's mouth.

As in the case of Angel Heart, voodoo and psychic powers give the film unexpected depth, a kind of metaphysic that steers the women through one crisis after another. Even given its problems with plotting and tone, this beautifully photographed and well-acted film stands out like cajun spice amongst the bland offerings of recent studio fare.
Labels: Eve's Bayou Samuel L. Jackson