Films I watch repeatedly (a new series): His Girl Friday 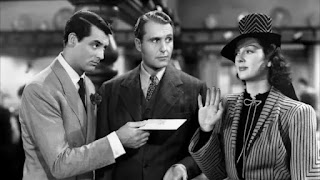 After awhile, it feels like therapy. I get out His Girl Friday (1940) or Out of the Past (1947) and watch it for some sort of undefined solace. Joseph Epstein's new book entitled Charm discusses how one can look for the movies of the 1930s and 40s for exemplars of charm, and how Cary Grant could be one on film, but not necessarily one in person (only, it seems, Audrey Hepburn could do that). Why do I love Howard Hawks' His Girl Friday so?  Let me count the ways:

1) Because it depicts a world where the much scorned journalist still had a place of importance in New York City, where one's writing ability (specifically Hildy Johnson's) mattered, where journalists cheerfully congregated around the city jail and scaffold in a grungy office, and where one's newspaper editor expected you at any moment to, under duress, crank out the lead immediately on a manual typewriter.

2) Because the dialogue was quick enough to be comparable to an auctioneer's patter, and somehow screwball comedies were born out of those heated exchanges.

3) Because of the movie's meta- moments, such as when Walter Burns (Grant) describes Bruce Baldwin as looking like Ralph Bellamy, because that's who was playing him. Also, as he also proves in Grant's breakthrough film The Awful Truth (1937), Bellamy plays the perfect dipweed.

4) Because a colleague of mine shared a theory in film class that, in actually, Hildy Johnson uses extraordinarily indirect techniques to ensnare Walter Burns even though he claims he wants her back in the first scene. (I don't really understand the theory, but it is intriguing.)

5) Because one minor character jumps out of a window in one scene, perhaps to her death, and no one particularly cares given the pressing newspaper business at hand.

6) Because the city officials such as the mayor and the police captain are naturally and venally corrupt, as a matter of course, eager to use a man's execution to further their reelection.

7) Because the three leads go off to eat three open-faced roast beef sandwiches in a local restaurant, drink coffee with a bit of liquor in it, and smoke seemingly constantly, and it all looks delightful, although I know better.

8) Because Hildy (the excellent Rosalind Russell) calls Walter "wonderful, in a loathsome sort of way," and the description suits his charmingly manipulative character perfectly. As D. Cairns points out in his video essay in the Criterion version of The Awful Truth, Grant had to experiment for years in lesser films before he found the perfect persona formula in that, and, 3 years later in His Girl Friday, Grant found a way to distill his act down to minute gestures that work wonders--the moment, for instance, when he places his hand on his chest and then points with his index finger at himself when he says "Excuse me, Madame, are you referring to me?" His supremely nonplussed (and well dressed) performance is full of these refined touches. His gestures and emphases are full of arrogance, grace, and mystery, making it worthy of many repeat viewings.
Labels: Cary Grant charm His Girl Friday