Generation Wealth, Consumerism, and the Decline of Civilization 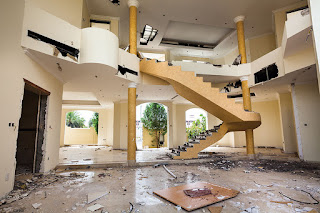 Lauren Greenfield's Generation Wealth compiles all of the director/writer/photographer's work of the past 20 years into one extended meditation on the evil effects of our consumerist/materialist culture, and I found the movie compelling when I wasn't pleasantly bothered by its bleak implications.

Greenfield likes to explore the story arcs of the lives of rappers, moguls, porn stars, Wall Street broker types, plastic surgery enthusiasts, and high level Las Vegas hostesses when she doesn't return to her roots in the Los Angeles culture that produced The Bling Ring and Bret Easton Ellis' Less Than Zero. Bret himself shows up to ask "At what price" do we worship at the feet of the goddess of financial success and conspicuous consumption?  Greenfield also likes to examine the ruinous landscapes of defunct luxury hotels in Dubai, abandoned malls, and obscenely large mansions now gone to seed after the economic downturn of 2007. She doesn't spare herself in her examinations either, since her sons like to point out that she tends to overwork at their expense. Later in the documentary, Greenfield slightly over-emphasizes the importance of family and parenting as a way to get away from self-destructive greed and our willingness to exploit ourselves as consumer objects, which leads to some sentimental scenes. Otherwise, the movie depicts a culture in decline quite convincingly. Here's my favorite quote:

"At the end of a decayed culture, we retreat into our own comforting illusions. We build walls to help with the reality around us. People have a hard time separating reality from entertainment, because there is a line. It's a thick line. Corporate capitalism pushes people in this constant search for the next adrenaline rush. People seek that momentary ecstasy to escape from a darker and darker reality. The population is diverted . . . We are dying in the same way that other empires have died throughout history. The difference is that this time, when we go down, the whole planet is going to go with us."
Labels: Generation Wealth Lauren Greenfield