Free-associating at the speed of Google: notes on video analysis 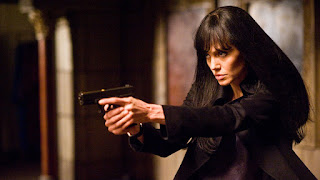 Recently, while sitting at home, bored, I came up with a what might be a new way to write (of a sort) while using the Google and Youtube search. I start with a video that I like (and it helps if you have seen a lot of movies as I have), and then I study the video's mise en scene.

For instance, take this Taylor Swift video "Look What You Made Me Do":


Swift keeps finding ways to convey a sense of her resurrections after the media onslaughts, the paparazzi, and the general mass air of criticism and vindictiveness that her fame brings down on her daily. But let's say, after indulging in this analysis, one associates this video with a zombie movie. Then, you skip over by using Google or Youtube search to something related, such as (note: this clip is a bit gruesome, so be advised):


Now, this movie raises several questions, such as why would an award-winning actress of such a caliber as Lupita Nyong'o agree to star in a slightly cheesy looking zombie film, when that whole genre seems played out?

At any rate, by following a line of thought, I allow the internet to make connections between videos and other links that would have not occurred to me otherwise. The Google and Youtube search thus becomes a kind of method for self-discovery and analysis.

For another instance, take this article by Anne Helen Petersen entitled "Angelina Jolie's Perfect Game." Petersen explores how celebrities control their own publicity nowadays by carefully releasing only the information that they want to share, thereby shutting down the gossip industry and the naysayers of the press such as TMZ.

In my internet skimming way, I link those articles to a clip from Jolie's "Salt" where her character narrowly escapes the authorities by jumping on the back of a semi:


Having let the internet basically associate the article and the clip, I can then wonder: what is the relationship between the two? Is Jolie's character's escape enhanced by the movie star's ability to escape the gossip mill through her expert manipulation of social media?

As I wrote in my mixed review of Salt: "Salt works best on one level: run Jolie run. See Jolie jump. Like Houdini slipping out of his chains, CIA agent Evelyn Salt (Jolie) eludes, evades, and outfoxes a CIA dragnet once a Russian defector Orlov (Daniel Olbrychski) accuses her of being a Russian spy. As security cameras observe her movements, she blocks them with spray from a fire extinguisher, bullets, and even her underwear, leaving her fellow agent Peabody (Chiwetel Ejoifor) exasperated and Ted Winter (Liev Schreiber) saying "Get your panties off the camera." Is Salt a Russian agent? Will she kill the Russian president in the midst of the U.S. Vice President's big funeral in a cathedral in New York City?"

Being a movie star, Jolie is extremely good at appearing as if she's not on camera, but still one can wonder about the correlation between the movie scene and the media skills that Jolie demonstrates in Petersen's article.

How much is movie stardom a matter nowadays of controlling one's media image? At any rate, I find I like free-associating on the internet, often with videos and Twitter where one keep a record of one's random thoughts. You can move quickly, thinking this way, and it helps you avoid the algorithms of Facebook and other social media sites that binds your internet experience to their agendas (I enjoy refreshing the Youtube feed just to get an idea of how evil and limited their algorithm is). This method has the potential to make link lists semi-intellectual. Thinking with data engines can also lead one to some interesting insights for free on a dull day.
Labels: Angelina Jolie Anne Helen Petersen Google internet thinking writing