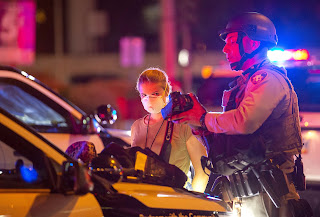 ---"9 Instances of Excessive Force"
---"The various layers of armor, mechanization and remote operation that we see today alter the relationship between police and protesters from one of the police as neighbors who are defending communities to something that, fairly or not, begins to look like an impersonal army of occupation." --from "It Really Is Different This Time"
---(Fear of a Brown Planet) Reverse Racism by Aamer Rahman
---"The police largely see themselves as the designated and heroic protectors of a particular kind of social order, one that’s rooted in racial hierarchy and the ownership of property, but which isn’t defined solely by either one." --from "Police, Social Order, and Exemplary Violence" by Patrick Wyman
---Storm Troopers
---"Experts on crowd control say kettling is a technique the police have used for decades, not just in New York City, but around the world, including Northern Ireland. In theory, officers surround protesters, cutting off exits until they tire, then let them disperse in small groups.

But because demonstrators have nowhere to go, the maneuver often ends with a charge and mass arrests. Since the city put a curfew in place this week, the police have used the technique in Brooklyn, Manhattan, and the Bronx.

'Kettling is basically when you take the crowd and drive it into a box, which is a great idea if you’re wanting to capture people,' said Dennis Kenney, a criminal justice professor at John Jay College of Criminal Justice. 'It’s generally a way to greatly increase the likelihood of conflict.'" --Ali Watkins
---"Many Americans struggle to be anti-racist, to see the racism in racial disparities, to cease blaming black people for disproportionate black disease and death, to instead blame racist power and policy and racist ideas for normalizing all the carnage. They struggle to focus on securing anti-racist policies that will lead to life, health, equity, and justice for all, and to act from anti-racist ideas that value black lives, that equalize all the racial groups in all their aesthetic and cultural differences." --from "The American Nightmare" by Ibram X. Kendi
Labels: kettling