"Remember who the real enemy is": The Hunger Games: Catching Fire (2013) and the Propaganda of Our Media Overlords

"The spectacle is the ruling order’s nonstop discourse about itself, its never-ending monologue of self-praise" --Guy Debord 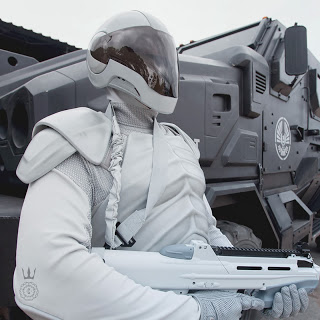 "It’s certainly strange that a blockbuster film that raked in $158 million on its opening weekend revolves around a storyline about people in power actively shaping media to appeal to our sensibilities in a way that maximizes profit and marginalizes dissent." --Sarah Mirk
“Your job is to be a distraction. Your job is to smile, to read the cards that Effie gives you, and to live happily ever after.” --Haymitch Abernathy (Woody Harrelson)

"Donald Sutherland wants to stir revolt. A real revolt. A youth-led uprising against injustice that will overturn the US as we know it" --Rory Carroll

Commodified revolt, the situationist spectacle, mass distraction--these things kept flashing in my mind when watching The Hunger Games: Catching Fire. As an installment of a popular franchise written by Suzanne Collins, Catching Fire is unusually adept at calling attention to its meta-commentary on media manipulation. The movie allegorically telegraphs its simulacrum phoniness in ways that struck me as almost realistic. It makes one wonder: who are our media overlords? How much is our information flow controlled? Let me point out some of the ways in which the movie rings true:

1) the growing disparity between the rich and the poor--This weekend in South Carolina, fast food workers in Charleston went on strike for a higher minimum wage. As a new study finds, "The wealth gap between the top 1% and the bottom 99% in the U.S. is as wide as it's been in nearly 100 years." In its dystopic way, the filmmakers of Catching Fire scarcely need to emphasize that point.

2) commodified revolt--businesses take the frustrations and the gestures of youthful revolt and convert them into commodities, thereby profiting from and nullifying the original impulse in the process. Catching Fire embodies this process unusually well. One can think of the entire hipster phenomenon of slacker dudes with beards drinking craft beer as a passively pseudo-rebellious lifestyle sold back to the young for emulation.

3) distraction--why worry about the injustices and the cruelty of American foreign policy (the drone strikes on Pakistani villagers) or domestic policy (insidious new political agendas concerning reproductive rights) when we can be more concerned with Kim Kardashian's weight loss or the current headline on TMZ.com? Katniss and Peeta understand all too well their function as distractions for Panem.

4) news and the spectacle--Catching Fire encourages the viewer to wonder how much of our media is governed by amorphous entities who promote and craft their versions of reality for us. Every news source has a bias, so that you have to compare and contrast them in order to get a vague fix on what happened. Given all of these slants, we turned to social media like Twitter to find out, for instance, how the revolution was going in Egypt because that more individualized source appeared to be the most honest. Occasionally, a crack in the organized spectacle of the media might appear in the form of the Occupy Wall Street phenomenon, but that was quickly shut down by riot police just like dissent is squelched by the jackbooted Stormtrooper-esque "peacekeepers" of the Capitol in Catching Fire.

5) Roman decadence--my significant other enjoyed the campy fashions of the rich Capitol public relations people such as Effie Trinkett (Elizabeth Banks, who at one point wears a butterfly dress that serves to emphasize how disconnected from nature the city-goers have become). The chariots, the tribute parade, the display of fascist power, and the gladiatorial fights themselves all cheerfully connote Roman depravity. Just as the Romans had vomitoriums, so do the Capitol parties include beverages that will provoke throwing up so that one "taste everything." All of this triumphal imagery suggests how America is a similar empire in decline, and that so much power requires repressive crackdowns on the increasingly poor populace to maintain a semblance of control.

6) the crackdown--part of the fun of Catching Fire's use of Katniss' limited point of view (mostly during her Victor's Tour with Peeta (Josh Hutcherson)) is that she only catches glimpses of the insurgency and the increasingly oppressive measures of the state to clamp down. She manages to peek at footage of rioting in the other districts and she directly witnesses a new invasion of "peacekeepers" taking over her own District 12 who flog and execute rebels in the main square, conduct random search and seizures, and finally firebomb the citizenry as needed. Catching Fire revels in the increasing cognitive dissonance between the happy talk of the grotesque Entertainment Tonight official media show (with Stanley Tucci's slimy Caesar Flickerman consistently stealing every scene that he's in) and the vicious crackdown going on. As Katniss' rebellious gestures continue to inflame the populace, Coriolanus Snow (Donald Sutherland) and Plutarch Heavensbee (Phillip Seymour Hoffman) seek to use their media overlord powers to equate Katniss with oppression, and thereby diminish her appeal. As Heavensbee says, “What dress is she going to wear? Floggings. What’s the cake going to look like? Executions.”

7) nature--Katniss attracts followers due to her self-reliance, and the disconnect between pure nature (the wild forbidden countryside where she learned to hunt) and the artificial nature of the Games creates a space for her to excel. The rulers of the Capitol do not want people to experience nature because that would give them the opportunity to be self-sufficient. As a professor friend of mine said, "In many dystopian novels, the protagonist looks to nature to thrive. Totalitarian regimes seek to keep people dependent."

8) the self-reflexivity of it all--just as the citizens of Panem live vicariously through Katniss' struggle as they watch her on their hologram screens, so does the movie comment ironically on its audience doing the same. Like other forms of detournement, Catching Fire teaches us to question the message in the medium. Do not believe what I'm writing. Beware of the official story. Remember who the real enemy is.