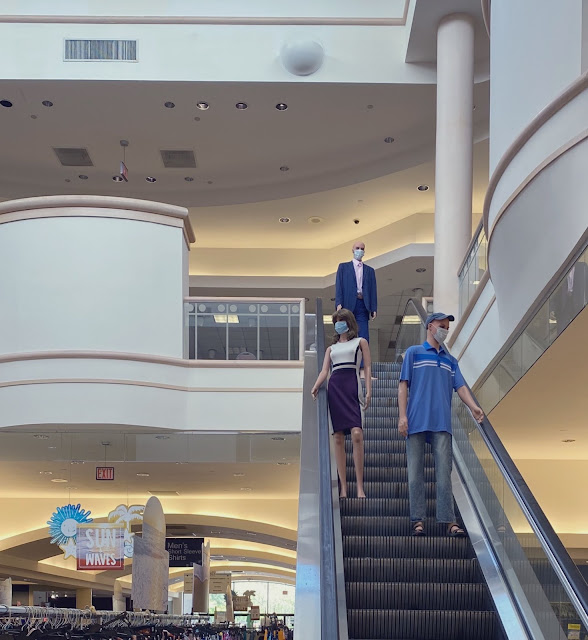 ---"The general pattern of collapse in this new century is implosion from the bottom up. The bottom is chewed through, eviscerated, eaten away, depleted — until nothing is left — by the top. The middle therefore buckles and breaks. The top caves in, eventually, along with it. Whether we look at societies, economies, the planet, or food chains — this pattern of collapse is what seems to characterize now. Of course, I am only speculating, thinking out loud. You are welcome to disagree if you like. But I wonder if you don’t see a tiny grain of truth in what I am observing, too. The bottom is shredded — the middle falls in — the top implodes. Ravaged and depleted, the whole system, chain, organization collapses." --from Umair Haque's "The Age of Collapse"
---trailers for The Devil All the Time, I'm Thinking of Ending Things, The Batman, and On the Rocks

---"Almost as soon as he stopped speaking, Trump launched his first assault on fact-based reality, a long-undervalued component of the American political system. We are not a theocracy or a monarchy that accepts the word of the leader or the priesthood as law. We are a democracy that debates facts, seeks to understand problems, and then legislates solutions, all in accordance with a set of rules. Trump’s insistence—against the evidence of photographs, television footage, and the lived experience of thousands of people—that the attendance at his inauguration was higher than at Barack Obama’s first inauguration represented a sharp break with that American political tradition. Like the authoritarian leaders of other times and places, Trump effectively ordered not just his supporters but also apolitical members of the government bureaucracy to adhere to a blatantly false, manipulated reality. American politicians, like politicians everywhere, have always covered up mistakes, held back information, and made promises they could not keep. But until Trump was president, none of them induced the National Park Service to produce doctored photographs or compelled the White House press secretary to lie about the size of a crowd—or encouraged him to do so in front of a press corps that knew he knew he was lying.

The lie was petty, even ridiculous; that was partly why it was so dangerous. In the 1950s, when an insect known as the Colorado potato beetle appeared in Eastern European potato fields, Soviet-backed governments in the region triumphantly claimed that it had been dropped from the sky by American pilots, as a deliberate form of biological sabotage. Posters featuring vicious red-white-and-blue beetles went up all across Poland, East Germany, and Czechoslovakia. No one really believed the charge, including the people making it, as archives have subsequently shown. But that didn’t matter. The point of the posters was not to convince people of a falsehood. The point was to demonstrate the party’s power to proclaim and promulgate a falsehood. Sometimes the point isn’t to make people believe a lie—it’s to make people fear the liar." --from Anne Applebaum's "History Will Judge the Complicit"

---"We’ll see how studios and chains navigate more flexible windows, but here’s what we might expect: Some chains will need to accept movies that are going to VOD. Some movies will hang on for a while. Others won’t. Fewer movies may be released. Filmmakers will aim for the best theatrical option — but sometimes, that option won’t exist." --from Anne Thompson's "Hollywood Faces the Hardest Truth: Movies Are No Longer King"

---"Angel Heart (1987) was another descent into an allegorical hell, this one initially rated X before Parker agreed to cut ten seconds from a sex scene. Mickey Rourke plays Harry Angel, a New York detective who travels to New Orleans in 1955 to track down a missing singer. He’s been hired by a mysterious man with a not-so-mysterious name, Louis Cyphre, played with a delectable chill by Robert De Niro. 'I will always remember the scenes I did with De Niro and Mickey Rourke, from a directorial point of view, because I’ve never, ever experienced anything like it,' Parker told Sven Mikulec in 2016. 'The electricity of the two of them working together, the danger of the two of them, and the way in which a scene could be fantastic, and the way in which a scene could also be terrible if they were allowed to go off the rails. They would start to improvise, the two of them, always in these scenes, and you suddenly think, this has nothing to do with what I’ve written, so you got to drag them back to what it is. It was a great experience.'” --from David Hudson's "Alan Parker: 'There Is an Identity to My Films'"

---"As commentators of the film have observed, Children of Men reproduces a world that is, if not exactly the same as ours, then a darkened, more barbarous distillation of it. This is the main reason for its persistent and growing resonance in the cultural imagination.
Writing in 1965, the American essayist Susan Sontag described the 'satisfaction' that science fiction movies provide. They are fantasies, she wrote, 'where one can give outlet to cruel or at least amoral feelings'. But there is no catharsis or redemption in Children of Men, no time to bask in the triumph over an alien invader or from surviving environmental wipeout. The images on the screen, a collage of human debasement and moral abdication, are all too familiar as the way we live now." --from Gavin Jacobson's "Why Children of Men Haunts the Present Moment"