Escape from the Bunker 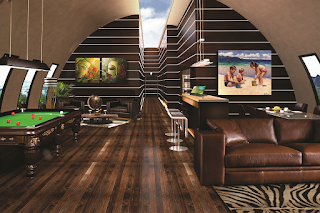 I’ve enjoyed studying films, teaching cinema, and writing movie reviews for much of my professional life, but trying to finish writing just one screenplay has proven much more challenging. Last spring, near the beginning of the COVID-19 pandemic, my 29-year-old son Wickham and I decided to start a weekly screenwriting workshop on Facebook Messenger’s video chat. Wickham teaches screenwriting among other subjects at Bilkent University in Ankara, Turkey. He video-chatted from a laptop in his high-rise apartment on the edge of Ankara while I was largely quarantined in my living room at a suburban subdivision in South Carolina. He entitled his film Scarlet and the Red, which concerns a noir 1920s femme fatale who runs a Chicago criminal empire. In contrast, my post-apocalyptic science fiction idea for a movie centers around a character’s need to escape an elaborate underground bunker named Mineshaft City before the electricity goes out. I also wanted to have my main character Grady to have a tuxedo cat that would help her along.

In the midst of all of the paranoia and the uncertainty of the pandemic, our writing workshops have been exhilarating, humorous, and annoying, in part because all of my critical strengths have often proven to be creative liabilities. We have both made significant progress in our stories, but thus far, strangely, no studio executive has greenlit my elevator pitch into a multimillion-dollar feature production.

At first, screenwriting seemed easy because much of the plot of the movie leapt into my head as the COVID19 epidemic swept over the United States, and that scenario neatly suited a science fiction storyline. My adventure story of Grady’s escape was partially influenced by Snowpiercer (2013) with its allegorical class struggle on a train, and the 1975 film A Boy and His Dog, starring Don Johnson, which includes a “downunder,” a grotesque parody of conservative American society in a bunker-like place under the irradiated wreckage of a nuclear war. My Mineshaft City has a “French” cafe with wall-sized video screens that create atmosphere, an elaborate warren of apartment complexes, and swimming pools under an artificial sun. No one in the City knows exactly what’s going on on the earth’s surface, but the ruling powers of this compound strive for the appearance of normality amidst a fascist takeover behind the scenes.

Usually, Wickham and I met for an hour once a week on our respective laptops. We compared our drafts by sharing the editing on Google Docs, but quickly I realized that screenplays need to be carefully set up to create the hook in the first five minutes of the movie, with each minute being roughly equal to one page of writing. Instead of sticking to screenplay structure, I found myself tending to write more novelistically fancy prose, with major characters pausing to philosophize about the metaphysics of Mineshaft City instead of getting on with the plot. I liked to think about my screenplay, but I had a hard time expanding it. What had once begun so easily now seemed to slow to a snail’s crawl, with me accumulating drafts, notes, and some scenes in a disorganized mass of Google Docs.

Both Wickham and I tend to be better critics of movies instead of screenwriters, and our tendency to jump on each other’s fledgling efforts concerned me, even as I understood that we were both usually making valid points. At times, my movie idea seemed too fragile to survive all of these fierce reactions. Wickham talked of the perfect narrative structure of Billy Wilder’s The Apartment or the highly efficient first shot of A Clockwork Orange. Meanwhile, I would turn back to Grady and her cat in the opening scene of Mineshaft City, and endlessly tinker with it. I still don’t know how to truly include the cat in the storyline, since it doesn’t want to behave in a way that makes much sense in suspenseful escape sequences. Perhaps the cat could smell a stairwell that would lead to the furnaces below? I sometimes became frustrated with the endless sprawl of revisions.

One day we workshopped a scene I had written where Grady, in her attempt to get away from the police, stumbled across a hospital room in a strange quadrant of the City where a man lay in a comatose state in a bed. I probably was thinking about the pandemic when I wrote this scene. A nurse shows up who suddenly takes an interest in Grady’s top secret napkin that she got handed to her just before a shoot-out in the Parisian cafe. As I wrote:

“The nurse lowers her mask and bends down to speak to Grady quickly and quietly, as if concerned about being overheard. ‘What is your name?’

‘Grady Banner.’
‘Well, Miss Banner, my name is Astra, and I am a member of the maquisards. We
must get this document to my superior immediately, for, I suspect, it contains vital
information for our organization.’”

When I read this passage to Wickham, and he realized that this utterly random nurse knew everything going on behind the scenes, he burst into laughter. Soon enough, when I realized what I had done, I started laughing too. My face turned red, and we both could scarcely stop giggling for five minutes. I had written the scene seriously enough, but it was far too easy and convenient, and Wickham wondered why I had to rush things in such an unrealistic way, as if in a hurry to get the delayed exposition out onto the page.

These kinds of critical workshopping reactions, on both Wickham’s and my part, made advancing further into the screenplay tougher.Perhaps we would do better to lock ourselves in a room, and force ourselves to finish a draft, no matter how painfully bad the final product?

I started to wonder about how other screenwriters managed this task. How do people write these things anyway--in a coffee shop on their laptop, forever revising and getting nowhere? What was I supposed to think of the young fellow with a Youtube video who claims he can finish a screenplay in a 48 hour period or less? Should I hate him as my screenplay writing process slows to a slog? I had also read The Big Goodbye: Chinatown and the Last Year’s of Hollywood recently, a book length account of Robert Towne crafting the Oscar-winning screenplay of Chinatown (1974). Towne begins his leisurely process of writing the screenplay with much research into 1930s Los Angeles, studying the history of the city’s issues with water, and locating his story within the point of view of a traditional private eye, played by Jack Nicholson. Compared to how I imagine much screenplay writing works, Towne would revise for months and then years meditatively, fine-tuning the movie’s structure throughout, and never compromising his artistic integrity for cheap effects or studio-driven marketing concerns. Towne’s artistic rigor, reflective tone, and extreme perfectionism served as an example to me of a high standard of composition.

In contrast to Towne, often I found myself slipping into bad writing habits. When given the opportunity to introduce Grady’s parents for a brief scene once the waitress is on the run from the police, I found myself writing clichéd dialogue like “That’s all very nice, dear,” with both mom and pop falling quickly into the steretotypical stupid adult roles that one often finds in teenage comedies. In contrast, the movie Donnie Darko distinguishes itself by having the parents not be like that. They tend to be surprisingly sympathetic, understanding, and likeable characters, but I always seem to find the conventional phrase and the obvious, not very funny tactic of Grady’s mother absorbed in her Animal Crossing video game, not paying attention to her daughter’s brush with death easier to write. Likewise, the father is glommed onto the propagandistic news on the flat screen TV, hardly even aware of his daughter’s predicament even when the previous scene’s bloody massacre shows up in the evening news.

When confronted with writing a complex passage, I tended to always take the easy, lazy way through it. A friend of mine, David characterized my movie as exactly the kind of thing he knows I would normally hate to watch, and there is truth in what he says. David also found that the inclusion of a “Tinder” floor on Mineshaft City, where young couples find romance, sounded like my attempt to cater to a younger audience, to sound hip, so to speak. I hoped he was wrong, but also I wondered if he wasn’t.

Through all of this struggle, I learned that world-building and original and effective characterization are all hard to make. The beginning of the movie has to set in motion characters and their goals and wants in a way that can enlist the sympathy of the viewer, who can bring a highly nuanced understanding of the different ways the plot can go. I learned that I could revise the opening scene over and over and still not be satisfied, and I could easily fall into clichés and conventions even though I hate watching them over and over in the cineplex. Lastly, creative writing can be very subtle. As someone used to reviewing movies, I carry my own critical voice in my head, often making me want to throw my laptop across the room in frustration.

I should also say that it’s invigorating, and a bit humbling to get advice on writing from my son, a person I once taught in English class. But, we persevere. We have been workshopping now for 7 months, and I can easily imagine tinkering with this screenplay indefinitely. If I cannot make it through these first few scenes my character Grady will never escape Mineshaft City. I don’t think this end would be fair to her, stuck amidst all of those conflicts and plot points, so I set up another meeting time with Wickham. Maybe by the end of 2020, I can figure out what to do with the cat.