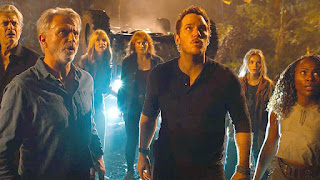 I found Jurassic World: Dominion to be exceedingly dull once I figured out that the PG-13 dinos will never harm any of the lead actors even though they must attack someone in every scene. The movie distinctively lacks dramatic focus. It resembles some sort of amusement park ride where some critter snarls or clicks menacingly as Bryce Dallas Howard hides underwater. Chris Pratt could only summon a look of mild concern for much of the movie as Sam Neill proved far more expressive (with his Australian squinting and double takes) than most anyone else.

If I were a dinosaur, I would sue Universal Studios for mucking up the species' image. Fearsome, they are not. The giganotosaurus arrives to pose snarling along with the t-rex in the jungle as the Mark Zuckerberg-esque villain of Biosyn (Campbell Scott) gets attacked by yet more critters in a subway car.

Jaws (1975) worked much better because you couldn't see the shark for much of the movie, and there's only one of them, thus the movie has suspense that creates genuine fear. Jurassic World: Dominion reassembles the leads of 5 other movies to appear semi-scared when they look up as they cower under an overturned jeep. I was mostly frightened by the thought that the movie would never end.