Jurassic Bore: A Prediction of the Infinite Forgettability of a Blockbuster 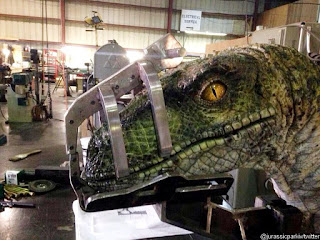 Keep them wanting more of the same.

"Chris Pratt was charming in Guardians of the Galaxy, so let's give him another look-see."

Oh, let's go watch the Indominus-Rex escape and kill. Let Chris Pratt distract the lady folk with his harmless semi-humorous hunkiness, now that he's lost weight, as he bravely faces the snarling velociraptors. Let's count on today's kids not remembering the previous three iterations of the Jurassic franchise (Jurassic Park, The Lost World: Jurassic Park, and Jurassic Park III) back around the time when they were born. Oh, it's a terrific ride, escaping devouring Spinosauruses!

Defeated, bored, I'll let this movie, plus soda ads, claim my sad attention for a couple of summer hours. I'll watch it ironically! Oh, oh, oh, that Spielbergian trope of blood dripping down during a quiet moment or water in a glass jiggling to prepare us for the next big surprise, a sneaky dino attack. Yowza! A minor Asian character just became dino-meat. Giant CGI lizards are scary and they move fast. Thousands of people on an island may die! See them run screaming from the fast and mean raptors. Bring in the paramilitary forces. Pratt zips by on a motorcycle in a tracking shot with a small band of rough-and-ready survivors with their helicopters and machine guns. Will he save Claire Dearing who is frozen with fear, standing with her flare in the dark and the heat? It's summer time and you're bored and you demand your human ripped flesh, CGI sacrificial spoils, a fast food media dinner for the supremely entitled.

No one cares about the pans from the many Rotten Tomatoes critics as the popcorn-crunching crowd shoves in to see today's distraction from the overheated complacent summer, today's blood sport, as the American empire sags and forgets itself and its drone bombings, its futile wars in the teens of the 21st century, a period of never mind the ever-heating atmosphere, the droughts, the mass killers seeking attention and the ever-receding Amazon jungle as the flipflop-wearing corpulent crowd in t-shirts and shorts rides the amusement park replacement for nature, a spectacle designed to draw your eyes to the grey fuzzy computerized fakery of large evil lizards. As another audience member, you kind of like it insofar as you remember it at all. Some of Pratt's jokes were funny. You liked that one scene. Afterwards, you walk out to the sun and the heat of the cineplex parking lot and check your phone for updates of pans of other blockbusters as you wait in traffic until you get home to another form of amusement on another smaller screen. 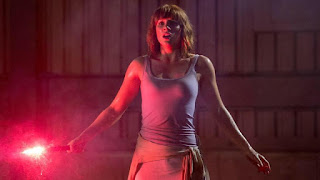 Have you bought the LEGO video game version yet? I will ultimately be too oppressed by the loud bludgeoning of the munching, slamming, crunching visuals to want to review it. Enjoy the latest bodies primed for the slaughter. Dino-jaws masticate as two screaming tourists have been taken up by a pterodactyl into the jungle. Hear the tourists' distant screams.
Labels: Jurassic World

DeadSpiderEye said…
Personally, I prefer the Godzilla flicks, you know the real ones? Unfortunately I can never distinguish them properly, their names are all: Godzilla does this, ... eats that, vs however. There are a few stinkers amongst them but I always think of 'em of fondly, even if they don't end with that location shot with a kid waving at Godzilla as he does a Shane into the sunset.
June 2, 2015 at 7:49 AM

The Film Doctor said…
I didn't care much for last year's Godzilla. Perhaps I'm wrong about Jurassic World? After Fury Road, is there anything worth seeing this summer? I wrote this pre-review based on the grim sinking feeling I got from the Jurassic trailer. Doubtless, The Fantastic Four reboot will make everything all better. Mission Impossible: Rogue Nation will save us all.
June 8, 2015 at 9:05 AM

Unknown said…
Still looking forward to seeing this one. It's been a long time since I saw a Jurassic Park movie in theaters.
June 8, 2015 at 10:54 PM