8 notes on the deplorable, seductive aesthetics of Francis Ford Coppola's The Godfather (1972) 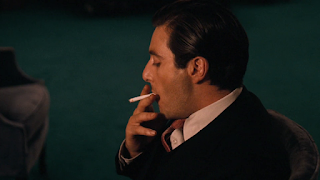 When someone pointed this out about the female characters of The Godfather, I readily agreed, acknowledging that it related to Sicilian culture and the prevailing gender dynamics of the 1940s, but the observation still irks me because The Godfather is still one of my favorite films. Does it cater to some underlying sexism in its male viewers? Some spoiler-filled notes:

1) Michael Corleone can only pay lip service to the tradition that stresses the importance of a man spending time with his family, since he lies to his wife and sister. Those relations with the women are collateral damage, easily dispensed with.

2) It's easy to admire Michael's character arc. He kills Captain McCluskey and Sollozzo. Later, he arranges for others to kill for him. The viewer still likes him anyway, since it is all strictly business, and it is intriguing to watch how he assumes and holds on to power even as the movie illustrates how his brother Santino's weaknesses cause him to lose it. Michael was a war hero before. Now, Michael has shifted his killing techniques, using smaller, efficient, more focused operations.

3) One likes Michael, in part, because he's got zero time for or interest in the Las Vegas showgirls placed before him by his brother Fredo. Fredo is corrupt and weak due to how quickly he accepts Moe Greene's power over him. He allows that to happen perhaps due to the pleasures of the job in Moe's casino.

4) Meanwhile, after his extended stay in Sicily, Michael just gets cooler and cooler because he knows that he can kill off all of his enemies in an upcoming ironic baptism montage featuring Sofia Coppola, oddly enough, as the baby. That scene will, as he puts it, "take care of all of [his] problems." All that will remain will be the perfunctory lies to his wife and sister, hardly worth worrying about.

5) Meanwhile, the movie programs the viewer to accept Santino's death just as most everyone who dies in a bloody fashion appears to deserve it. Santino's gory riddled-with-bullets machine gun death is perhaps better motivated than the equivalent scene in Bonnie and Clyde (1967).

6) By the end of The Godfather, Michael has become a cheap loathsome hood who snarls at Diane Keaton, but I don't care because of the way the entire movie seduces me to like him even though I should know better. He's so smart in his villainy. When Michael says "I'm with you now," to his father Vito, he technically loses his soul, but soon enough the viewer is far too impressed with his cool bluff before Sollozzo's hoods in front of the hospital to care. Michael calmly notes that his hands don't shake as he handles the Zeppo lighter of the freaked out baker. What makes that scene effective is the way Michael's realization, his cool under fire, matches the viewer's. He looks at his hands. "Hmmm," he says to himself. "I'm not nervous at all." That subtle gap between the action and the observation of the action makes Michael such an compelling figure. We see him observing himself, assume the reins of the family's power, and he recognizes how that power is in part a front, a bluff (just as he bluffs Sollozzo's men by placing his hand in his coat as if he has a gun). For Michael, power is a manner of being that sits and considers its next move long in advance. He's self-aware of the corruption of power. One can imagine him highly conscious of how it will likely all play out in advance.

7) Still, as much as I like to imagine Michael as the unmoved mover, he snarls at Kay by the end of the movie. Even as he lies to her despicably, he's still the object of worship with his minions bending down to kiss his hand as the door shuts in her face. The door shutting alludes to the endings of both On the Waterfront (1954) and Notorious (1946). 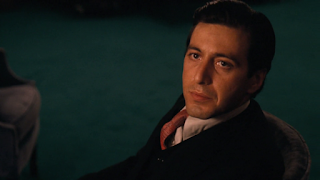 8) Meanwhile, The Godfather provides us with a study in different ways to shoot a garroting scene. The earlier one, in which Luca Brasi dies, displays the advantages of stabbing your victim in the hand, pinning him to the bar so that he can't do much except writhe and bug out his eyes as the garroting gangster slowly lowers him to floor.  The later garroting of Carlo is part of a larger investigation into ways to incorporate broken glass into a murder (a cinematic tradition that stretches back to the eyeglass breaking scene in Eisenstein's Battleship Potemkin (1925)). Carlo's kick through the front windshield of a moving car as he's being garroted surprises the viewer as if he had just kicked his way through the movie screen. His death is the climactic one soon after the ironic baptism montage that explores so many ways to have people die through or behind glass. Moe Greene's death is an explicit homage to Potemkin, since he's shot through one eyeglass. Also, Barzini gets shot way up high on some steps outdoors, so that when he rolls down he provides us with another homage to the Odessa Steps scene. With so many classy ways to kill people, The Godfather can thrill with its gore even as it appeals to the film scholar's knowledge of cinematic history.
Labels: The Godfather

DeadSpiderEye said…
I like the quote, it reminds me of a joke:-

'This screenplay needs more bonnets and can we find a role for Stephen Fry?'.

Not one of mine, I hasten to add, I would never be so cynical.

The Film Doctor said…
Still, it feels weird to realize that one of your favorite movies poorly characterizes its female characters.

I also like spotting the Psycho references. At one point, Clemenza discusses exterminations just before Pauley gets killed, a reference to Hitchcock's bug extermination joke right after the death of Marion Crane?

There's nothing like a film that keeps making film classic references in the midst of being entertaining.
May 26, 2015 at 10:31 AM

DeadSpiderEye said…
Well it's like this Doc, I think faith in an author's vision takes precedence over expectations. Imagine receiving a treatment from Garcia Lorca and saying, "Can we make Pepe a speaking role?". As it is, I would argue that sexual dynamics are intrinsic to the tale, Michael has a woman, who he's had no contact with, casually murdered out of sight for no greater motive than personal convenience. There's also that segue, Vito's revenge, where he discharges his victim's viscera, played against Michael's confrontation and the revelation of his son's, 'murder'. Michael's relationship with Kay, is characterised by his peremptory attitude towards her and his focus on his own sovereignty. Something he pays for when her volition is revealed. If you wanna throw Ma Baker into that cauldron fine, but I think you'd be missing something.
May 27, 2015 at 7:56 AM

The Film Doctor said…
Perhaps so, but viewers today expect stronger female characters, so when Vito's daughter, Connie, proves such a helpless figure, beaten up by her husband, all she can do is complain when her brother has her husband killed. Given the strengths of Vito and Michael, she seems to come from a different family. That aspect of the movie ultimately dates it, even given your faith in Puzo's and/or Coppola's vision, and taking into account the severe gender regimentation of the Sicilian family traditions. Isn't it ironic that Mario Puzo took many of the Corleone family code ideas from his mother? Yet, Michael's mother hardly appears in the film.
May 27, 2015 at 10:00 AM

The Film Doctor said…
Here's the article where I learned about Puzo's mother:

"Whenever the Godfather opened his mouth," the author later wrote, "in my own mind I heard the voice of my mother. I heard her wisdom, her ruthlessness, and her unconquerable love for her family and for life itself, qualities not valued in women at the time. The Don's courage and loyalty came from her; his humanity came from her."

DeadSpiderEye said…
Thanks for the link, I think I'll be looking up a copy of Pilgrim in the near future. One of the interesting things about the quote, is his quip, '...qualities not valued...'. I think he's alluding to the disparity between -cultural- life and actual life, life as depicted in fiction is subject to morals or idealogical impositions that are necessarily simplistic. Life as endorsed thirty years ago in the templates provided by cultural entities, was as fictional as the one we have now, except that the influences on those templates were in the process of being undermined, whereas today new constraints are being reinforced. So yeah, you might have a point about him deliberately overlaying a gender filter upon his characters, there is certainly an imbalance compared to reality. If that were the case, I'm not convinced he didn't select to do that other reasons myself, I think I would frame it as imposed by cultural expectations, rather than cosseting the prejudice of his readers.
June 2, 2015 at 7:37 AM