"Denying her wounds came from the same source as her power": a review of Wild 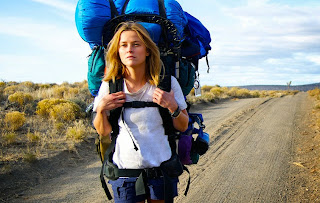 Wild is earnestly made. Reese Witherspoon suffers enough on camera (perhaps just as much as Jennifer Aniston does in Cake?) to make her performance Oscar-worthy. I've not read the original memoir written by Cheryl Strayed, but it works as a quest narrative. A young woman seeks to cleanse herself by hiking the Pacific Crest Trail after greatly debasing herself (promiscuity, heroin) after losing her mother to cancer. As Cheryl (Witherspoon) walks slowly through the desert, she must learn to lighten her "monster" pack (a characters in its own right), reflect on her earlier errant ways through many flashbacks, and perhaps learn to accept herself with proper epiphanic force by the time she arrives in Washington state.

Wild conveys well the quirky things that can happen to you while camping. Every man Cheryl meets seems like he could be a potential rapist; one journalist on the highway treats her as a hobo whose lifestyle might be fodder for The Hobo News (as much as she denies it). She meets a fox, a llama, frogs who jump up on her sleeping bag, a strangely polite singing child, and some Oregon cows. She learns of the importance of properly fitting hiking boots in the midst of providing REI with dream product placement. Also, Cheryl gives the movie a literary kick whenever she writes a quote from Emily Dickinson, Adrienne Rich, or Robert Frost on the trail register. For example, she writes "If your Nerve deny you - Go above your Nerve" by Dickinson.

I have much respect for Reese Witherspoon's talents as an actress (especially in Election (1999)). Here her character displays a monastic desire to atone for her various sins (aside from Cheryl's, one could also throw in Witherspoon's decision to star in This Means War (2012)). Instead of wearing a hair shirt in the wilderness, Cheryl allows her heavy pack to scrape up her body, and she suffers through days of eating cold mush when she can't get her propane stove to work. Still, I can't help finding something programmatic in the way that these bestselling memoirs, these packages of uplift demand that the protagonist reach the very lowest of the low (heroin stupor, sleeping with the dealer in a hovel, disposing of her mother's horse, etc.), before she can redeem herself with the picturesque Three Sisters mountain as a backdrop. This memoir convention necessarily leads to depictions of extremely unethical behavior because where's the interest in only partially going wrong when the reader can vicariously enjoy the memoirist's total debasement and self-loathing?

Also, I was not pleased with Laura Dern's portrayal of Cheryl's flaky, life-affirming earth mother Bobbi, something of a type who fights to affirm her children (Cheryl and her brother Leif) in the face of an abusive alcoholic husband, cancer, and so on. When Cheryl confronts her mother's relentless positivity given their extreme poverty, Bobbi replies "We're rich in love." At another point, Cheryl shares with a fellow camper this quote from her mother: "There is a sunrise and a sunset every day and you can choose to be there for it. You can put yourself in the way of beauty." In the midst of these cheesy affirmations, I could only think of Dern's excellent work in the decidedly bleaker movies of David Lynch.

[To all of this, my wife replies . . . ] There's a reason why the mother is portrayed this way, in spite your unflinchingly patriarchal desire to demean her. The movie is based on a memoir. Whenever we choose to remember our positive influences who are no longer with us, we over-positivize them. Strayed's mother becomes Christ-like after her death because she has to be. The mother becomes the religion that Cheryl adopts only after losing her. If the mother stayed alive, she would be filled with idiosyncrasies and problems. You deify people who have left you, because you can. Cheryl's whole goal, the whole point of the movie is that she wants to become the daughter that her mother had raised. She needed the wilderness as a place to grieve the loss of her mother, and allow her memories of her mother to bring her joy. Her mother is always going to be larger than life, and be probably not very cinematic as a result. Laura Dern can't possible play somebody that grand. It's not Dern's fault. It's not the memoir's fault. It's the nature of death and grief. 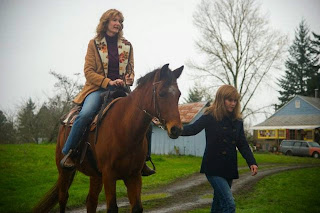 I do agree, however, that the memoir as a genre has conventions in which the reader is invited to vicariously share in extreme behavior. This form has been around since the captivity narratives during the Puritan era, and they depend upon on extremes to be successful. However, at their core, these narratives have one person's story about how to live in this world. The best ones force us to examine our own way of being. By handling the excesses of her behavior in flashbacks, the movie Wild skillfully allows Cheryl to spend most of the film time in learning how to be herself, to regain her humanity. The wilderness allows her to enliven her senses again.

As Thoreau wrote [I reply], "In wildness is the preservation of the world."

silvergirl said…
As I began reading your review, I had already accepted that this would be a review by yet another white male about a movie that has deep meaning for women. I had almost chalked it up to another dissing of a "chick flick" so predictable in these reviews, but then you quoted your wife's observations. Male white reviewers are capable of redemption after all.
September 26, 2015 at 8:35 PM

silvergirl said…
And one more thing. You appear skeptical about men who meet lone women on the trail being a potential threat. They are. Every one of them, until proven otherwise. Spend one week as a woman on a trail or camping and see how long it takes before you feel threatened. It won't even take that long.
September 26, 2015 at 10:13 PM

The Film Doctor said…
Thanks for your thoughts, Crystal. My wife appreciates your point about her observations about Wild, and I could tell that my understanding of the movie may be limited by my male reading of it. I didn't mean to make light of random men encountered on the trail being a threat. Cheryl's understanding of that risk makes perfect sense given her isolation out in the wilderness.

Ironically, I was just thinking of Wild after watching the trailer for A Walk in the Woods, which looks like a lame retread of Wild for older men (or male stars) seeking meaning in slightly canned adventures. How Robert Redford would agree to be in such a formulaic movie strikes me as sad, but then again I haven't seen it.