Blindness with a needle and thread: the delightful menace of Coraline 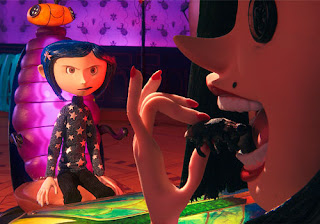 Others can talk about the genuine feel of 3-D stop-motion animation, but what I liked most about Coraline was its sustained air of menace. Forced to live in a rundown house converted into apartments on the edge of nowhere, blue-haired Coraline already has to contend with parents too wrapped up in their writing on the computer (a pitch-perfect satire of obsessive bloggeritis) to have any time for her. The apartment complex is full of decaying showbiz queens and Mr. Bobinski, a European emigree trying to set up a mouse circus when he's not doing calisthenics on the roof, so one can scarcely blame Coraline for wanting to escape.

When she happens upon a Secret Garden-style doorway that leads to an alternate, more cheerful variation on her house one evening, things start to become strange. She stumbles upon a sit-com mom fixing a much better turkey dinner for her and a more fun-loving version of her dad. After they eat, her "dad" leads her out to the garden where the flowers perform for her. Later, she sees a perfectly choreographed mouse circus. Everything is a show, but something is wrong. Everyone in this universe has buttons in place of eyes, and they would love for her to stay if she would just substitute her own eyes with buttons ("Black is traditional" says the new mom). When she resists, the new "mom" places the small box containing the buttons and a needle and thread reproachfully on the dining table. Even more, she never fully explains what Coraline is supposed to do. Tear her eyes out Oedipus-style? Sew her eyes shut? Other questions also arise. Why can't the alternate version of her friend Wybie talk? Why does he wear that fixed, ghastly smile? Did the alternate mother just say she had to have him "fixed"?

Not since Pinocchio got lost on Pleasure Island has a character been thrust into such a falsely chirpy world where all of the "delights" increasingly hint of puppets living in despair under a puppeteer's lash. Coraline sets its mood brilliantly in the opening credits when two metallic hands grab a doll from the night sky and quickly dismember it, take off its button eyes, unstitch its mouth, throw out its innards, and then refashion it into a reasonably close variation of Coraline, complete with blue hair. The metallic needle hands have a fierce, practiced air to them, suggesting that they are used to killing children and then manufacturing artificial copies of them stripped of all personality or individual resistance. With nightmare logic, the film shifts from neglectful, work-obsessed parents straight out of Dalton Conley's new book Elsewhere USA to new "parents" who prefer forced affection in the midst of Disneyfied happiness to anything genuine. Ever wonder how it might feel to be obliged to smile all day as an employee at Disney World? When Coraline starts to resist her new "mother," she's thrown into a haunted closet, where she hears her new "mom" saying "You may come out when you learn to be a loving daughter!"

When it's not exploring the concept of the family as trap, Coraline calls attention to its own participation in socially-engineered, pseudo-happy, mediated worlds of endless distraction, all of it designed for children who will grow up to become equally distracted adults who inhabit grotesquely mediated worlds of their own. We all run the risk of going blind, the film suggests, and become "fixed" with age, losing our identities in the process. In its playful way, Coraline strikes me as grimly accurate.
Labels: Coraline

Richard Bellamy said…
Your review is excellent; I really enjoyed your analysis of the nature of families today.

I saw Coraline last night and it definitely was unlike anything I have ever seen before - and I've even seen the bizarre The City of Lost Children. It definitely establishes a "sustained air of menace." Even the "real" world is menacing. It's a very scary movie; I think little kids would be really freaked out - or maybe they've seen so much they won't care. It was very creepy when the "other" world goes all white and crackly and when the witch turns into a spider and chases Coraline up the spiderweb to the tunnel.

Perhaps the weirdest scene (like something out of a fever dream) was the one in which the two hugely buxom ladies perform their songs practically naked and then zip open their outer guises to reveal trim young girls.
February 10, 2009 at 8:17 AM

Anonymous said…
Ditto on your astute discussion of families as well! I saw this with the "family" on Friday and am presently reading Neil Gaiman's recently-annointed Newbery winner THE GRAVEYARD BOOK, which expectantly showcases some of the eccentricities and sensibilities of the earlier work, which translated engagingly to the screen, despite it's being oddly (emotionally) distancing.
My wife loved CORALINE, the kids liked it, and I am somewhat closer to their sphere on it.
Thought-provoking piece here.
February 11, 2009 at 8:02 AM

I agree with you about the buxom ladies scene. What is it? Some sort of parable about grotesque showbiz aging in reverse, a dream sequence commenting on Benjamin Button? At any rate, I like the way the film is full of odd details that resist analysis.

Thanks for your thoughts. There have been many times when a family member needed me and I said, "Not now! I'm writing!" as I sat lost in contemplation at the laptop. Coraline makes you wonder how much this has become a universal condition. Coraline's parents are not evil, but they do seem to be terminally distracted.
February 11, 2009 at 10:36 AM