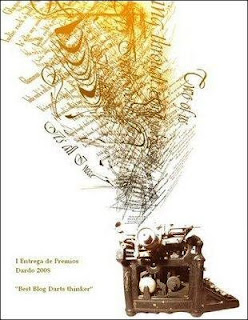 “The Dardos Award is given for recognition of cultural, ethical, literary, and personal values transmitted in the form of creative and original writing. These stamps were created with the intention of promoting fraternization between bloggers, a way of showing affection and gratitude for work that adds value to the Web.”

Over the weekend, I was pleased and honored to learn that Ibetolis of Film for the Soul awarded me the Premio Dardos Award. Later, Jason Bellamy of The Cooler did the same.

I humbly and gratefully accept this award and now pass it on to some of my favorite film bloggers (some of whom have already won a Dardos):

2) Dan North of Spectacular Attractions, always an impressive blog, both in terms of design and scholarship.

3) Alexander Coleman of Coleman's Corner in Cinema, one of the best written, period.

4) Movieman of The Dancing Image, one of those intimidatingly good blogs.

5) Ed Howard of Only the Cinema, an ever-thoughtful and thorough blog that sets the standard for excellence.

Recipients are supposed to do the following (if they haven't done so already):

1) Accept the award by posting it on your blog along with the name of the person who has granted the award and a link to his/her blog.

2) Pass the award to another five blogs that are worthy of this acknowledgment, remembering to contact each of them to let them know they have been selected for this award.

Lastly, much thanks to Wendymoon of Movie Viewing Girl, who honored me as part of her post "Do awards matter?" over the weekend.
Labels: Awards

Keep up the excellent work here. I'm enjoying your pieces, both "old" (but not to me) and brand new.

Joel Bocko said…
Thanks, FilmDr...if I do take up the challenge I will probably cop out and select those who haven't been picked yet (though as the award spreads, that's getting harder to do). Keep up the good work, though - I enjoyed your video class series too by the way though I caught up with it kind of late.
February 11, 2009 at 4:20 PM

T.S. said…
I agree with the comments above – how can I not? Your site is great, your features are specialized yet engaging, and your writing is always something to look forward to when it shows up in the reader.

I'm looking forward to reading and conversing with you throughout 2009. Congrats on yours, and thanks for the kind words.
February 11, 2009 at 10:08 PM

Anonymous said…
And to add to what the other said you are humble, gracious and exude an effervescent personality.

Incidentally, I don't know the second blog you mention, but Alexander, T.S., MovieMan and Ed Howard are truly fantastic sites by any borometer of measurement, as is your own.
February 14, 2009 at 12:56 PM

The Film Doctor said…
Much thanks, Sam, although one can scarcely compete with you in terms of being gracious and generous. Every time you write comments, I take notes.
February 15, 2009 at 9:04 AM

Anonymous said…
Thankyou for the vote of confidence, Doctor. I'm humbled by this accolade. I'd belying if I said I hadn't written a version of this comment before, but that was when I was a little boy in front of the bathroom mirror. I'd like to thank the Academy... etc.

Keep up the good work of improving the level of discourse in the blogosphere, doc. Since I started reading and writing around here, I've learned so much - I just wish I could keep up with more of them more often.
March 11, 2009 at 6:25 AM

The Film Doctor said…
Thanks for your kind words, Dan. I enjoyed your recent post about one of my favorite movies--Kind Hearts and Coronets. In comparison to my snarky little reviews, your blog has a bracing thoughtfulness and complexity.
March 11, 2009 at 7:42 AM