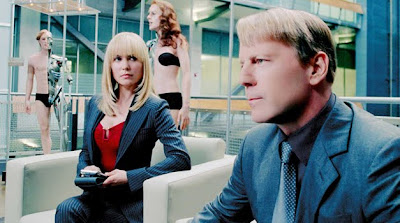 ---The war between the shot and the snatch.
---American civil liberties in action?
---Scott Schuman of the excellent Sartorialist gives tips on how to succeed.
---Disturbing tech videos ads.
---In apocalyptic news, predictions of the end that didn't pan out, Zombie CNN, and the enviropocalypse.
---Truth be told, Surrogates was a letdown, a good example of the new dystopian banal (so many apocalyptic movies, so little time), so I haven't written a post about it, but if I were to do so, I would mention how robots do not make good actors, how Ving Rhames looks silly as the pseudo-Rastafarian Prophet, how the film's big scene sadly evoked The Happening, and how the movie vaguely resembles an oddly earnest Pulp Fiction reunion. Then again, the film does reflect how social network use has tripled in the last year and how people increasingly spend 8 hours a day in front of some screen or another. According to Cinematical's interview with Surrogates director Jonathan Mostow,
"Cinematical: What is the point of the surrogates for the people in this film? How does it revolutionize their lives?

Jonathan Mostow: It's not so much that it revolutionizes their lives. It's just kind of like it's the extrapolation of where we're going, which is more and more we seem to be able to do stuff through our computer and online. Like right now, you can stay in touch with all of your friends via email or Facebook or Twitter; you can get all of the information in the world from AP.com or NewYorkTimes.com, whatever. So the only thing you need to leave the house for is to go to your job, and if you really wanted to socialize in person with somebody. What if there was a machine to enable that to happen as well? Where we're going with robotics and this whole new developing field of brain stuff, it feels like it doesn't take a lot of speculative science-fiction to imagine we could sort of get there. This movie isn't really asking the question, gee, if in the future this technology existed, what would actually happen?

Surrogates is really a metaphor for asking the question, today, right now, we live in a time where we are swamped with all of this technology; we love it and we're addicted to it, but we also can't let go of it. What's that doing to us as human beings? That's really kind of to me what this movie is fundamentally about, so the appeal to people of having a surrogate is extrapolating out where we're already at. We're all constantly seeking convenience and a better existence, so if you can live with a surrogate, you have no personal jeopardy, moral boundaries are conveniently erased, and you also just feel better. It's why video phones never took off; there have been several iterations of video phone technology, and they never took off because ultimately people didn't want to be shown to the person they're talking to. The internet gives you that anonymity – you could be anybody on the internet. So it's the same thing with surrogacy; it affords you that cloak of hiding your personal identity, and that's the other necessary requirement of any of these technologies succeeding."
---Other disturbing signs--Iggy Pop became a Lego, and Guitar Hero 5 resurrects Kurt Cobain.
---I find these UK film student offerings very compelling: 28 Days Later in one minute.
---The story of Leasse Williams in Ben Guest's 10 Dollars an Hour (with thanks to MetaFilter.com).
---Lady Gaga before she got famous (and harder to see).
---The importance of informational politics, a case study of our post-journalistic age, a bleak enough situation, and yet, people desire more news than ever.
---Catherine Grant's excellent list of film books available online.
---If you must execute, the advantages of a shot to the head.
---Could recent technological changes be good for literacy? Hogwarts, by the by, is not.
---The scourge of backstory rationing.
---A fun collection of scandalous magazine covers.
---Lastly, Eric Idle delightfully takes on the hating YouTube commenters.
Labels: Notable film and media links Surrogates

The Film Doctor said…
Then again, back then she was being ignored. Now, she's learned how to conceal herself and show off simultaneously. She's an evocative visual tease, and I like the way her videos are a logical extension of Madonna's work in her prime.
September 29, 2009 at 7:15 AM